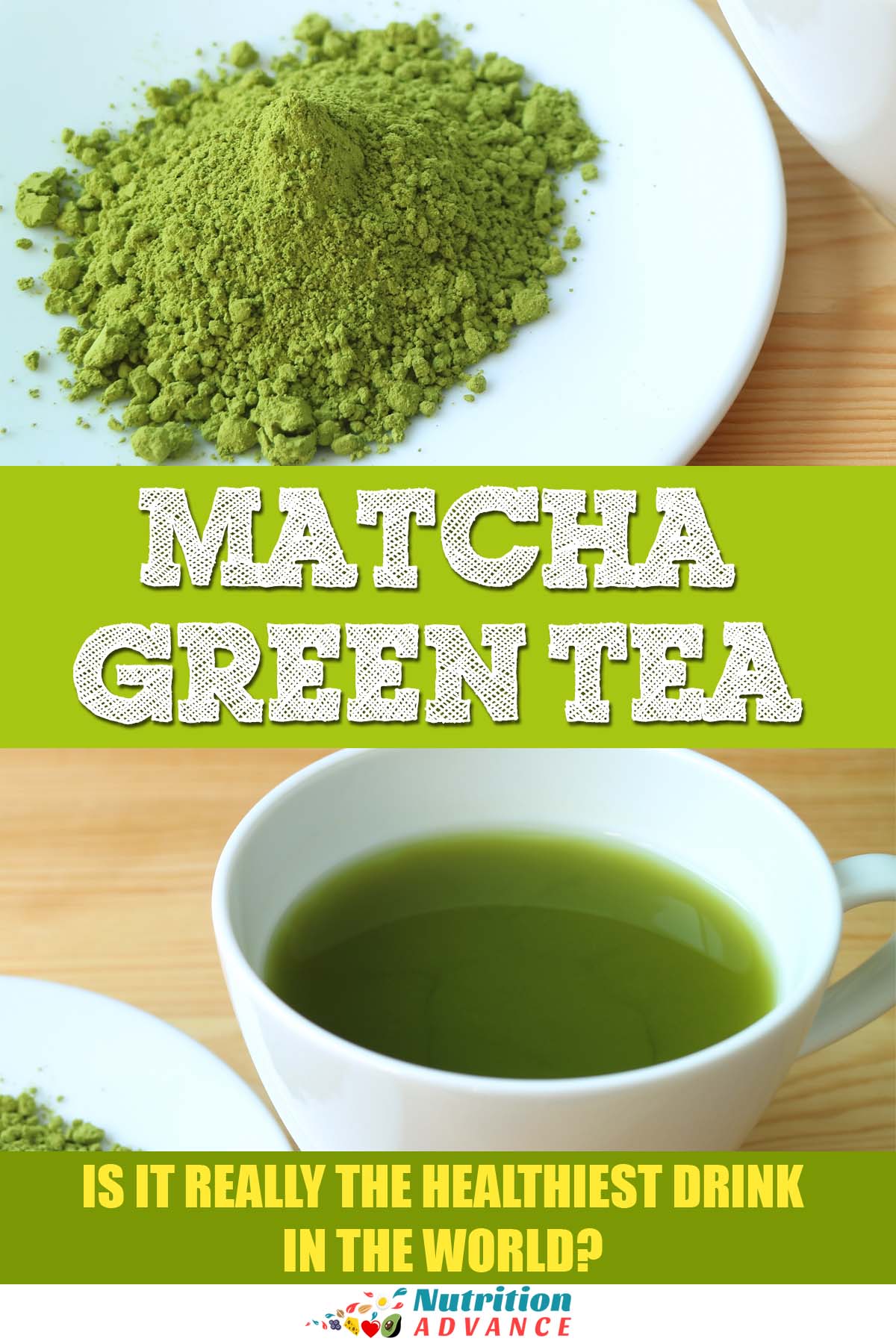 Matcha has become an increasingly popular tea drink in the Western world over the past few years.

This traditional Japanese tea is simply powder made from finely ground tea leaves, and when you drink it, you consume the whole leaf.

For this reason, marketing claims often state that matcha is a healthier choice than regular green tea.

But is this true?

And what benefits (and potential side effects) can matcha tea confer?

What Is Matcha Tea? 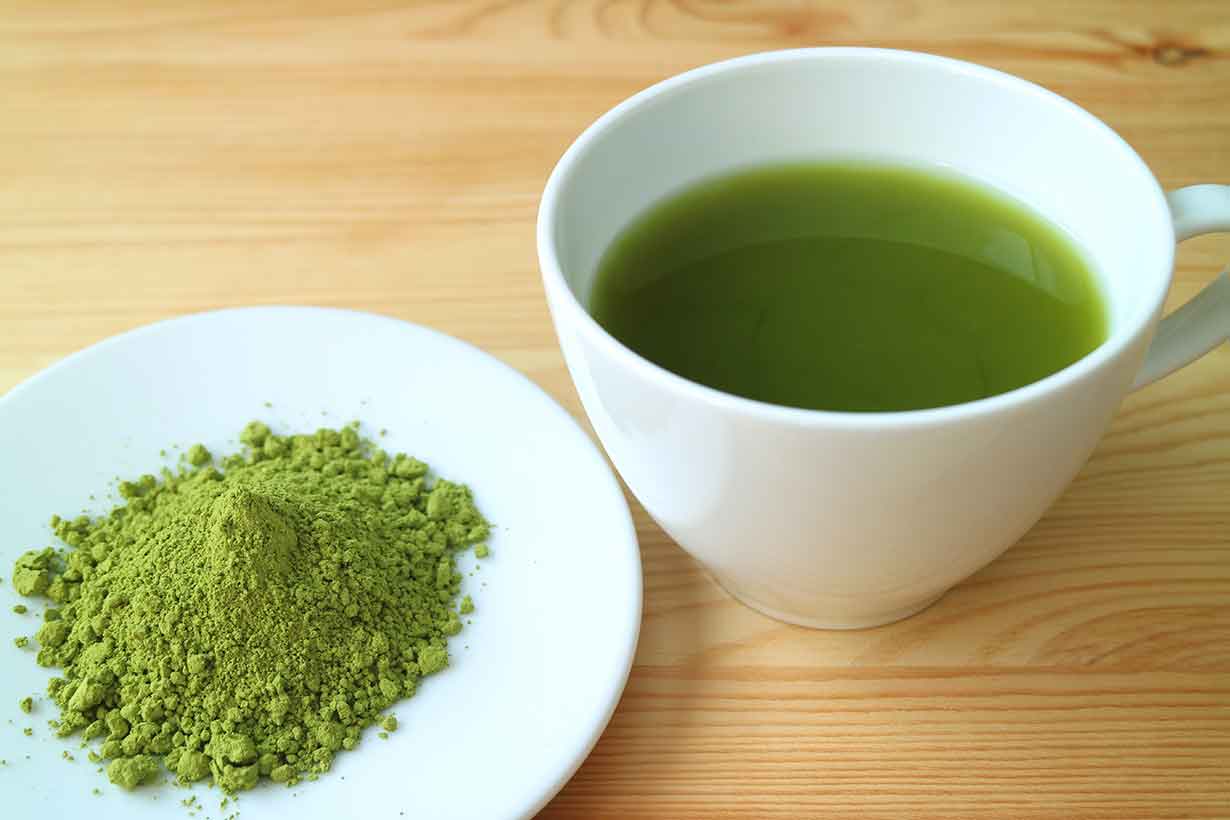 Matcha tea is a concentrated powder made by finely grinding high-quality tea leaves.

This tea has become prevalent throughout the world over the past decade, and there are all kinds of matcha tea powders now available. Additionally, the powder is the main ingredient in popular cafe drink products such as green tea latte.

When we mix matcha powder with hot water, the result is a tea with a bright green color and a strong, deep, slightly astringent flavor. This tea also contains much higher amounts of beneficial compounds than regular green tea.

It may already be obvious, but this greater concentration of compounds is because we are actually consuming the whole leaves rather than just tea water.

While many people view matcha tea as a “new” drink, it has roots going back to the powdered tea drinks of the Tang Dynasty during 7th century China.

In modern times, matcha tea has a highly specialized production process which ensures the quality (and nutritional value) of the tea.

Since genuine matcha tea producers still follow this traditional preparation method, matcha is relatively expensive due to the need for human labor.

Key Point: Matcha tea is a traditional tea drink with a very long history, and it provides all the benefits of green tea in a more concentrated form.

What Bioactive Compounds Does Matcha Contain?

First of all, we consume matcha tea in such small amounts (1-2 grams) that it contains very little in the way of vitamins and minerals.

However, matcha does contain a wide range of bioactive compounds that can affect our body, and these include;

Once again, as we consume the whole powdered leaf with matcha tea, these compounds are all present in more significant quantities than regular green tea. 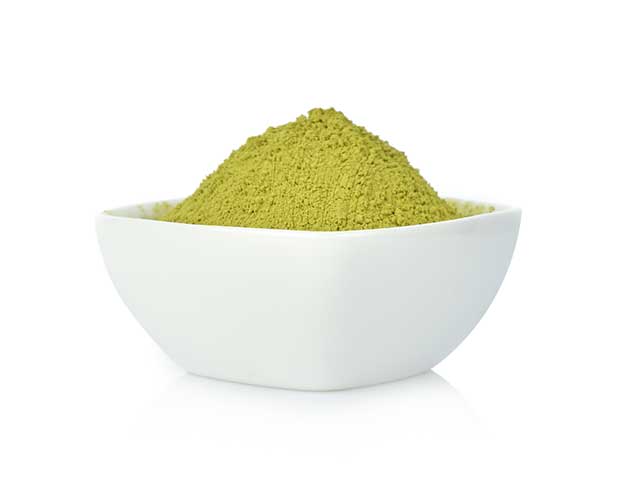 Matcha tea contains a greater concentration of polyphenols, sometimes called “antioxidants”, than most food and drinks. It is also a much better source of these compounds than regular green tea.

For instance, Consumer Labs spent three years testing and comparing matcha and regular green tea products, and they found that (7);

Until now, research involving epigallocatechin gallate suggests it may have various beneficial health effects, including anti-inflammatory and anti-atherosclerotic functions.

However, there is little evidence in the way of human clinical research at this stage, so we should take these claims in context (6).

There is a variety of research studies on the potential value of green tea catechins for weight loss.

However, significant claims about weight loss appear to be more about marketing than demonstrated research, and the effects appear to be small.

On this topic, recent studies showed;

While matcha tea does contain a significant amount of catechins, you would have to drink a lot of it every day to get these (relatively small) potential benefits.

Key Point: Matcha tea could potentially have slight weight loss benefits, but the evidence for this is unclear, and studies suggest they would be mild.

There is some better evidence for cognitive benefits from matcha and green tea catechins.

Firstly, a randomized controlled trial demonstrated that a realistic dose of matcha tea powder (4 grams) improved the performance of 23 participants in a cognitive test versus a placebo tea (10).

However, a further randomized controlled trial in elderly Japanese patients with existing cognitive dysfunction did not have the same finding.

Key Point: Matcha tea likely has some cognitive benefits due to compounds such as EGCG, caffeine, and L-theanine.

Some studies demonstrate that green tea consumption may have a positive impact on concentration and focus.

The combination of caffeine, EGCG and L-theanine is thought to be behind this beneficial effect.

On this note, several studies show that combining L-theanine and caffeine, even in low doses, improves attention and alertness (13, 14).

Further supporting the idea that matcha can beneficially affect focus, a review of 49 human intervention trials demonstrated that the combination of caffeine and L-theanine has “clear beneficial effects on sustained attention” (15).

Correlation does not infer causation, so take this one with a heavy grain of salt.

However, research shows that green tea drinkers have a lower risk of cardiovascular disease and death from any cause.

For example, large cohort studies and systematic reviews have found that (16, 17);

Unfortunately, this only proves an association, and we cannot confirm that it is actually drinking green tea that has this beneficial effect. For instance, green tea drinkers may care more about their health and follow a healthier overall lifestyle.

That said, it is possible that there could be some specific effect of green tea that helps to lower cardiovascular risk in green tea drinkers.

Generally speaking, one cup of matcha tea offers the same concentration of compounds as around three cups of regular green tea. As a result, drinking matcha is an easier way to get beneficial compounds responsible for such effects.

Key Point: Higher intake of green tea products is associated with a reduced risk of cardiovascular and all-cause mortality.

There are further claims of potential benefits from consuming matcha tea, but the evidence for these is unreliable, and the claims appear to be more about marketing.

For example, there are claims that compounds in green tea can protect against cancer, but there appears to be no solid research to support this.

In short, randomized controlled studies have shown that green tea interventions do not reduce the likelihood of various cancers, and there is no consistent evidence of any benefit from human studies (20, 21, 22).

However, this does not automatically mean that green tea offers no protective value in this regard. Since research in this area is ongoing, it is something that scientists have deemed worthy of study.

Additionally, there are some claims that compounds in green tea can function as an appetite suppressant and thereby help to reduce food intake. It may be true, but again, there doesn’t appear to be any strong evidence to support these claims from human trials.

There is one study that showed very high doses (752 mg) of the green tea polyphenol EGCG as an isolated supplement may lower subjective appetite. However, this subjective appetite was calculated by whether participants wanted to drink a “preparation of liquid consistency.” The researchers admitted that participants might not have found this offering appetizing (23).

More importantly, typical matcha tea powders only provide around 50 mg EGCG per gram, so you would have to drink a lot (24).

Key Point: Matcha tea may have further potential benefits, but the evidence-base for these is lacking.

Existing research supports the idea that matcha tea may help with;

There is a lack of strong evidence for;

Potential Side Effects and Concerns 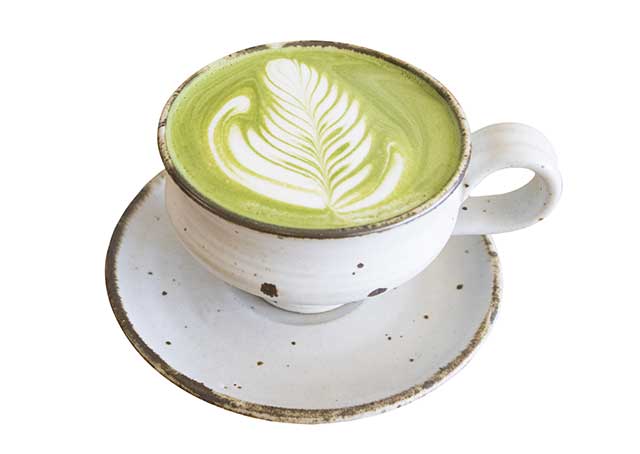 Most foods (and drinks) have both positives and negatives, and it is the same with matcha tea.

Here are some potential concerns to consider.

Heavy metal contamination, particularly with aluminum, is one of the biggest negative issues with green tea products (25).

Unfortunately, there have been several consumer recalls of matcha products over recent years due to aluminum contamination.

For example, there was a recent (November 2018) notification for a consumer recall of matcha tea sourced from Japan due to excessive aluminum levels (26).

However, as mentioned earlier on, most consumer tests of matcha tea show that it is free from contaminants (7).

Perhaps the main issue here is to buy from a brand you trust.

Key Point: Aluminium contamination can be an occasional problem for green tea products.

2) Lowers the Bioavailability of Iron

The main polyphenolic compound in matcha tea—EGCG—can bind to iron and inhibit the uptake of the mineral.

For example, studies show that this polyphenol inhibits heme iron absorption “in a dose-dependent manner” (26).

Also, presumably if EGCG binds to iron, then this may also lower the beneficial effects of the polyphenol.

As a result, it may be a good idea to consume matcha tea away from meals containing dietary iron (such as red meat).

However, studies show that this impairment of iron uptake may only negatively affect individuals with an already low intake of dietary iron (28).

Since matcha tea offers significantly more caffeine than regular green tea, it may not be suitable for individuals with caffeine sensitivities.

Studies show that excessive intake of the EGCG polyphenol may cause liver toxicity.

It is worth bearing in mind that matcha is a strong and concentrated source of the compounds in green tea, and we don’t need large amounts of it.

Overall, matcha tea is an interesting drink that may confer several benefits.

Among these potential benefits, the evidence is most reliable for the drink having a positive influence on focus and cognition.

However, much of the hype about matcha is driven by marketing or sensationalism, and as with any food or drink, it is not a “superfood” that can single-handedly make us healthy.

As part of an overall healthy lifestyle, a cup or two of matcha may offer benefits, but there is no substantial evidence for some of the more exaggerated claims.

For more information on herbal teas, see this guide to yerba mate.

Or for another tea with deep colorful shades, see this complete guide to butterfly pea flower “blue” tea.