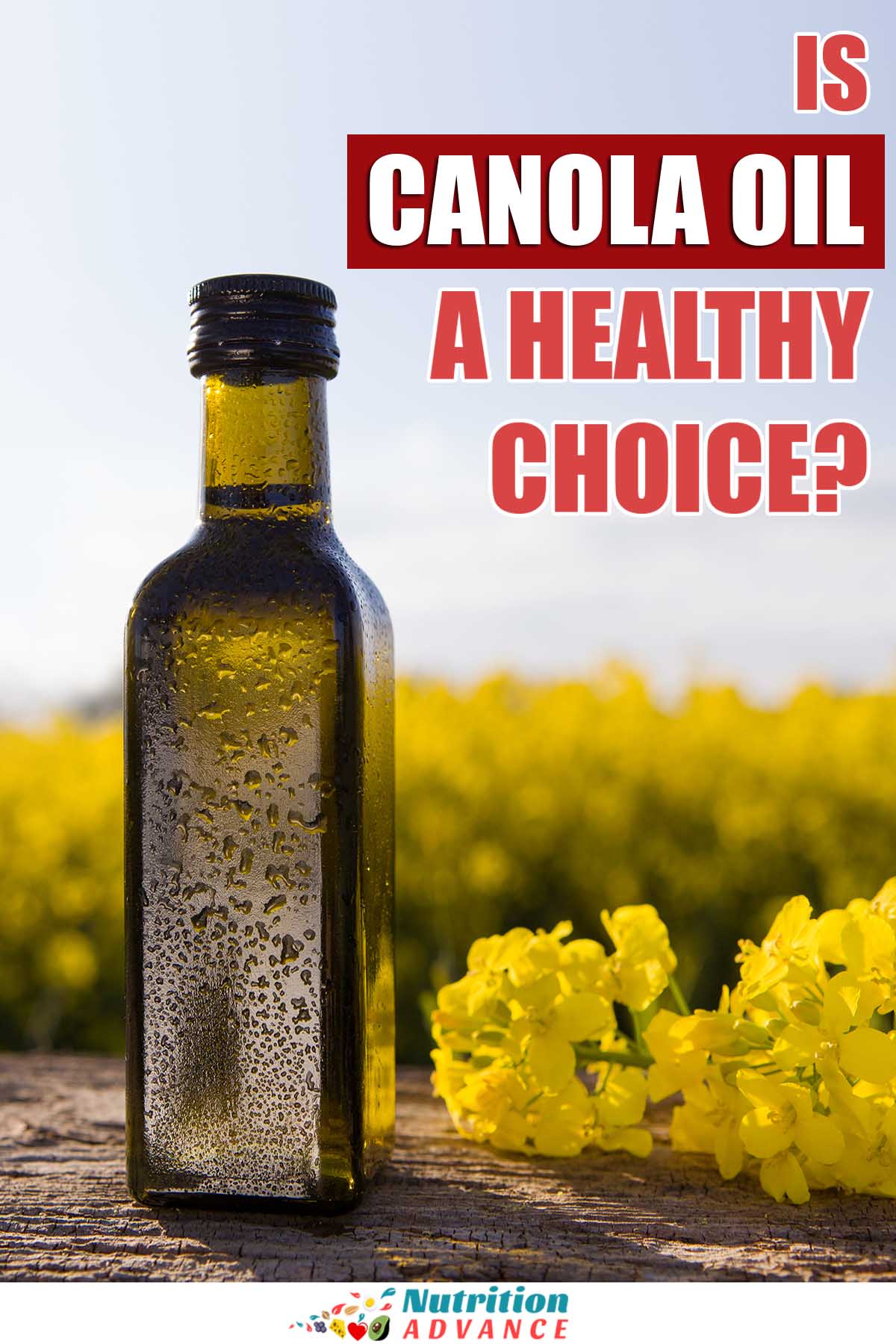 Canola oil is one of the most popular cooking oils in the world.

Sometimes we can hear people refer to canola as a “heart-healthy oil” due to its high unsaturated fat content.

What is the truth?

This article takes an objective look at the issue and examines what existing scientific research has to say.

What Is Canola Oil? 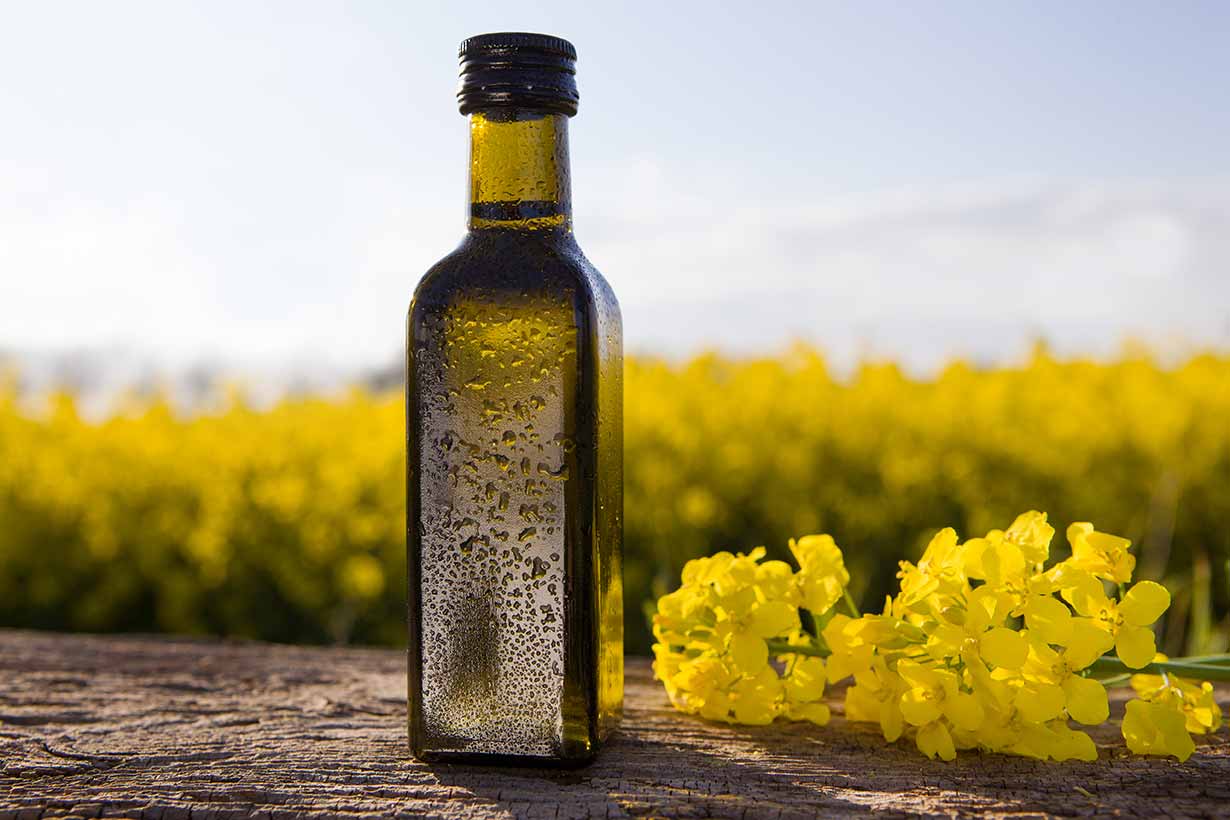 Canola oil is derived from the seeds of certain varieties of rape plant (Brassica napus) bred to contain low concentrations of erucic acid (1).

In some parts of the world, canola oil is referred to as ‘rapeseed oil,’ and the first rapeseed oils were introduced in the 1950s.

However, these oils contained high concentrations of a monounsaturated fatty acid called erucic acid, which could be anything up to 40% by weight (2).

Based on rodent studies, it was subsequently discovered that high concentrations of erucic acid had a potentially damaging effect on the heart (3).

Out of safety concerns, these initial rapeseed oils were removed from the market, and subsequently, rape plants were bred to produce low-erucic acid seeds.

At present, canola oil sold within the United States is regulated by the FDA and must contain no more than 2% erucic acid by weight. According to the European Food Safety Authority (EFSA), rapeseed oil for sale as food generally contains less than 0.5% erucic acid (2).

In small amounts, erucic acid is common in several other popular foods, with mustard being a notable example (4, 5).

Where Does the Name Canola Come From?

There is no such thing as a canola plant, so why the name ‘canola’?

Firstly, the first low-erucic acid rapeseed oils were produced in Canada in 1970, and a trademark for the oil was set up by the Rapeseed Association of Canada (6).

However, ‘canola oil’ is now used in many countries as a generic name for rapeseed oil, with the United States being a notable example.

In other countries, such as the United Kingdom, the oil is sold under the name ‘rapeseed oil.’

Key Point: Canola oil is also known by the name rapeseed oil, and it is a popular oil product made from the seeds of a type of rape plant bred for low-erucic acid content.

How Is Canola Oil Made?

There are two different production methods used to make canola oil, and which one depends on the type of oil:

The vast majority of canola oil is refined, bleached, and deodorized, otherwise known as an RBD oil.

However, let’s take a look at how the two varieties compare.

Cold-pressed oil can be produced by mechanically squeezing rape seeds in a piece of machinery known as an expeller press.

The initial oil produced from squeezing these seeds is referred to as cold-pressed canola.

For a deeper exploration of the cold-pressing procedure, there is an in-depth guide to the process here.

Following cold-pressing, the remaining seed solids may then go through a refining process to extract further oil.

The refining, bleaching, and deodorizing process involves the following steps:

As the refining process is much more efficient than cold-pressing, it is generally favored by canola oil producers.

On the slightly negative side, the deodorization process introduces a (small) amount of trans fats into the oil (7).

According to the USDA, canola oil contains approximately 0.4 grams of trans fat per 100 grams (8).

However, this is not unique to canola oil, and it is the same for any refined oil.

Key Point: It is possible to find cold-pressed and refined canola oil, but the latter represents the majority of global production.

You can find the basic nutritional values for canola oil per tablespoon serving and per 100 grams in the table below.

The source of the data is the USDA’s FoodData Central database (8):

As shown in the nutritional values, canola oil is very high in monounsaturated fat, with a moderate amount of polyunsaturated fat and relatively small amounts of saturated fat.

Compared to other popular oils, such as soybean oil, canola is much lower in polyunsaturated fat and higher in monounsaturated fat.

Generally speaking, cooking oils are poor sources of vitamins and minerals, and the same is true with canola oil.

However, a tablespoon serving provides small amounts of the following nutrients (8):

Key Point: Canola oil is primarily a source of monounsaturated fat, and it contains small amounts of vitamins E and K.

What Is the Smoke Point of Canola Oil?

For those unaware, the smoke point refers to the temperature at which the oil will break down and start to smoke. At this point, the fat will start to burn and produce progressively more smoke.

However, the smoke point of cooking oil is not the only consideration in this regard.

For instance, different oils have varying degrees of oxidative resistance. As fatty acids in fat oxidize, they generate breakdown products such as polar compounds and free fatty acids (11).

These polar compounds, such as aldehyde, are thought to be potentially harmful to human health via potential negative impacts on lipid metabolism and oxidative stress (11, 12, 13).

For this reason, we cannot judge the performance of cooking oils based on smoke points alone, and the oil’s oxidative stability also needs to be considered.

Does Canola Oil Have Any Benefits?

There are lots of opinions about canola oil, both positive and negative.

Thus, we should be looking for objective data from human randomized controlled trials when looking at its potential benefits.

Here is a summary of systematic reviews, meta-analyses, and randomized controlled trials that demonstrate benefits from canola oil intake.

Among the various studies, the fairly consistent effect that we can see is that canola oil consistently lowers LDL-levels without also lowering HDL.

Based on these results and the consensus stance that higher LDL levels are a risk factor for cardiovascular disease, canola oil intake appears to lower cardiovascular risk (18).

Does Canola Oil Have Any Downsides?

Perhaps the biggest concern about canola oil is the degree of oxidative stability it has. In plain English, this means how susceptible the oil is to breaking down/degrading at high heat temperatures.

Here is a summary of research investigating the oxidative stability of canola oil:

As seen in these studies, canola oil degrades and generates high polar compound levels at high-heat temperatures and when heated for extended periods of time. For regular home pan-frying at reasonable temperatures, this is unlikely to be an issue.

Key Point: Canola oil appears to generate high levels of polar compounds when cooked for long time periods or when heated at temperatures above 200°C.

Some Considerations When Cooking With Canola Oil

For those who prefer to use canola oil, what are some considerations when cooking with it?

Thirdly, the temperature is important. For instance, the study that showed canola oil to generate the most polar compounds out of common cooking oils when heated above 200°C over 20 minutes also examined the number of polar compounds generated at various temperatures.

How Does Canola Compare To Other Cooking Oils?

As shown in this article, canola oil tends to have a reliably consistent effect on lowering levels of LDL cholesterol, and this effect may appeal to some people.

However, as a refined and deodorized oil, it does also contain small amounts of trans fat.

Opting for a cold-pressed variety of canola oil, which doesn’t contain trans fat, can solve this issue for anyone holding concerns.

Several studies have shown that prolonged commercial frying can create unacceptable levels of oxidation products in canola oil. However, this should not be a concern with typical home use, providing that the temperature is controlled.

For those who want an oil that is more suitable for prolonged frying times or high-heat cooking, the various high-oleic options are worth investigating.

Extra virgin olive oil is another good choice in this regard, as it contains low levels of polyunsaturated fat, which is the most susceptible fat to oxidation. It also contains large numbers of polyphenols that help to protect against oxidation.

Here is some more detailed information on cooking with extra virgin olive oil.

Key Point: Canola oil has both potential positives and negatives when compared to other cooking oils.

People tend to have strong opinions about their favorite cooking oils, and it’s no different with canola oil.

Is it a healthy choice for cooking? The answer to that question probably depends on what each consumer is looking for.

For a commercial business exposing the oil to prolonged deep-frying conditions, perhaps there are better options.

For an individual looking for cheap and affordable cooking oil that lowers LDL, perhaps canola may tick the right boxes.

6) Canola Council of Canada. The history of canola oil. Available from: https://www.canolainfo.org/canola/the-history-of-canola-oil.php

14) Atefi M et al. (2018). The effects of canola and olive oils on insulin resistance, inflammation and oxidative stress in women with type 2 diabetes: a randomized and controlled trial. Available from: https://www.ncbi.nlm.nih.gov/pmc/articles/PMC6405399/

25 Types of Cooking Fats and Oils

Is Peanut Oil a Healthy Choice For Frying?