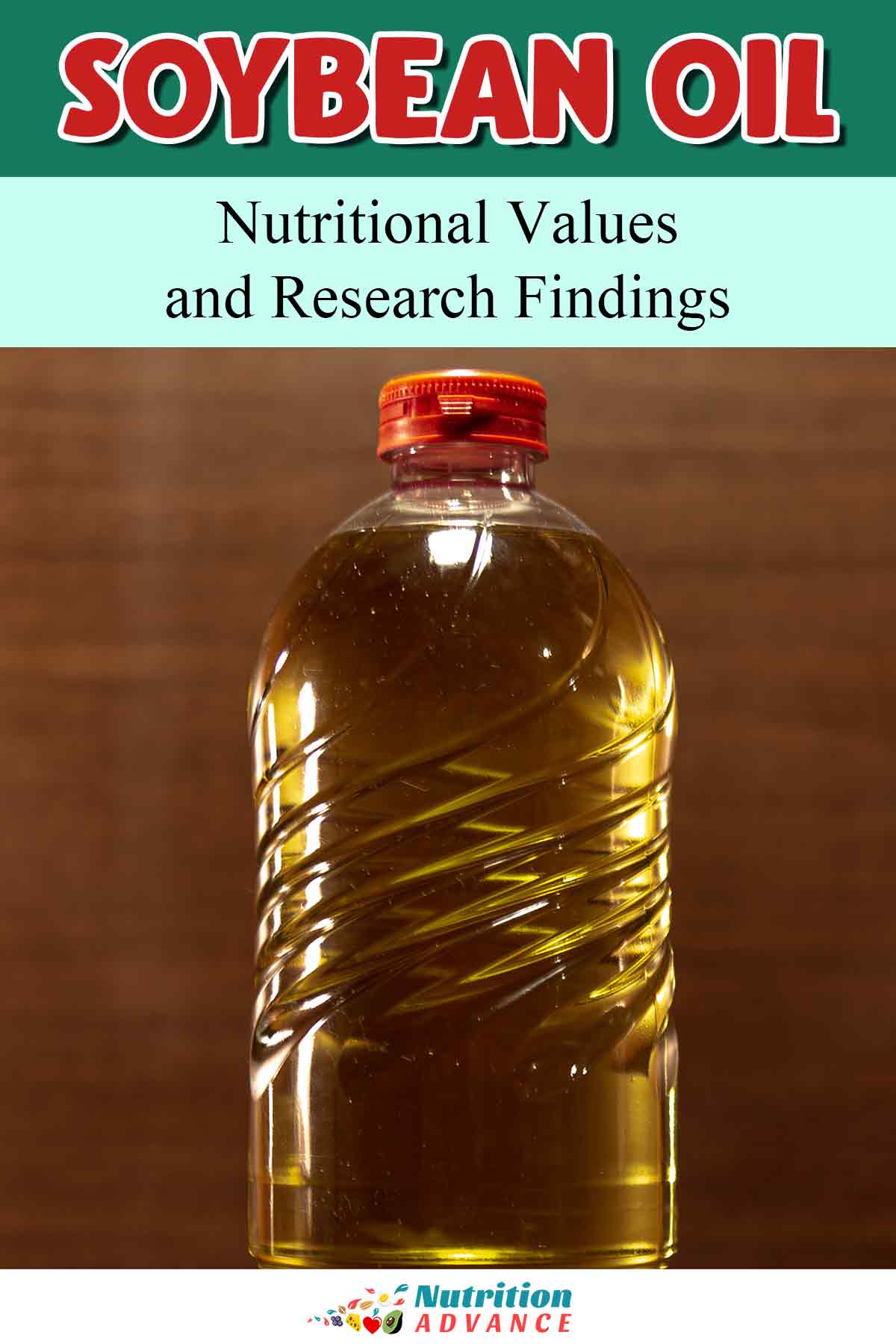 Soybean oil is a commercial cooking oil produced by extracting the oil from the seeds of the soybean plant (Glycine max).

This oil is incredibly common, and it is the second most-consumed vegetable oil in the world behind palm oil (1).

However, what does soybean oil offer nutritionally, and it is a good choice of cooking oil?

This article examines the nutritional values and scientific research on soybean oil. 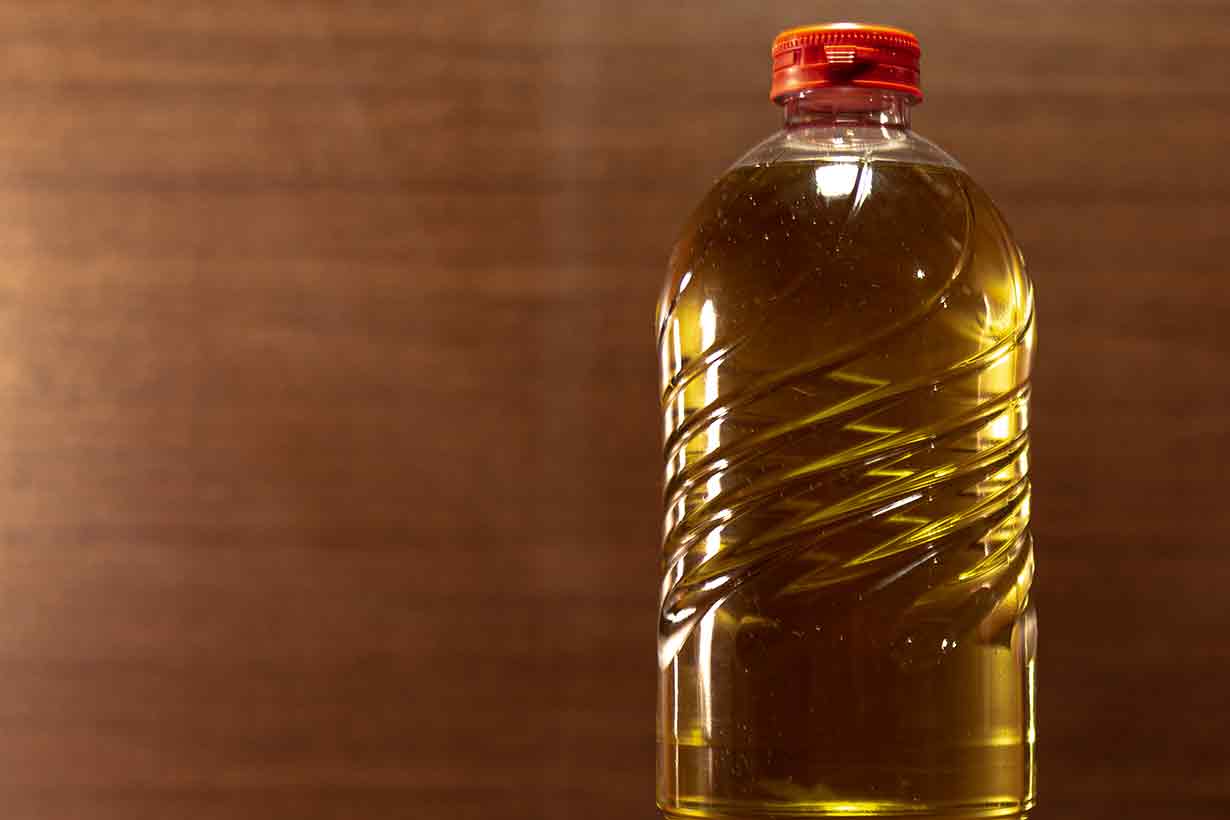 How Is Soybean Oil Made?

Soybeans contain approximately 20% fat by weight, but extracting their oils is quite tricky without the appropriate equipment (2).

Therefore, the majority of commercially produced soybean oil relies on a mechanical and solvent extraction process (3).

This process extracts the edible oil from the soybeans, and the finished product is known as a ‘refined, bleached, and deodorized’ (RBD) oil.

The entire production process is quite lengthy and complicated, but here is a quick summary of the primary steps:

Although this method of oil production may not sound as “clean” as cold-pressed oil, all the solvent residues are removed before the product can be sold.

Additionally, this process is not unique to soybean oil. For example, there are many different vegetable oils, such as grapeseed oil and Canola oil, that also undergo refining, bleaching, and deodorization processes.

Based on data from the USDA FoodData Central Database, the following table shows the nutritional values for a tablespoon (13.6 gram) serving of soybean oil (7).

Despite not being a major source of vitamins or minerals, soybean oil does provide moderate amounts of vitamins E and K.

The five primary fatty acids in soybean oil are as follows (9):

Linoleic acid is the predominant fatty acid in soybean oil, and it accounts for roughly 50% of the total fatty acids.

Key Point: As shown in the nutritional values, soybean oil is primarily a source of omega-6 polyunsaturated fat.

The smoke point of a cooking oil represents the temperature at which it starts to smoke. For instance, if soybean oil reaches the ‘smoke point’ temperature during cooking, it will begin to burn.

Unfortunately, when oil reaches its smoke point, the degrading oil can produce potentially harmful oxidation products such as acrolein (11, 12).

It is important to note that the smoke point of a cooking oil very much depends on the amount of free fatty acids (FFAs) present. A higher amount of FFAs results in a lower smoke point, and in turn, a lower level of FFAs means a higher smoke point (13).

Providing soybean oil does not reach its smoke point during cooking, the oil will not start to burn.

Another consideration to be aware of is that free fatty acids increase and the given smoke point of cooking oil reduces during heat exposure. This rate of decline depends on the oxidative stability of the specific type of cooking oil (16).

For this reason, the smoke point alone isn’t necessarily the best indicator of how heat-stable a particular oil is.

Various factors affect the oxidative stability of a specific oil, and these include:

Although soybean oil does contain vitamin E, it is primarily a source of polyunsaturated fatty acids, and refined oils contain very few polyphenols (22, 23).

For these reasons, soybean oil does not exhibit the same degree of oxidative stability compared to cooking oils like extra virgin olive oil.

One study investigated the rates of oxidative deterioration for soybean oil, corn oil, and olive oil when heated for 30, 60, and 90 minutes. After using the oils for frying at 180°C, soybean oil oxidized more (and faster) than the other two oils (24).

Another study showed that heating soybean oil at 185°C (365°F) for two hours led to the formation of 4-hydroxy-2-trans-nonenal (HNE). HNE is an oxidation product that has potentially harmful properties, but none of the unheated soybean oil samples contained this (25).

Many similar studies show comparable findings to the studies mentioned above, but the key here is the cooking time.

For regular home use, people will likely be using soybean oil for minutes rather than hours. For such short cooking times, the oxidative stability and smoke point are unlikely to be an issue.

As a result, the oxidative stability of the oil probably shouldn’t be a concern for most types of home cooking.

Key Point: Soybean oil has a high smoke point, but its oxidative stability is inferior to less unsaturated oils such as extra virgin olive oil.

May Lower LDL Cholesterol and Triglycerides

Soybean oil intake appears to have a beneficial impact on blood lipids.

A systematic review and meta-analysis recently published in the Journal of Lipid Research reviewed 54 existing trials to see how the intake of different cooking oils affected blood lipids.

According to this study, soybean oil consistently (26):

In this trial, each treatment group consumed 20 grams of mayonnaise per day for a total period of 28 days. Every meal aside from the mayonnaise was standardized so that no other dietary differences would influence the findings.

The results demonstrated that the soybean oil-based mayonnaise significantly reduced LDL cholesterol and total cholesterol compared to the palm oil mayonnaise. Additionally, there were no significant differences in blood glucose or markers of oxidative stress between the two treatment groups.

On this note, what does the scientific research say about linoleic acid intake?

First of all, large-scale studies appear to show a beneficial effect on cardiovascular mortality and total mortality from a higher intake.

As discussed, most studies support the idea of adding more omega-6 into the diet.

However, one important thing to note here is that many whole foods (such as nuts, seeds, grains, meat, and vegetables) contribute to dietary omega-6 intake.

Each of these foods also offers nutritional benefits from the various nutrients (such as fiber, protein, vitamins, and minerals) that are present (32).

Can Too Much Omega-6 Cause Inflammation?

Since a tablespoon of soybean oil contains seven grams of omega-6, it can be quite easy to consume large amounts of this fatty acid.

While most of the research on omega-6 fatty acid intake is positive, some researchers and publications have theorized about potential downsides of high intakes.

Some sources, such as Healthline, argue that an imbalanced intake of omega-6 to omega-3 “can lead to chronic inflammation.”

This claim by Healthline was supported by this published article, a peer-reviewed paper which argued that omega-6 and omega-3 should be consumed at a ratio of 1:1. The author of the paper explained that this 1:1 ratio was similar to the ratio seen throughout evolution and that deviations (higher omega-6) could lead to pro-inflammatory states.

There are also numerous research papers that discuss the possible mechanisms and pathways for how high intakes of omega-6 may potentially cause inflammation (33, 34, 35, 36).

Despite this, there have been several systematic reviews and meta-analyses that have analyzed the effect of dietary linoleic acid on inflammatory markers in humans.

Thus far, the consensus from these extensive reviews of randomized controlled trials is that there is no evidence of dietary linoleic acid having a significant effect on inflammatory markers in humans (37, 38).

However, there is one study that arguably suggests an excessive intake of omega-6 may potentially cause negative issues.

In a randomized controlled feeding trial, 217 participants were fed a diet for six months that was either:

The 40% fat (“high-fat diet”) primarily used soybean oil as the dietary fat source. Further, this diet led to adverse changes to the gut microbiome and an increased level of inflammatory markers compared to the lower fat diets (39).

That said, it is difficult to claim with any degree of certainty that these results were explicitly caused by soybean oil. For instance, it could have been the high-fat content of the diet in general, the removal of beneficial whole foods in the diet to increase the fat content or several other factors.

Key Point: There is little evidence from human trials that the primary fatty acid in soybean oil causes inflammation.

Do Any Human Trials Show Harm From Soybean Oil?

There have been no human trials that show harm specifically from soybean oil.

However, there have been some observational studies that suggest omega-6 vegetable oils (such as soybean oil) could feasibly have detrimental properties. But these studies do not conclusively show this, and it is possible to interpret them in different ways.

One of these studies was a meta-analysis of data from the Sydney Heart Study, a randomized controlled trial that had 458 human participants. The Sydney Heart Study ran from 1966 until 1973 and examined the impact of replacing saturated fats (from sources like animal fat) with omega-6 fats from cooking oils (40).

Although this study did not specifically use soybean oil, it used another vegetable oil (safflower oil) with a similar fatty acid profile.

This meta-analysis found that replacing saturated fats with omega-6 fats from cooking oil led to a slightly increased risk of all-cause mortality and cardiovascular mortality.

However, it should be noted that not only vegetable oil but also margarine made from safflower oil was included as a source of omega-6.

This inclusion could be a potential confounder in the results of the study since margarine (particularly in the sixties and seventies) was a significant source of trans fats, which are associated with an increased risk of cardiovascular disease in a dose-response fashion (41).

Based on the nutritional values and scientific findings covered in this article, here is a summary of the main points:

Is Canola Oil a Healthy Choice?