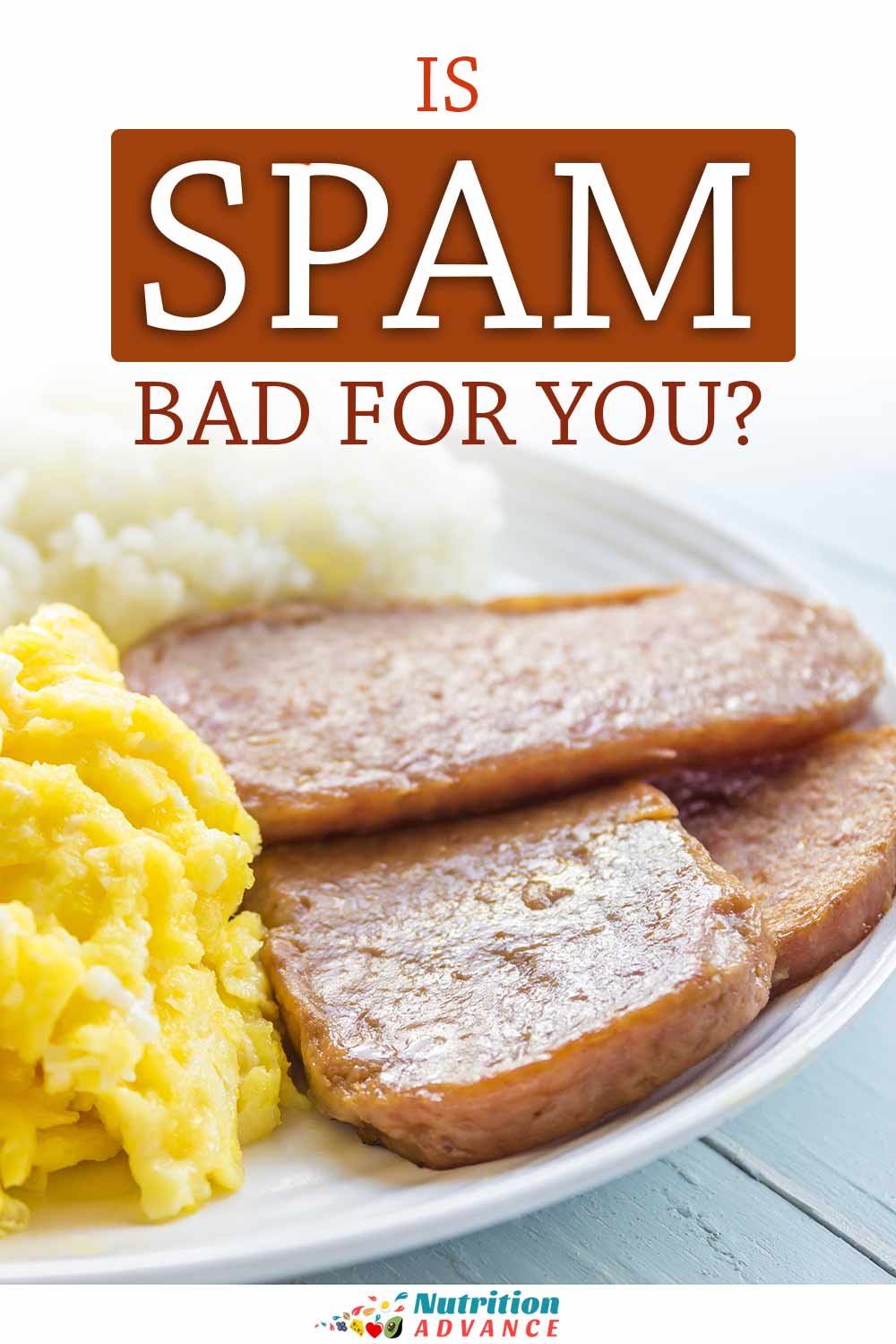 Some people love the taste of spam.

On the other hand, many think of it as an ultra-processed meat product with questionable nutritional value.

Is spam really bad for you? Does it have any beneficial properties? And just what is it?

This article provides a complete guide to spam.

Spam is a brand of canned pork that is popular around the world. Also, it is perhaps the most popular brand of processed meat.

A company called Hormel Foods launched spam in the year 1937, shortly before the start of World War 2.

Although the story behind the name ‘spam’ is a bit of a secret, the brother of a vice president at Hormel Foods called Ken Daigneau named it (1).

During World War 2 and the years following the war, spam became an important food product for soldiers. Additionally, due to spam’s shelf life and ease of transportation, it became a standard export for countries needing food aid (2).

A later example came with the integration of spam into South Korean cuisine. This integration happened after soldiers introduced it to the local population during the Korean war (3).

At present, spam is a staple food in Korea. In 2019, it hit a sales record by selling the equivalent of 24 cans for every person in Korea over the year (4).

What Ingredients Does Spam Contain?

Spam is made from what the company that makes it refers to as ‘six simple ingredients’, and these include (5):

The ingredients label lists the pork content of spam as 89%, and the other five ingredients make up the remaining 11%.

Key Point: Spam is a popular processed meat product made from pork.

Based on USDA data, here are the nutritional values for spam per 3.5 oz (100-gram) serving (6). Daily values have been calculated using USDA data and the FDA’s recommended daily values (7).

Key Point: Spam is a moderately good source of protein and it contains various vitamins and minerals. Spam also has a high sodium and fat content.

Here are some of the beneficial properties of spam.

It offers a Broad Range of Vitamins and Minerals

Spam sometimes gets a bad name because it is a form of processed meat.

However, as seen in the nutritional values section, it is a good source of several vitamins and minerals.

Among these nutrients, spam contains more than 10% of the daily value for B vitamins, choline, sodium, selenium, zinc, and phosphorus per 3.5 oz (g) serving (6, 7).

Since spam is approximately 90% pork by weight, it shares a similar nutritional profile and much of the same nutritional benefits.

Another benefit of spam is that it has a long shelf life and can be stored and transported easily.

As previously mentioned, the best example is the use of spam by soldiers during World War 2.

All cans of spam have been pre-cooked, making it a food that is easy to store and prepare. Therefore, this removes worries about quickly using it within a short timeframe like fresh meat.

These are properties that may appeal to some people.

Key Point: Spam is a source of several important vitamins and minerals, and it has a long shelf life.

Here are some of the potential downsides.

The recommended daily value for salt is 2300 mg (7). Additionally, the Dietary Guidelines for Americans 2020-2025 recommended that people consume less than 2,300 mg of sodium daily (8).

In other words, 100 grams of spam contain 61% of the recommended daily sodium limit.

The higher the level of sodium reduction, the more blood pressure fell in the participants.

This relationship existed “across the entire range of dietary sodium exposure” (11).

Alongside other types of processed meat like bacon and some cured meats, spam contains sodium nitrite.

Sodium nitrite is a type of preservative that has several valuable functions as a food ingredient (12):

Nitrates and nitrites are a natural component of many vegetables, and we can also find them in drinking water (13).

However, nitrite can react with amino acids (proteins) during high-heat cooking to form nitrosamines. Furthermore, nitrosamines can also form in acidic environments like the stomach (14).

Nitrosamines have been found to be carcinogenic (15).

Thus, it is widely thought that a diet rich in nitrite/processed meats can increase cancer risk through greater exposure to nitrosamines.

Large observational studies appear to support this, with several studies finding associations between higher processed meat intake and cancers of the digestive system, amongst others (18, 19, 20).

How Big is the Risk From Processed Meat?

Firstly, it is important to note that these studies show very little increase in risk in the lowest consumption categories (i.e. <1.5 servings per week).

Furthermore, the findings suggest the risk is more significant at the highest intake levels, with multiple weekly servings.

Despite this, the World Cancer Research Fund (WCRF) recommends “eat little, if any, processed meat” (21).

The Dietary Guidelines for Americans, 2020-2025 advise that “most intake of meats and poultry should be from fresh, frozen, or canned, and in lean forms (e.g. chicken breast or ground turkey) versus processed meats” (22).

The United Kingdom’s National Health Service (NHS) doesn’t differentiate between red meat and processed meat. However, the NHS recommends that “if you currently eat more than 90g (cooked weight) of red or processed meat a day, the Department of Health and Social Care advises that you cut down to 70g” (23).

As shown, there is a consensus among major health organizations that processed meat intake should be limited.

This guidance does not mean that we shouldn’t ever consume processed meat, and small amounts are unlikely to be a big issue. However, as demonstrated, higher intakes are associated with detrimental health outcomes.

Lower in Protein and Higher in Fat Than Most Meat

Another important point about spam is that it has approximately twice the fat content as protein.

With 26.6 grams of fat and only 13.4 grams of protein per 100 grams, spam does not offer the same protein characteristics as most fresh meat (6).

Note: see this article for the leanest meat options.

The Dietary Guidelines for Americans recommends keeping saturated fat intake below 10% of total calories (22). This would be about 22 grams of saturated fat (200 calories) based on a 2000-calorie diet.

Key Point: Spam contains high levels of salt and sodium nitrite. Additionally, it has less protein and more fat than most fresh cuts of meat.

While there was initially only one variety of spam, numerous variations are now available.

According to the spam website, here are the different spam product varieties available at retail:

Based on this, there are fourteen varieties of spam available at retail.

How To Use Spam

There are many ways to use spam, some of which may seem quite surprising.

For instance, in Japan, ‘spam musubi’ is a popular sushi-like (just replace the fish with spam) combination of seasoned spam and rice.

Korean ‘army stew‘ is a fusion dish of Korean-style ingredients like noodles, mushrooms, tofu, and kimchi alongside spam in a spicy sauce.

Then there are the more typical options, such as spam fritters and sandwiches.

Final Thoughts: Is Spam “Bad” For You?

Spam is popular in many countries and offers a taste many people enjoy.

However, some people who enjoy spam may also worry after hearing claims of it being “bad for you.”

Is there a reason to worry?

Firstly, the consensus from current research is quite evident in that we should limit our processed meat intake. As a result, spam isn’t a food that should play a prominent role in our diets.

However, this does not mean that we cannot include it in our diet from time to time. For instance, the absolute risks from consuming low amounts of processed meat are relatively small and not significantly different from non-consumption.

A serving or two each week probably isn’t worth too much worry, but higher intakes are associated with an increased risk of detrimental outcomes, according to the current evidence.