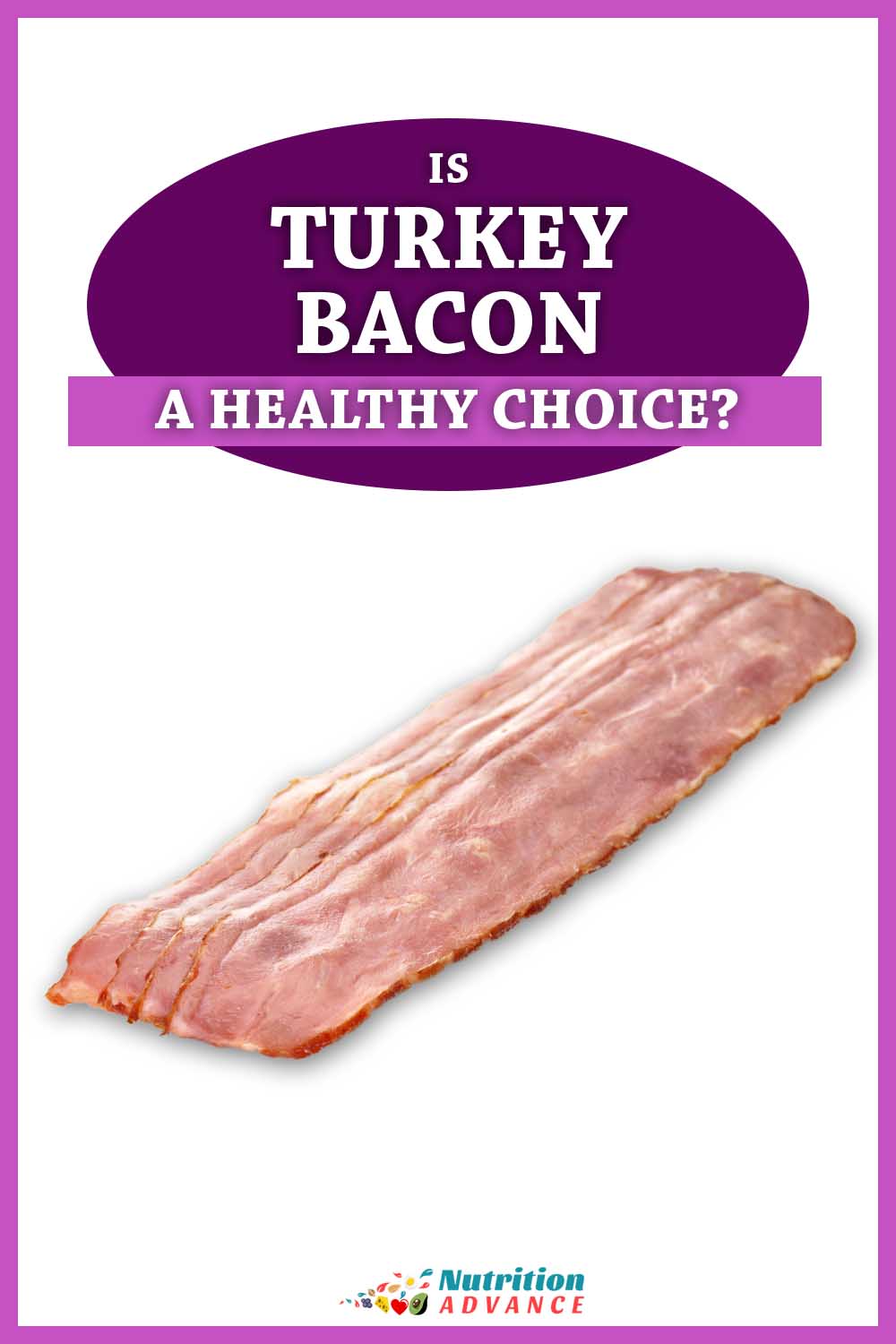 However, is this accurate?

This article provides a guide to turkey bacon and how it compares to regular (pork) bacon.

What Is Turkey Bacon?

Turkey bacon resembles regular pork bacon; it looks somewhat the same, is smoked and salted, and has a slightly similar taste.

However, it is made from turkey instead of pork. Since turkey is a leaner meat, it has fewer calories.

What Is Turkey Bacon Made Of?

Firstly, if we look at regular bacon, it comes from a specific cut of pork.

In the United States, that cut is pork belly. However, bacon comes from pork loin/back in Canada, and in the United Kingdom, a cut of bacon includes both pork belly and pork loin.

In contrast, turkey bacon is slightly different as it does not come from any specific cut of meat.

The production of turkey bacon involves grinding dark and light turkey meat and combining them with various other ingredients. After this, the producers press the turkey into strips that resemble bacon and (sometimes) smoke them (1).

The ‘various other ingredients’ include salt, seasonings, and preservatives.

To be more precise, here are the ingredients in the ‘Oscar Mayer brand of turkey bacon made by Oscar Meyer, according to USDA data (2):

It is worth noting that, aside from turkey, sugar, and salt, the remaining ingredients were ‘2% of less’ of the ingredients.

Key Point: Turkey bacon is a bacon product made from a mix of dark and light turkey meat, seasonings, and preservatives. It is marketed as a lower-fat alternative to regular bacon.

How Does Turkey Bacon Compare To Regular Bacon Nutritionally?

The table below shows the basic nutritional data for turkey bacon, American bacon (pork belly), and Canadian bacon (pork loin). All of this data is courtesy of the USDA FoodData Central database.

Since each type of bacon has a different slice weight, the table presents the nutritional values per 100 grams/3.5oz cooked weight (3, 4, 5).

As we can see from this data, turkey bacon contains approximately 33% fewer calories than regular bacon. This difference in calorie provision is primarily due to the lower amounts of fat in turkey bacon.

Per slice, here is how this nutritional data translates (note there is a difference in slice size):

It is also important to note that ‘low-fat’ turkey bacon options exist, and they are much lower in calories and fat than regular turkey bacon.

In some countries, these might be the most prevalent varieties of turkey bacon found on store shelves.

For example, a ‘94% fat-free turkey bacon’ produced by the ‘OUR FAMILY’ brand provides the following nutritional values per 100 grams as sold (6):

Is Turkey Bacon a Healthy Choice?

When asking if a particular food is “healthy,” we always need to consider what it might replace in the diet.

For this article, we will presume turkey bacon is a replacement for regular bacon.

There are four areas in which we can compare turkey bacon and regular pork bacon:

Turkey Bacon Has Fewer Calories and a Lower Fat Content

First of all, there is nothing wrong with consuming higher-fat and higher-calorie foods providing they are part of a sensible overall diet.

However, turkey bacon offers a similar experience to regular bacon for fewer calories for people trying to reduce their energy intake. As a result, turkey bacon may be a helpful choice for individuals with weight targets.

When consumed excessively, saturated fat can cause a substantial rise in low-density lipoprotein cholesterol (LDL-C) levels (7).

The extent of this effect can vary from individual to individual, but across the population, higher LDL-C levels are strongly associated with a higher risk of cardiovascular disease (8, 9).

Once again, there are also low-fat turkey bacon options. These options will be more beneficial for those trying to consume fewer calories and grams of fat.

The sodium levels within bacon and turkey bacon can vary from product to product and brand.

However, neither regular bacon nor turkey bacon is ideal for low-sodium diets, and they both have high salt levels.

If monitoring sodium intake, the best thing to do is to check the nutrition label of potential purchases. Checking the label will allow a clear view of how much salt/sodium the different available bacon products contain.

One argument for turkey bacon potentially being a healthier choice would be that it is a type of poultry.

In contrast, regular bacon (pork) is a form of red meat.

Some people may see turkey bacon as ‘healthier’ because red meat is consistently associated with a higher long-term risk of cardiovascular disease and colorectal cancer. However, turkey (and other forms of poultry) are not (10, 11, 12).

It is important to note that these are associations rather than proof of causality.

That said, some mechanisms may explain why a high intake of red meat is associated with these risks, and these include:

This topic is complex and requires nuance, though. Furthermore, according to the data, the relative risks for the individual are small.

See this article on red meat’s potential health effects (both positive and negative) for more information.

The preservatives sodium nitrate and sodium nitrite, commonly referred to as nitrates or nitrites, are common ingredients in bacon.

Again, nitrate and nitrite are other food components that have been associated with colorectal cancer risk (17, 18).

However, turkey bacon contains these preservatives in just the same way as regular bacon does.

In terms of relative risk (for the individual), if 30 out of 1000 people were to develop colorectal cancer, dietary nitrate might be responsible for raising this number (by 13%) to 33.9 people out of 1000.

As we can see from this, the risks are small for each individual but still represent a significant population-level risk.

Key Point: Since both turkey bacon and regular bacon contain nitrate/nitrite, there is no reason to choose one over another for this reason. It is fair to say that unprocessed turkey meat is likely a healthier choice than turkey bacon.

Here is the full nutritional profile for regular turkey bacon, per 100g cooked weight, based on data from the USDA FoodData Central database (3).

As the table shows, turkey bacon is primarily a source of bacon and fat. Most of the fat content is from saturated and monounsaturated fatty acids.

Key Point: Turkey bacon is an excellent source of protein and numerous vitamins and minerals. On the downside, it contains large amounts of salt.

To summarize all the information in this article, here are some reasons to choose turkey bacon and some reasons not to.

Reasons Not To Choose Turkey Bacon