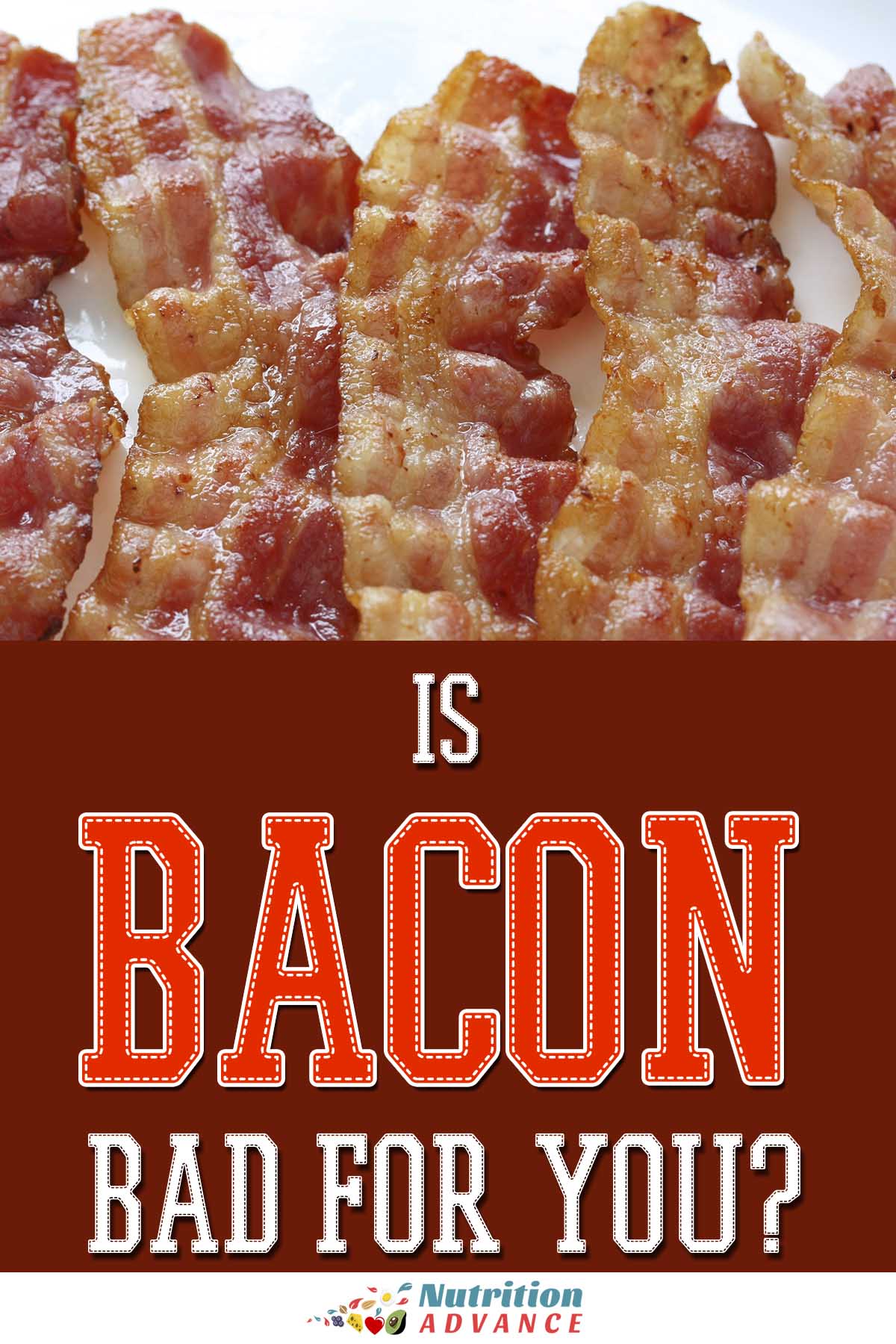 Bacon is one of the most popular meats in the world.

There is a good reason for this too; bacon tastes delicious.

However, the health effects of bacon are a controversial topic, and the media widely report on it as an unhealthy choice.

But is bacon as bad for you as people say?

When reading articles on bacon, this is often hard to understand because most adopt a pro-bacon or anti-bacon stance.

In this article, we take a factual look at the pros and cons, backed by evidence.

First of all, bacon is no different from pork regarding the specific nutrients it provides.

Among these nutrients, 100 grams (3.5 oz) of bacon provides particularly high amounts of (1);

B vitamins play a crucial role in energy production and brain health, and B12 is vital for the prevention of anemia (2).

Additionally, bacon is an excellent source of the minerals selenium and zinc.

Zinc and selenium are both critical for the proper production of hormones such as testosterone and thyroid hormone. Selenium also activates various enzymes, known as selenoenzymes, that function as antioxidants in the body (3, 4).

We will go through the full nutrition profile of bacon a little later on in this article.

One of the most common concerns about bacon is the sodium nitrate and sodium nitrite it contains.

Producers add these compounds to bacon during the curing process. Firstly, nitrates and nitrites have an important function; they act as preservatives and also protect against bacterial growth (5).

As a result, bacon has a longer shelf-life, and the meat stays a pink (rather than brown) color.

It is a widely held belief that these compounds are harmful to health, but this depends on what happens to them in the body.

In short, nitrites may convert to nitric oxide, which is beneficial for our health. On the other hand, they may also form nitrosamines, which are harmful (6).

What Are Nitrosamines and How Do They Relate To Bacon?

Nitrosamines are carcinogenic chemical compounds, and long-term high levels of intake are thought to increase the risk of cancer (7).

However, the formation of nitrosamines relies upon (8);

Smaller amounts of nitrosamines may also form in acidic environments, such as in the stomach (9).

It is also worth noting that many vegetables contain large amounts of nitrite, but they do not seem to be as significant a risk for nitrosamine formation. However, there is not a substantial amount of research in this area (10).

Research has shown that there are ways to inhibit nitrosamine formation, particularly during the cooking process.

For instance, the temperature used when cooking bacon plays a big part. Studies in this area have shown that (11, 12);

In other words; avoiding high-heat temperatures can minimize the amount of nitrosamine that forms.

However, anyone with concerns regarding nitrosamine formation could also consume a source of vitamin C alongside their bacon.

Key Point: Bacon contains sodium nitrite, which can potentially form carcinogenic nitrosamines in the body. However, there are ways to minimize this risk.

In the last section, we looked at the potential for nitrite-containing bacon to form nitrosamines.

On this note, it is worth mentioning that we can also buy unprocessed bacon.

The only ingredients this form of bacon contains are usually pork belly, salt, and possibly a tiny amount of sugar.

Therefore, it does not have the same nitrosamine concerns.

Providers often refer to this food as “fresh bacon.” A local butcher may be able to supply or at least advise on where to find this locally.

It is also possible to buy “uncured” bacon, and this version of the meat does not use nitrites. However, the name is a bit misleading because it is still cured.

Instead of using sodium nitrite, producers of this so-called “uncured” bacon cure it with celery juice powder, which is a source of naturally-occurring nitrites.

That said, there is currently no research that suggests this form of added nitrite is any different than the regular version.

Uncured bacon is widely available from retailers such as Whole Foods, and it is also possible to buy it online.

Key Point: If nitrosamines are a concern, then it is also possible to buy fresh bacon without nitrites.

4) Bacon Is Not Nutrient-Dense

As previously mentioned, bacon is a good source of several essential nutrients.

However, it is not nutrient-dense.

Nutrient density refers to the quantity of nutrients food offers compared to the energy (calorie) content of that food.

The following table provides a quick example of how bacon compares to several other types of meat for nutrient density (1, 14, 15);

As shown, bacon is a calorie-dense food, and it does not offer the same nutrient-density as other meats.

Key Point: Bacon is not as nutritious as other forms of meat.

Although it is not among the most protein-dense of foods, bacon does offer a high-quality source of protein.

Similar to all types of meat, bacon is a complete source of protein, and it has excellent bioavailability (16).

Bacon also contains a significant amount of glycine—2700 mg per 100 grams—which makes it among the best dietary sources of this amino acid (17).

Glycine has several key health benefits, and it can help to regulate inflammation and immune function (18).

6) The Main Fatty Acid In Bacon Is Oleic Acid

The media likes to exaggerate the harms of bacon, and we can often see mentions of “artery-clogging fats” in such stories.

Interestingly, though, monounsaturated fatty acids are the primary source of fat in bacon, and the most prevalent of these is oleic acid.

Oleic acid is also the primary fatty acid in plant foods such as avocados and olives. Also, the media often refer to oleic acid as “heart healthy” due to its purported heart health benefits (19, 20).

There is nothing particularly bad about this fat content.

For those with concerns about the saturated fat content of bacon, some options, such as turkey bacon contain a lower fat content.

Sodium, largely provided by salt, is an essential mineral that has a wide range of functions in the human body (22).

However, large amounts of salt can be problematic for certain groups of individuals including;

Research shows that, for these individuals, high salt intake can cause significant increases in blood pressure (23, 24).

For this reason, those with salt sensitivity issues may prefer to limit bacon consumption.

Key Point: Bacon contains large amounts of salt, which may be a concern for those who are salt sensitive.

Epidemiological (observational) studies link processed meats such as spam and cured meats, including bacon, with a higher risk of colorectal cancer (27).

In a recent observational study that charted the health of 475,581 individuals for more than five years, participants who consumed the highest amounts of processed meats had a 20% increased risk of colorectal cancer (28).

However, this 20% risk was a relative risk rather than absolute risk.

This relative risk means that if 0.4% of participants eating low amounts of processed meat had developed colorectal cancer, then 0.48% of people eating high amounts would have developed it.

In other words; according to the study, the risk for the average person would still be low whether they had a high or low intake of processed meat. As usual, the media headlines of “20% increased risk” that followed this study exaggerated the true extent of the risk.

Furthermore, observational studies on processed meat and colorectal cancer can only show a link, but they can not establish causational proof.

There is also the fact that processed meat can mean many different things.

For example, a hot dog in a white bread bun served alongside French fries and cola is a meal containing processed meat. Alternatively, some prosciutto alongside cheese and fresh fruit is also a meal that contains processed meat.

Do these two meals have the same impact on health? Probably not.

However, the fact remains that observational studies do consistently show that processed meat intake is associated with colorectal cancer risk.

Key Point: Observational studies suggest that higher bacon intake may raise the risk of colorectal cancer, but the absolute risks are often exaggerated.

9) Bacon Tastes Delicious and Many People Enjoy It

Lastly, bacon tastes delicious. The breakfast pairing of bacon and eggs is hard to beat, and it is one of the most popular combinations in the world.

Is it the healthiest meal we can eat?

No, but if someone enjoys eating bacon, do the slight health risks according to observational studies justify giving it up?

In my opinion; no, but that is up to each person to decide.

Key Point: Bacon is one of the most popular foods around the world.

Before we finish, here are the full nutritional values for bacon per five slices (1).

Just like cured meats in general, bacon isn’t as bad for you as the media often makes out.

Despite the fears over nitrosamines, the observational data only show minor increases in absolute risk.

Bacon isn’t the most nutritious food in the world, but it does offer a good source of protein and several essential nutrients.

Bacon also tastes delicious, and for many people, that is a good enough reason to enjoy it.

That said, unprocessed meat is a healthier and, generally speaking, more nutrient-dense choice. There is also nothing in bacon that we can’t get in higher amounts from other foods.

For more meat articles, see here for the nutritional benefits of duck meat.

4 thoughts on “Is Bacon Really Bad For You? 9 Things To Consider”