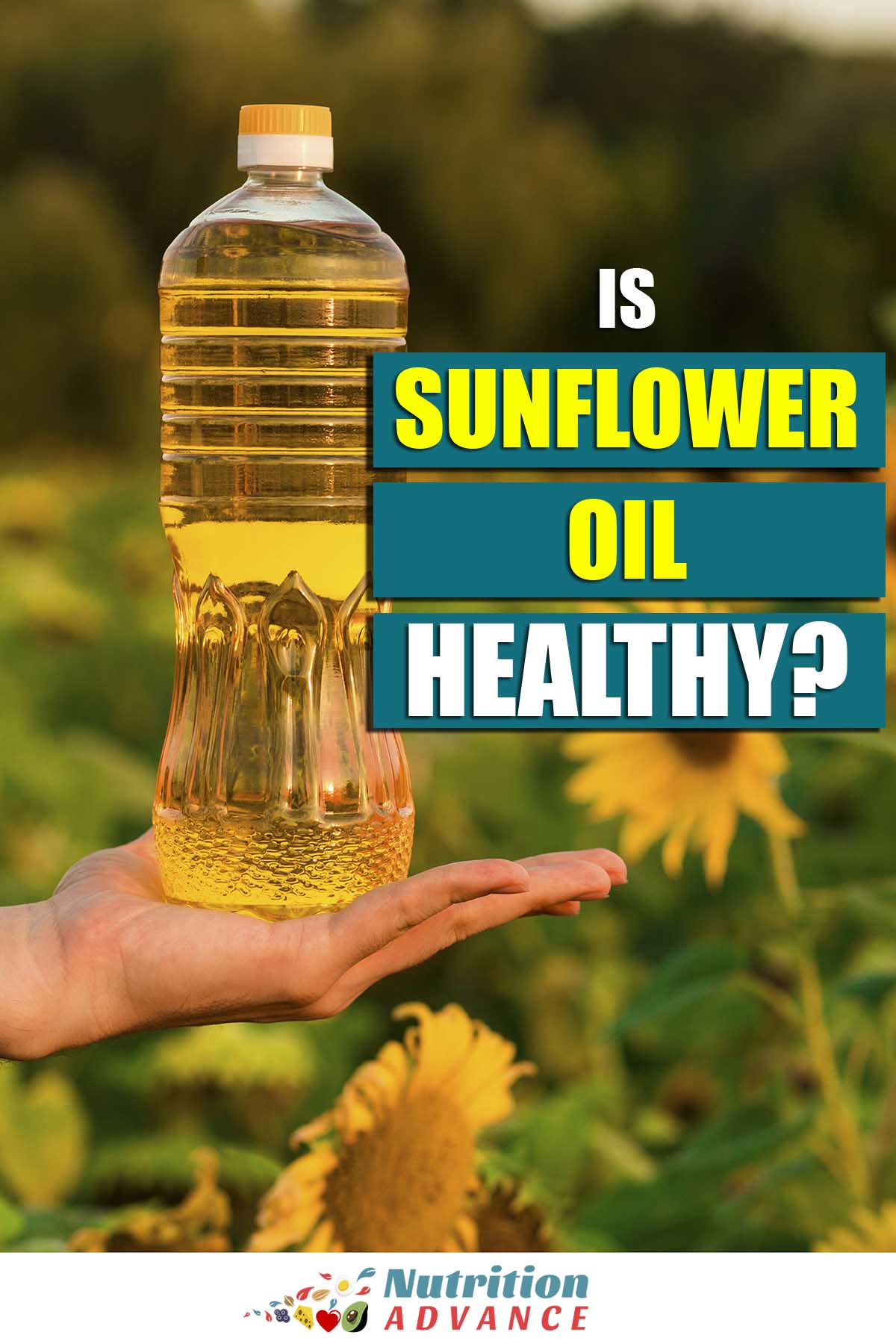 Sunflower oil is one of the most prevalent cooking oils in the world.

It is also easy to hear claims that sunflower oil is “heart-healthy” cooking oil, but is there truth to this?

This article provides an in-depth guide to sunflower oil and its nutritional and chemical properties.

What Is Sunflower Oil? 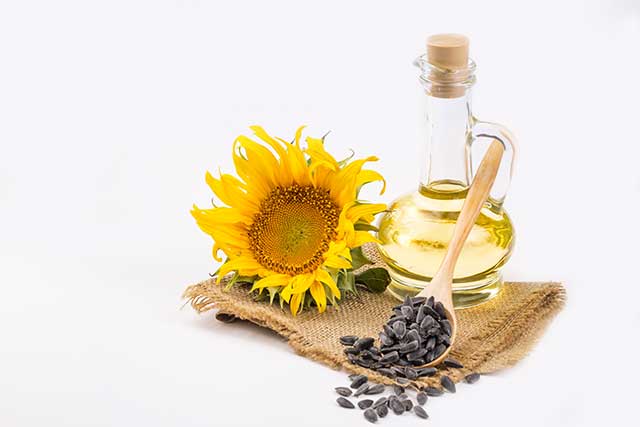 Sunflower oil is an edible oil made from the seeds of the sunflower plant (Helianthus annuus).

This oil is one of the most common vegetable oils, and global production hit 19.45 million metric tons in 2019 (1).

Since the oil is cheap, it is common to find sunflower oil in homes. The oil is often used for frying and sauteing.

The majority of commercial sunflower oil goes through a lengthy production process which involves refining, bleaching, and deodorization (2).

For this reason, the oil is also known as an RBD oil; a refined, bleached, and deodorized oil.

This production process involves following the steps below in order;

Before we discuss the oil’s relative health properties, here are the full nutritional values for an average serving of sunflower oil.

The source of the nutrition data is the USDA’s National Nutrient Database (3).

Key Point: As shown in the nutritional values, sunflower oil is a pure source of fat, and it contains significant amounts of omega-6.

Does It Have Any Benefits?

Like with any isolated source of fat, there is not a lot of nutritional value in sunflower oil.

However, the oil does contain a reasonable amount of vitamin E, which is a fat-soluble vitamin with antioxidant properties (4).

Generally speaking, most fats contain vitamin E as it helps to protect the fatty acids from oxidizing (5).

Aside from this vitamin E content, the oil is also widely available and affordable.

However, there are also some important concerns to consider regarding sunflower oil and the fatty acids it contains.

On the negative side, one of the biggest concerns surrounding sunflower oil is that it can generate polar compounds (oxidation products such as aldehydes) when heated.

An independent lab recently conducted an extensive study to test the oxidative stability of popular cooking oils. In this study, the researchers heated the various oils to different temperatures to see the effects this had on the oil (7).

Unfortunately, this study showed that sunflower oil produces large amounts of oxidation products, and particularly so during longer cooking times.

For example, tests showed that sunflower oil contains around 6% polar compounds in its raw state.

Sunflower Oil Versus Other Cooking Oils

The table below demonstrates how sunflower oil compared to various other cooking oils regarding oxidative stability and changes in polar compounds after cooking;

In summary, the data here show that (7);

Also, there is another recent study that compared the oxidative stability of sunflower oil to three other options;

Among these four oils, palm oil had the highest oxidative stability, and sunflower oil had the lowest (8).

Why Is Sunflower Oil Prone To Oxidation?

Three primary factors can influence the oxidative stability of a type of fat;

A single tablespoon of sunflower oil contains nearly nine grams of omega-6 and virtually no omega-3.

Omega-6 is one of two essential fatty acids that the human body requires to function. This fatty acid plays a crucial role in growth and development, wound healing, and more (12).

However, despite being essential, we only need small amounts of omega-6, and some researchers believe that excessive amounts could be harmful.

The reason for this is disagreed upon, however.

Some researchers believe that an imbalanced ratio of omega-6 to omega-3, which can be up to 20:1 in the modern diet, can put the body into a pro-inflammatory state. By comparison, the evolutionary ratio was approximately 1:1 (14).

In this regard, excessive amounts of omega-6 may impair the biological activity of omega-3.

Linoleic acid (the primary omega-6 fatty acid) can block the uptake of DHA and EPA (omega-3 from animal sources) into tissues. Additionally, linoleic acid also competes with alpha-linolenic acid (ALA) for absorption. ALA is an omega-3 precursor found in plant foods (15).

That said, this issue is still not fully understood, and contrasting evidence exists.

For instance, some studies show that high blood levels of linoleic acid (omega-6) do not increase markers of inflammation. However, this research only took absolute omega-6 status into account, and the omega-3 status of the participants was not clear (16, 17).

For those who wish to maintain a more balanced omega-6 to 3 ratio, sunflower oil is not an ideal choice.

High Oleic Sunflower Oil May Be a Healthier Option

For those who wish to use sunflower oil, it is worth noting that there is a different type available: high oleic sunflower oil.

‘High oleic’ means that the fat contains high amounts of oleic acid (at the expense of the polyunsaturated omega-6 content). This high oleic oil is made by the conventional breeding of sunflower plants to produce seeds that are rich in oleic acid.

Oleic acid is a monounsaturated fatty acid which we can also find in extra virgin olive oil (18, 19).

There are several benefits of high oleic sunflower oil compared to the regular version;

The table below shows how the fatty acid profiles of regular and high-oleic sunflower oil differ per tablespoon serving (3, 22);

As we can see, the high oleic version of the oil is much lower in omega-6.

Key Point: There is a high oleic version of sunflower oil which offers many benefits over the standard oil.

While the high oleic variety offers numerous improvements, it is probably better to stick to more proven cooking oils.

For a like-for-like alternative, extra virgin olive oil is one of the most evidence-backed oils.

Aside from this, other cooking oils that have excellent oxidative stability include animal fats and coconut oil.

For more articles on cooking fat, see this overview of the pros and cons of red palm oil.