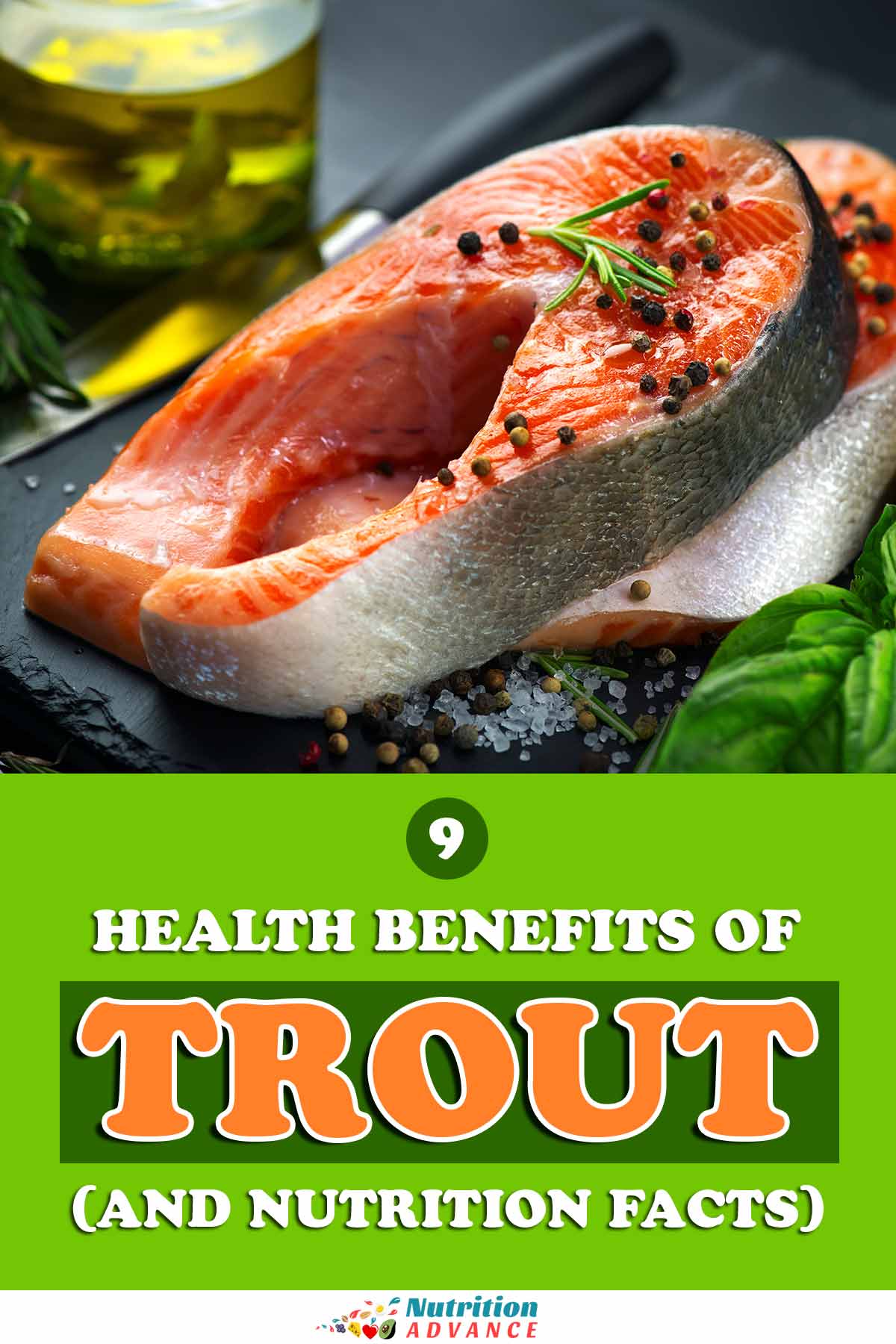 Rainbow trout is a delicious oily fish which is high in omega-3, full of essential nutrients, and it’s one of the “cleanest” fish.

A relative of the wider salmon family, rainbow trout is a freshwater fish and the most common species of trout.

This guide examines the nutrition profile and health benefits of trout. 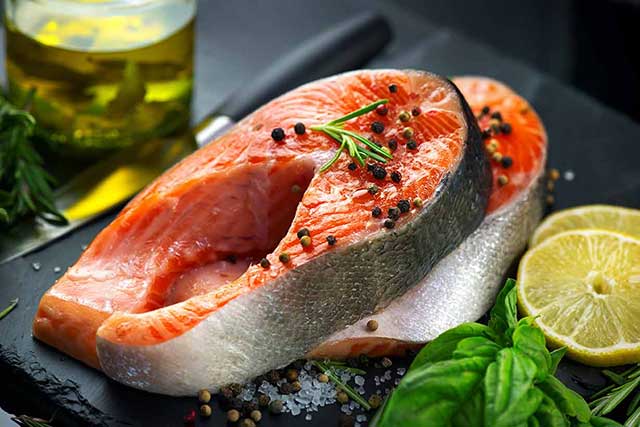 The following tables show the nutritional values for raw rainbow trout per 100 gram (3.5 oz) serving according to the USDA Food Composition Databases (1, 2).

Rainbow trout is fairly low in calories and it is a good source of protein and healthy fat.

Here is a look at the vitamin profile of trout showing the amount of the reference daily intake (RDI) for each nutrient.

The primary minerals in rainbow trout are phosphorus, selenium, and potassium.

Key Point: Rainbow trout is a good source of protein and healthy fat, and it provides a wide range of nutrients too.

Here is a look at some of the reasons why rainbow trout can be a healthy addition to our diet.

1) Contains Low Levels of Mercury and Other Contaminants 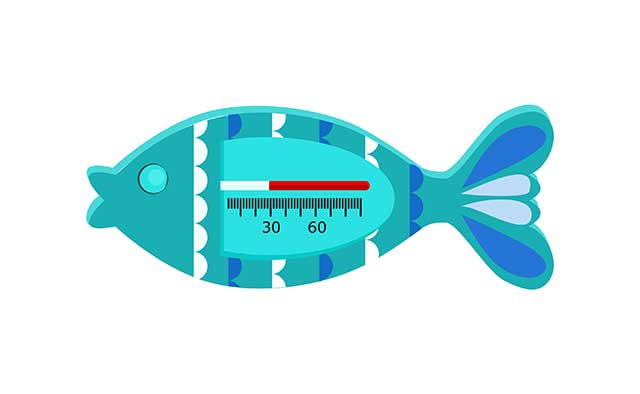 Rainbow trout is one of the healthiest fish and seafood choices for numerous reasons, but one of the most significant might be its low level of contaminants.

First of all, methylmercury contamination can be a problem with seafood. Coal power plants around the world emit somewhere between 5,000 and 5,500 tons of mercury per year (3).

Unfortunately, this mercury can spread thousands of miles throughout the atmosphere, and it eventually falls into the sea.

Research suggests that a high intake of seafood can increase the risk of developing mercury toxicity, a condition that can result in systemic damage to the human body, particularly to the nervous and neurological system (4, 5).

How Much Mercury Does Trout Contain?

Data recorded between 1991 and 2008 demonstrated that freshwater trout contained a mean mercury concentration of 0.071 PPM (6).

This data places trout among the fish with the lowest levels of mercury. As a comparison, shark has a mean mercury concentration of 0.979 PPM (6).

Studies also show that rainbow trout have low bioaccumulation of heavy metals and contaminants such as cadmium, lead, and organochlorines (7, 8).

Key Point: Rainbow trout is one of the cleanest fish, and it contains very low levels of contaminants.

Although rainbow trout is a leaner fish than species like salmon and tuna, it still offers a good amount of omega-3 fatty acids.

Since average omega-3 intake is low, most of us could probably benefit by increasing our intake of oily fish.

For instance, the typical Western diet has an average omega-6 to omega-3 intake of around 20:1 in recent times. Research suggests that this ratio was 1:1 throughout much of human evolution (9).

Furthermore, research findings from randomized controlled trials demonstrate that increasing our intake of oily fish may (10, 11, 12);

See this guide for a review of fish with the highest amounts of omega-3.

Key Point: Trout is a good source of omega-3, which may have several positive effects on our health.

3) Trout Is High In Protein

Protein from fish is also highly bioavailable, and it contains large concentrations of all the essential amino acids.

Interestingly, some research also suggests that fish protein may be more satiating than other protein sources (13, 14).

However, these studies were small in scale, and more extensive research is necessary to give the idea credence.

4) An Excellent Source of Vitamin B12

Red meat automatically comes to mind when most people hear vitamin B12.

However, fish is also a rich source of this vital nutrient, and rainbow trout contains a large concentration of the vitamin.

Vitamin B12 is a nutrient that plays an essential role in DNA and red blood cell production. It is also thought to play an important part in cognitive health (15).

Key Point: Trout is a rich source of vitamin B12. 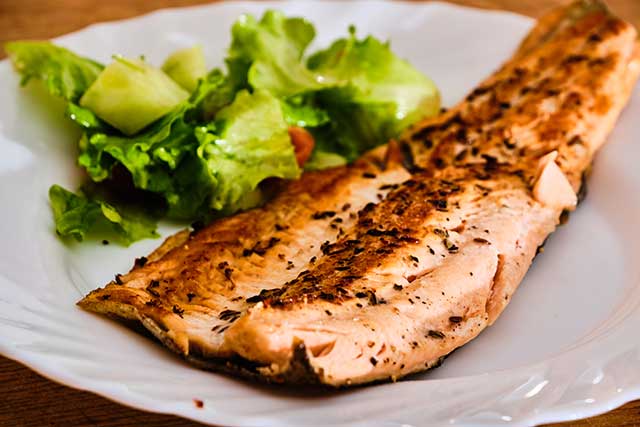 Sunlight is the best source of vitamin D, which is why you may hear it referred to by the name ‘the sunshine vitamin’.

However, dietary vitamin D can also be important, particularly for individuals not getting enough natural sunlight.

On this note, rainbow trout is one of the best dietary sources of the vitamin, and one fillet offers 635 IU, which is more than 100% of the RDI (1).

Among these, the vitamin helps to enhance immunity, regulate blood pressure, and strengthen bone health (16).

The most concentrated mineral found in rainbow trout is selenium.

Selenium helps to produce antioxidant enzymes that have health-protective effects in the body (17, 18).

These enzymes are otherwise known as selenoenzymes, and research suggests they help fight oxidative stress and reduce inflammation (19, 20).

A typical trout fillet offers 20 mcg of selenium, which is equivalent to 29% of the RDI (2).

Rainbow trout provides a good supply of potassium, with one fillet offering 765 mg, which is 22% of the RDI (2).

Potassium is a nutrient that most people are not getting in sufficient quantities.

Among its many functions, potassium plays a crucial role in regulating blood pressure alongside sodium.

As a result, diets that provide an insufficient amount of potassium can raise blood pressure levels (22, 23).

A dinner of trout fillet alongside some green vegetables (such as spinach) can significantly boost potassium intake.

Judging food by how much fat or carbohydrate it contains (or how many calories) is not an accurate measure of its respective health properties.

For this purpose, a nutrient-density score is a better way to judge how beneficial a particular food is.

Nutrient density refers to how many nutrients food offers compared to its relative energy (calorie) density.

For instance, sugar and soybean oil are two of the worst performing foods; they contain almost no nutrients yet significant numbers of calories.

On the other hand, rainbow trout is very nutrient-dense.

Despite being very low in calories, trout is an excellent source of protein, omega-3, selenium, potassium, phosphorus, vitamin D, vitamin B12, and many other nutrients in varying proportions.

Key Point: Trout performs well when it comes to nutrient density. This oily fish is high in nutrients, but low in calories.

Eating healthy food becomes much easier when the food tastes good, and trout doesn’t disappoint in this regard.

There are some definite similarities between trout and salmon, and while slightly different, both have a similar soft texture, pink color, and taste profile.

However, trout has a slightly milder taste.

While it is tasty on its own, trout works well with creamy condiments such as parsley or lemon sauce.

There are two excellent recipes for cooking trout with creamy lemon sauces here;

Key Point: Trout has a similar yet slightly milder taste to salmon. It is an enjoyable food to eat.

Trout doesn’t enjoy the popularity of its relatives in the salmon family.

However, nutritionally it certainly offers a lot.

For one thing, trout provides an excellent source of omega-3, protein, vitamins, and minerals.

Another great benefit of trout is that it is much cheaper than salmon.

Overall, this fish is a healthy, nutrient-dense, and affordable addition to any diet.

For more on oily fish, see this guide to sockeye salmon.