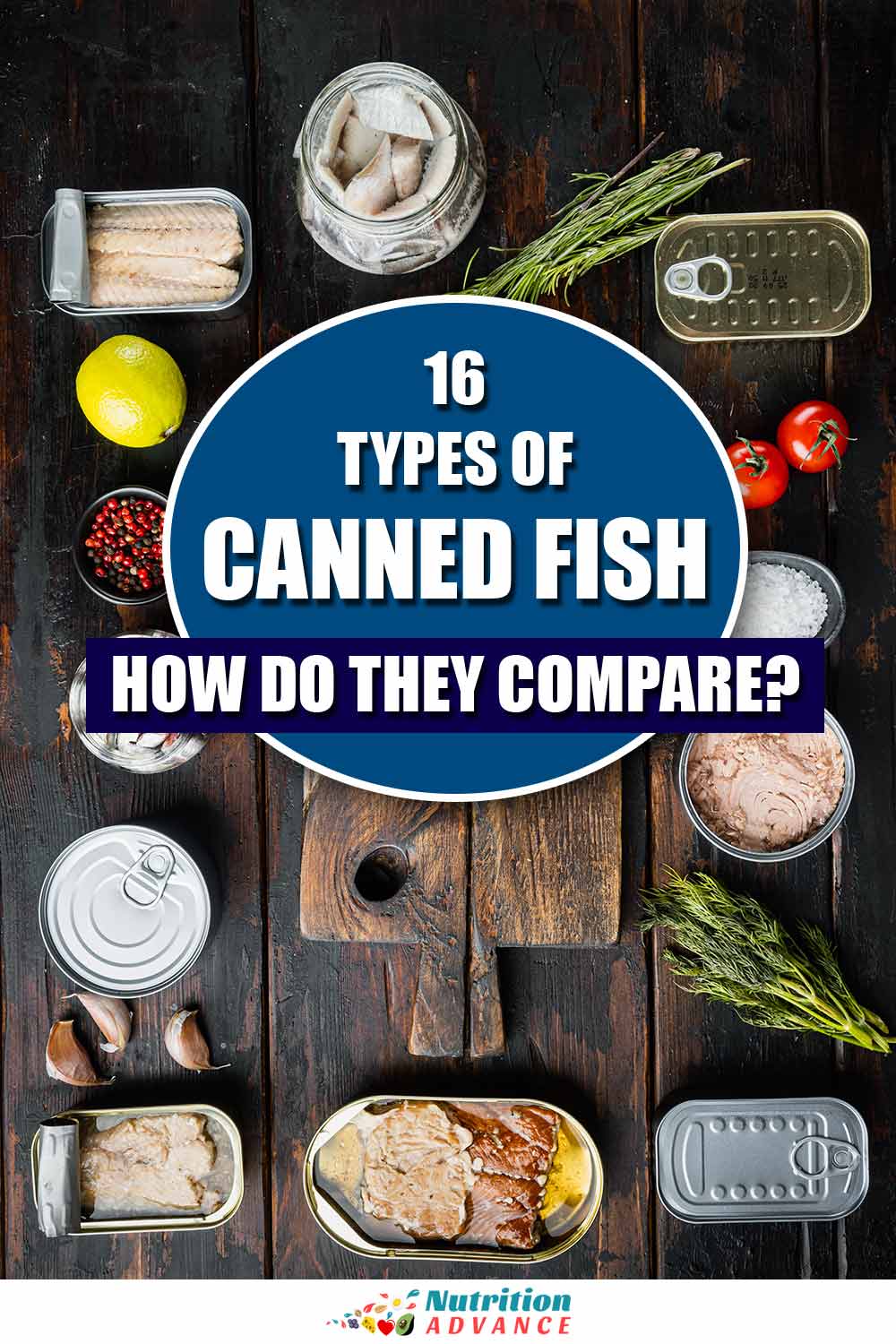 Most seafood provides a rich range of beneficial nutrients, but it can be relatively expensive.

However, canned fish is comparatively very affordable, just as nutritious, and very convenient.

Since mercury contamination is a typical concern with seafood, the mean mercury content of each fish will also be provided. The source of this mercury data is a twenty-two-year monitoring program of mercury levels in commercial fish by the US Food and Drug Administration (FDA) (2).

Recommended servings per week based on joint advice from the FDA and Environmental Protection Agency (EPA) are also provided (3).

For reference, the EPA considers one serving to be four ounces (113g).

This variety of tuna tends to be a good source of omega-3, but it also has one of the highest mercury contents among canned fish.

Additionally, it is more expensive than the cheaper varieties of tuna, such as skipjack.

According to the NCC nutrition database, here are the basic nutrition facts for canned albacore tuna per 5 oz can (129g drained) (1):

Based on 451 samples, canned albacore tuna had a mean mercury concentration of 0.350 parts per million (PPM) (2).

Advice from the FDA and the EPA recommends no more than one serving of canned albacore tuna per week (3).

Anchovies are one of the smallest varieties of commercial fish.

Although they look like sardines, they are from a different (Engraulidae) family of fish.

Canned anchovies are very versatile, and people can consume them in many different ways.

Among the most popular ways of consuming them, anchovies may be eaten alone, on toast, in pasta dishes, on pizza, for salads, and in stews.

According to the USDA’s FoodData Central database, a 2-oz (45g drained) can of anchovies provides (4):

From a total of 15 samples, canned anchovies had a mean mercury concentration of 0.016 parts per million (PPM) (2).

Due to their low mercury content, the EPA’s recommendations allow three servings per week of canned anchovies (3).

Crab is one of the most popular shellfish, but it can be pretty expensive.

On the positive side, canned crab meat is much more affordable and contains the same nutrients.

Based on USDA FoodData Central database data, one 6.5 oz (125g drained) can of crab meat supplies (5).

Based on the mercury content of crab, the EPA recommendations allow for three weekly servings (3).

Herring is a common and popular form of oily fish.

However, the canned form tends to be more widely available than fresh herring.

Once again, herring from a can is just as nutritious as the fresh fish.

According to the NCC nutrition database, a 136-gram can of herring offers (1):

The FDA’s mercury monitoring program found that, from 27 samples of herring, the mean mercury concentration was 0.078 PPM (2).

Since it contains so little mercury, the EPA recommendations allow three weekly servings of canned herring (3).

The only difference between herring and kippers is that the latter are smoked herring made traditionally.

As a result, kippers share many of the same nutritional traits as herring, aside from having a slightly higher salt content.

According to the NCC nutrition database, a 136-gram can of kippers has the same values as canned herring (1):

Since kippers are smoked herring, the mean mercury concentration is the same as herring at 0.078 PPM (2).

EPA recommendations allow for three weekly servings of herring, so the same will be valid for kippers (3).

Mackerel belongs to the same family of fish (Clupeidae) as sardines and herring (6).

Like those other fish, and as an oily fish, canned mackerel is a significant source of omega-3.

While mackerel isn’t among the most expensive seafood varieties, canned mackerel is even cheaper and more widely available, making it convenient.

According to EPA-FDA fish advice, it is OK to consume three weekly servings of canned Atlantic mackerel (3).

Mussels are among the most nutrient-dense of all foods, and they provide a wealth of vitamins and minerals.

However, finding fresh mussels can sometimes be challenging (and they are much more expensive).

Canned mussels are generally easy to find, and they are a more widely-available form of this popular shellfish.

According to the USDA FoodData Central database, a 122-gram can of mussels provides (8):

The FDA and EPA data does not have a listing for the mercury content of mussels.

However, all types of mussels are very low in mercury (9).

As a fellow member of the mollusk family of shellfish, oysters are similar to mussels nutritionally.

However, oysters are arguably even more nutritious.

According to the USDA’s FoodData Central database, a 3-oz (85g) can of oysters provides (10).

According to EPA-FDA fish advice, it is fine to eat three weekly servings of canned oysters (3).

Pink salmon is a small species of salmon that lives in the Pacific ocean (11).

This fish has a mild flavor, is rich in omega-3, and contains low amounts of mercury.

According to the USDA’s FoodData Central listing for canned pink salmon, a 3-oz (85g) serving provides (12):

Based on the joint EPA/FDA recommendations, it is OK to consume three weekly servings of canned pink salmon (3).

Canned fish going by the name ‘red salmon’ is a species of salmon called sockeye.

As the ‘red salmon’ name implies, sockeye salmon has a deep red-colored flesh.

The FDA data on mercury concentrations counts both red and pink salmon under ‘canned salmon.’

Thus, red and pink salmon have the same mean mercury concentration of 0.014 PPM (2).

Based on the guidance from the EPA and FDA, it is possible to consume three weekly servings of canned red salmon (3).

Canned sardines are arguably the cheapest canned fish, and they are one of the most nutritious too.

Despite being small in size, sardines pack a lot of nutritional value.

The nutritional values for one can (drained weight: 84g) of sardines are provided as follows by the NCC nutrition database (1):

Based on 90 different samples, sardines had a mean mercury concentration of 0.013 PPM (2).

According to the EPA guidance, sardines are among the ‘best choice’ category and can be consumed three times per week (3).

This variety is darker than albacore tuna, with a light pink shade and a stronger fishy taste.

Canned skipjack tuna is an excellent source of protein, but it does not contain as much omega-3 as albacore.

According to data from the USDA’s FoodData Central database, here are the nutritional values for a 142-gram can of skipjack tuna (13):

Skipjack tuna does not contain as much mercury as albacore tuna, but it does have slightly more than most other types of canned fish.

Based on the EPA/FDA advice, it is possible to consume three weekly servings of canned skipjack tuna (3).

Squid belongs to the mollusks group of shellfish.

While it can be harder to find in canned form than some of the other options in this guide, it is available.

Canned squid is a rich source of protein, and it does not contain much fat.

Trout is an oily fish that shares some characteristics with salmon, and it has the same orange-to-red hue.

As an oily fish, it is a rich source of omega-3. On the positive side, it also contains relatively low amounts of mercury.

The USDA’s FoodData Central database provides the nutritional values per 100 grams of canned trout as follows (15):

Trout has a reasonably low mercury content. From 35 samples, the mean mercury concentration was 0.071 PPM (2).

Canned trout is another canned fish that passes the ‘three weekly servings’ guidance from the EPA and FDA (3).

Yellowfin tuna looks similar to skipjack tuna. The two are also similar in the way that neither has a high fat content.

Although they do share some characteristics, canned yellowfin tuna has a slightly milder taste than skipjack.

According to the USDA’s FoodData Central database, canned yellowfin tuna should provide the following nutrients per 3 oz (85g) serving (16).

As a slightly larger fish, yellowfin tuna contains more mercury than both skipjack and albacore tuna.

For this level of mercury content, the EPA advises no more than one weekly serving of yellowfin tuna (3).

As shown in this guide, there are all different kinds of canned fish, and most of them are very nutritious and low in mercury.

While some options are slightly higher in mercury, consuming these at the recommended levels is still OK.

Seafood is a beneficial food group to consume, and canned fish helps more people do this through its affordability and convenience.