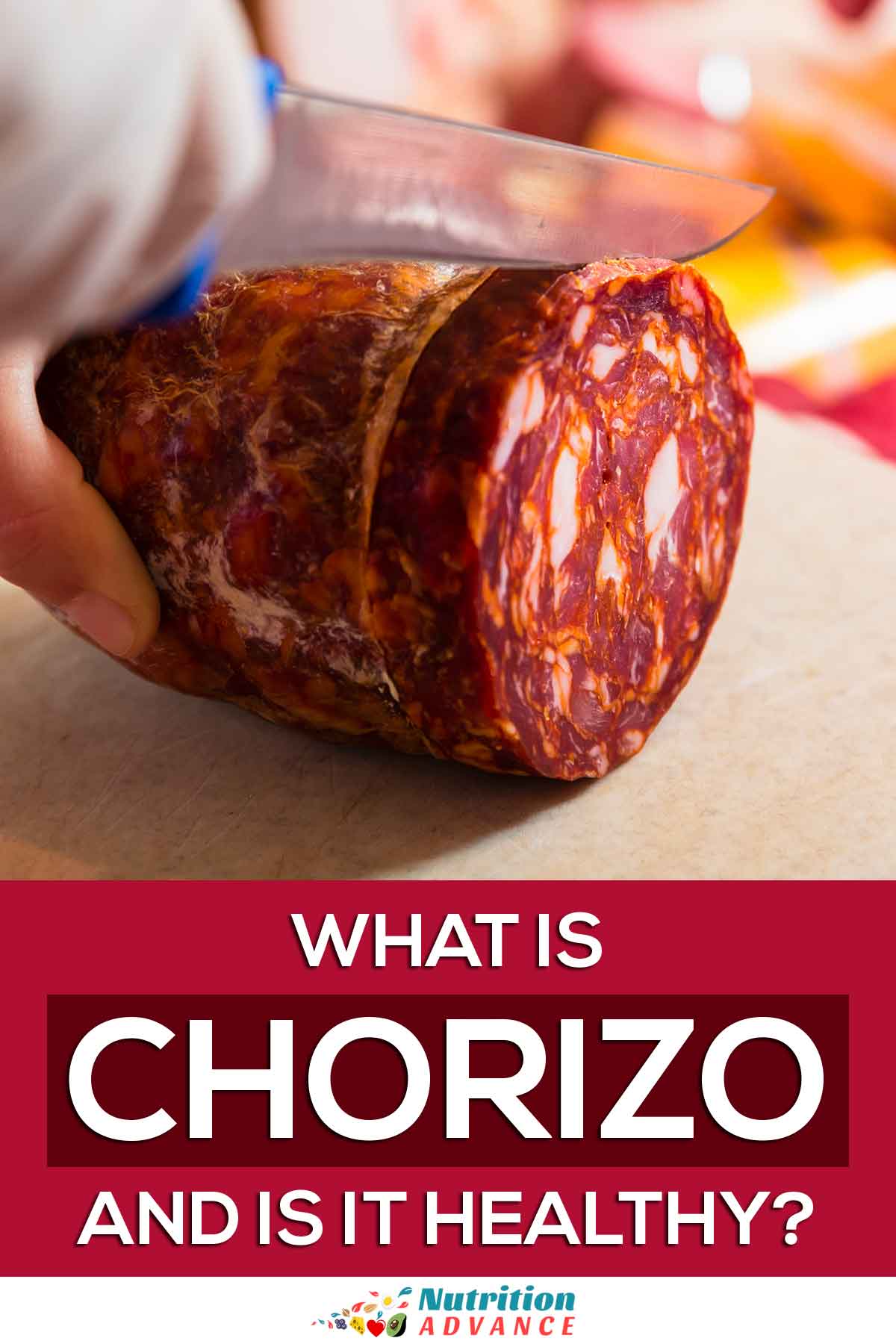 Chorizo is a thick and spicy pork sausage with origins believed to go back to Roman times.

This article describes what chorizo is, how producers make it, how to use it, and the potential benefits (and drawbacks) it offers.

As a type of cured meat, is chorizo a healthy choice? 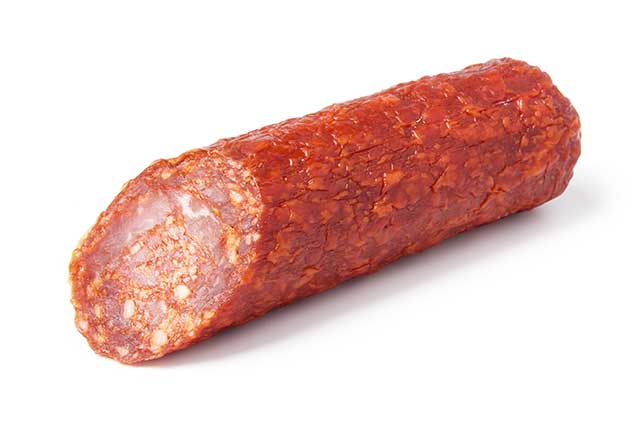 Founded in the Iberian peninsula, Spain, chorizo is a fermented, cured, and smoked sausage.

Generally speaking, chorizo refers to a spicy pork sausage with a red-colored appearance.

However, there are hundreds of different chorizo recipes, and the exact ingredients differ from region to region.

There are also two distinctly different types of chorizo: Spanish and Mexican.

While Spanish chorizo is a cured and fermented product consumed raw, Mexican chorizo is a fresh sausage that needs cooking.

In this article, we will discuss the properties of the traditional Spanish chorizo.

As mentioned, there is a wide range of different chorizo varieties, but they generally include the same base ingredients.

Here is a list of the ingredients that typical Spanish chorizo will include;

Among these ingredients, the paprika is responsible for the iconic red color of chorizo.

Nitrates and nitrites may also be used as a preservative, although this will depend on the specific brand.

Depending on the specific region, other ingredients may include herbs such as oregano and cumin

We can also classify chorizo as either ‘picante’ (spicy) or ‘dulce’ (sweet) depending on the variety of pimenton used in the recipe.

Pimenton can come from several different peppers. Some varieties are hot and spicy, and others are mild and slightly sweet.

Additionally, different regional recipes may use varying amounts of lean meat and fat. As a result, some chorizos are hard, and some are soft.

Furthermore, the shape can differ from region to region; some chorizo sausages are long and thin, and others are short and thick.

Key Point: Chorizo is a type of cured pork sausage and it comes in a wide range of different varieties. The key ingredients are pork, pork fat, salt, and paprika.

How Is Chorizo Made?

The process of making chorizo is quite straightforward, but it takes time and patience.

According to Sabor Artesano, a traditional producer of the fermented sausage, the production process follows these steps;

The process is very similar to other fermented sausage products such as salami and capocollo.

In the tables below, you can see the full nutritional values for chorizo per 100 grams.

The source of the nutrition data is the reliable NCC Food and Nutrient Database.

As shown in the table, chorizo is a high-calorie food that offers large amounts of fat and protein.

Does Chorizo Have Any Health Benefits? 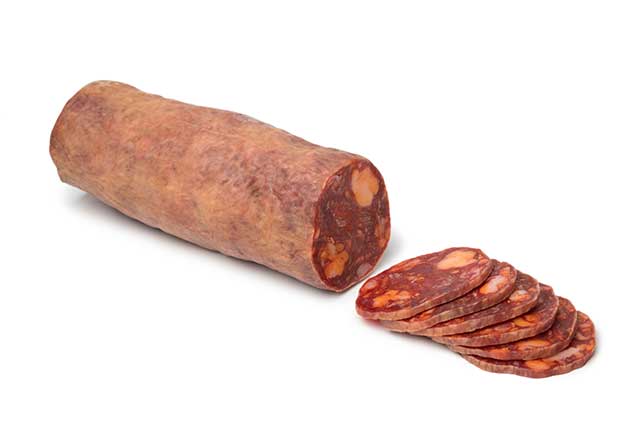 While not often mentioned in conversations about healthy foods, chorizo does offer several benefits.

Since the main ingredient is pork, the sausage offers the same beneficial nutrients as found in the fresh meat.

1) A Good Source of B Vitamins

Chorizo provides a good source of B vitamins, and it is particularly high in vitamin B1 and vitamin B12.

B vitamins play a crucial role in energy production, and they help to produce energy from the food we eat (1).

As shown in the nutrition facts section, chorizo supplies more than 24 grams of protein per 100 grams.

Furthermore, the source of the protein—pork—is a ‘high quality’ protein since it contains sufficient quantities of each essential amino acid (2).

Additionally, meat products, such as chorizo, tend to offer the most bioavailable quantities of amino acids (3).

Aside from sodium (in chorizo’s case), the most concentrated mineral in pork products is selenium.

Selenium is an important mineral that activates various selenoenzymes and selenoproteins in the body (4, 5).

In addition to other various roles, these selenium-activated compounds play an essential part in the immune system. It is thought that they can help to fight oxidative stress (6, 7).

Perhaps surprisingly, chorizo is a source of probiotics in the form of lactobacillus bacteria (8, 9).

Probiotics like lactobacillus are thought to improve gastrointestinal health and, potentially, reduce the risk of obesity and disease (10, 11).

There are also some common concerns surrounding chorizo, and these are primarily related to the ingredients used to cure/preserve the sausage.

1) Chorizo Is Extremely High In Salt

Recent research has shown that salt is not as much of a danger to our health as once thought.

For instance, recent systematic reviews show that, for the average person, increasing potassium intake is more important for cardiovascular health than sodium restriction. Also, some research suggests that moderate salt intake might be the most beneficial (12, 13).

That being said, sodium affects us all in different ways, and some people are more sensitive to high salt intake than others.

On this note, data demonstrates that high sodium intake amongst certain groups can dramatically raise blood pressure. These people are known as ‘salt sensitive’ (14, 15).

Therefore, chorizo may not be suitable for these salt-sensitive individuals.

With 1235 mg sodium per 100 grams, which is equal to more than three grams of salt, chorizo is a significant source of sodium.

Key Point: Chorizo contains substantial amounts of salt, which could be a negative issue for some individuals.

2) Chorizo May Contain Nitrites and Nitrates

Another potential concern that some people have about chorizo involves its (potential) use of nitrites and nitrates. Firstly, these compounds are preservatives that help to protect foods against harmful bacterial growth (16).

According to the World Health Organization, nitrates and nitrites are potentially carcinogenic (cancer-causing) compounds. This is because they can form nitrosamines, which animal studies suggest to be carcinogenic (17).

A meta-analysis of epidemiological studies also shows that dietary nitrate, nitrite and nitrosamine intake is linked with the risk of gastric cancer (18).

However, not all researchers agree. Some believe that nitrates and nitrites in food may even have positive effects. For instance, these compounds can also stimulate the release of nitric oxide, which can lower blood pressure (19, 20).

Further study is necessary within this area to gain a greater understanding of the biological activities of nitrates and nitrites. However, for those with concern over these compounds, it is possible to find nitrate and nitrite-free chorizo for sale.

Key Point: It is a disputed topic, but some researchers believe that nitrates and nitrites used in processed meats increase the risk of gastric cancer. Some chorizo products contain these compounds, and some do not.

How To Use Chorizo

If we buy some chorizo, then what can we do with it?

In truth, chorizo is a versatile ingredient, and there are many different ways in which we can use it.

For instance, combining chorizo with several kinds of cheese, fruit, and nuts provides a range of tasty flavors.

A little wine goes very nicely with this combination too, for those that enjoy the occasional drink.

This omelet is another straightforward chorizo recipe.

Make a cheese and onion omelet however you like it, and add some 0.5 cm slices of chorizo sausage into it.

For more recipe ideas, there is something for everyone in this ’37 different ways to use chorizo’ article.

Chorizo is a tasty cured sausage, and it is available in a wide range of varieties to suit different tastes.

Although not known for its health benefits, chorizo also provides a good amount of several essential nutrients.

People have been making this cured sausage for hundreds of years, and it remains popular today.

There is a good reason for that; it tastes delicious.

To read more on different cured meats, see this article about prosciutto.