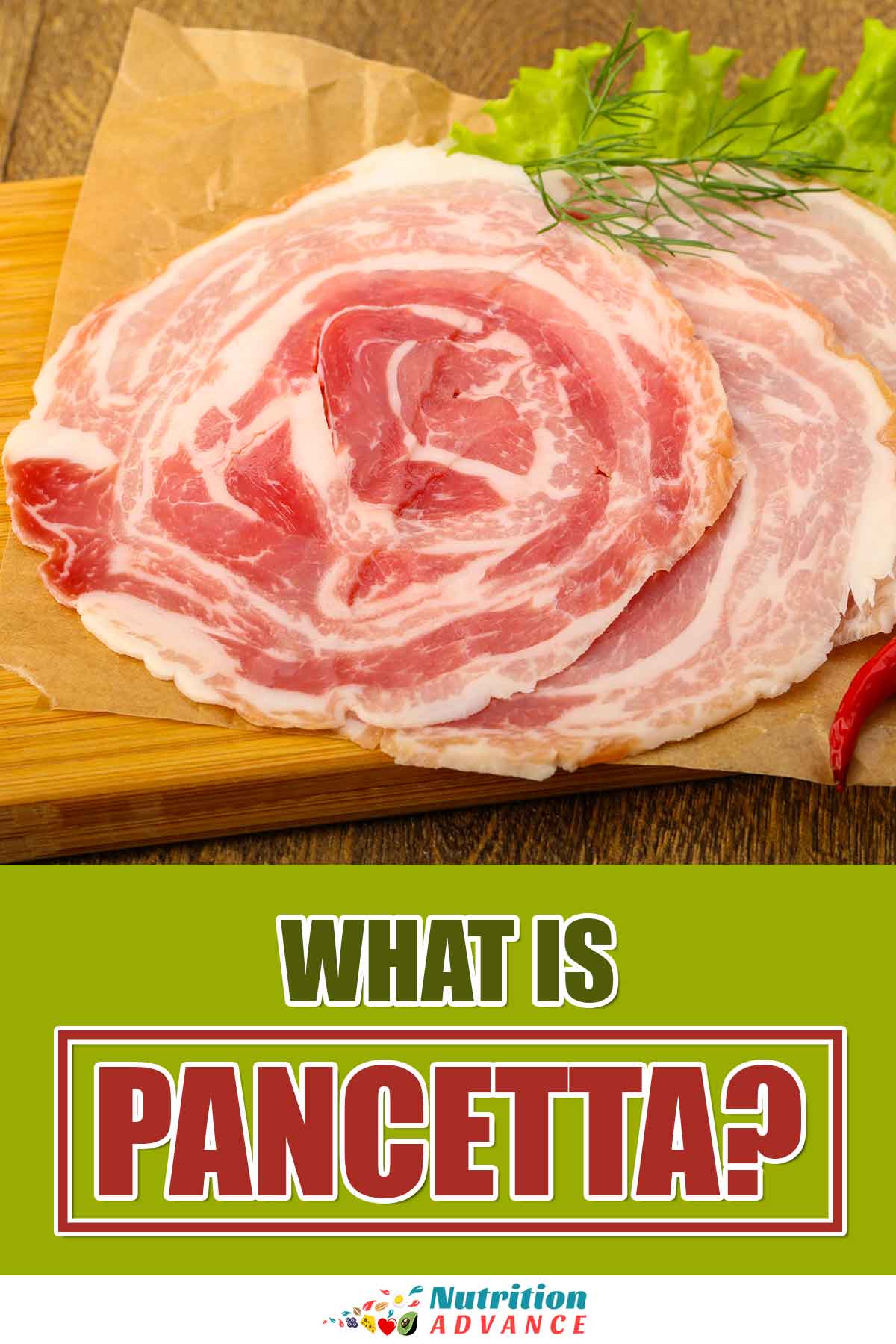 Pancetta is an Italian variety of cured meat that is popular around the world.

This article looks at precisely what pancetta is, how it’s made, its nutritional values, and how to use it. 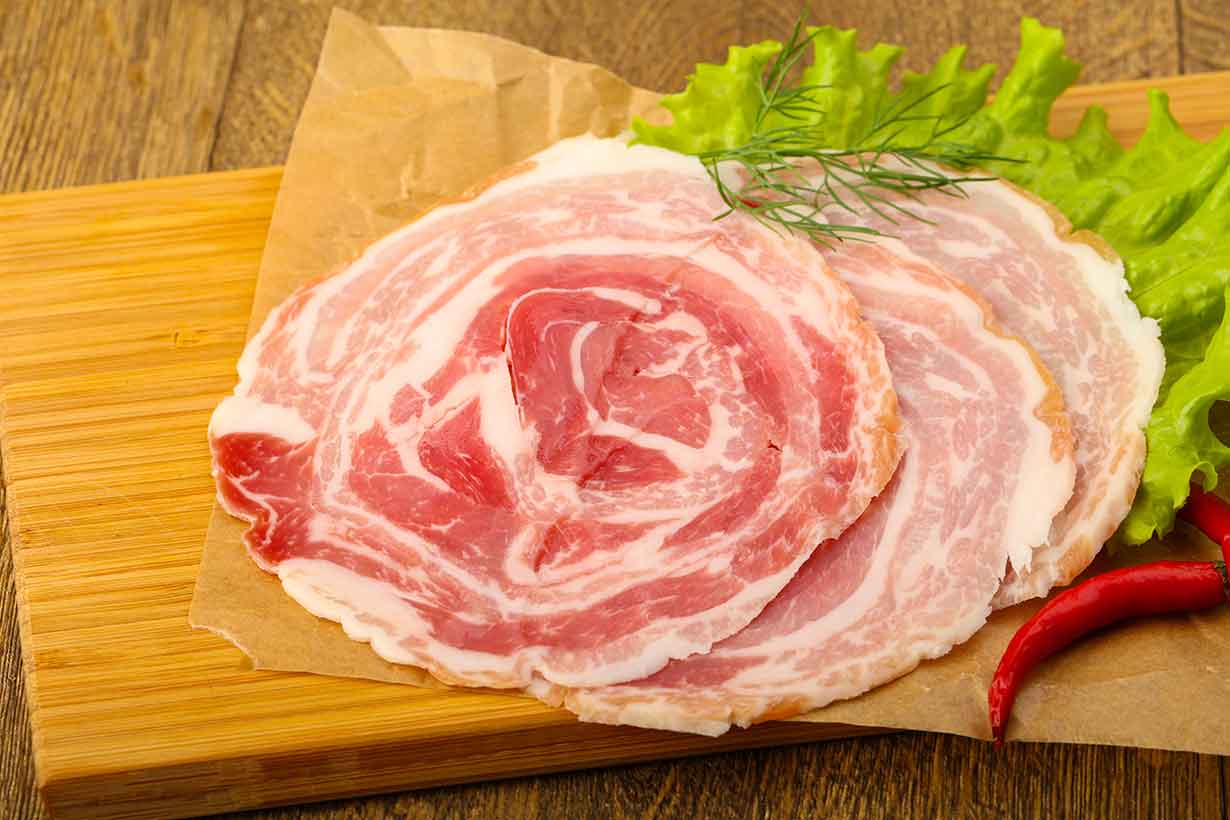 Pancetta is a type of cured meat made from pork belly.

While pancetta has an appearance similar to bacon, the two are relatively different.

Firstly, bacon is cured in salt and often smoked, but it is never dried, and it is still raw meat that always needs to be cooked.

Although some types of pancetta need to be cooked in the same way as bacon, others are both salt-cured and thoroughly dried. For this reason, they can be consumed raw.

There are many different varieties of pancetta, but the meat is most commonly sold in slices or small diced cubes.

Pancetta can either be eaten alone or added to various dishes as a taste-enhancing ingredient.

Since pancetta and bacon are both processed versions of pork belly, their taste is quite similar. However, pancetta isn’t usually smoked, and it doesn’t have the standout ‘smoky’ taste of bacon.

That said, some versions of pancetta go through a cold-smoking process to give them added flavor notes.

The flavor of pancetta also tends to vary depending on the different herbs and spices that producers may use in the curing brine.

Alongside other pork belly-based cured meats such as ‘nduja, pancetta is one of the fattiest cured meat varieties. This higher fat content also gives it a tender texture.

Pancetta always features pork belly and salt, which are the two main ingredients. Additional ingredients may vary from product to product.

It is not uncommon to find the following ingredients in different varieties:

Key Point: Pancetta is a popular cured pork product from Italy. It has a similar taste to bacon, but there are several key differences between the two.

How Is Pancetta Made?

The exact production process of pancetta largely depends on the specific variety, and each will slightly differ.

Generally speaking, these are the common production steps:

For guidance on making pancetta at home, there is a great guide here from Our Daily Brine.

Here are some of the most popular types of pancetta that we can find. 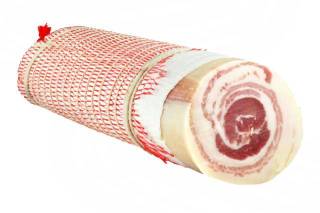 Arrotolata has been rolled into a cylinder shape, cured, and fully dried. As a result, people enjoy this form of pancetta raw. 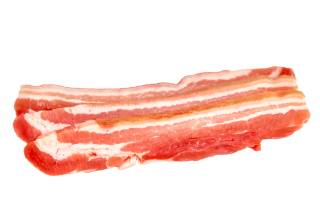 Affumicata undergoes a salt-curing and smoking process before being prepared into slices. This similar process makes it the closest thing to the Italian version of bacon.

However, the taste slightly differs as affumicata also uses a variety of herbs and spices as seasonings.

As pancetta affumicata has not undergone a drying process, it needs cooking.

Coppata is produced by combining pancetta with coppa (pork neck) and then rolling the two together.

This variety can be consumed raw (1). 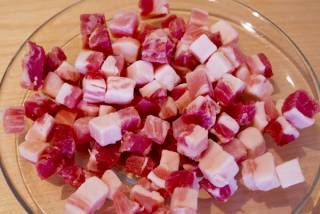 Pancetta tesa is similar to arrotolata in that it is both cured and dried.

However, this variety is cut into flat slices rather than being rolled.

Key Point: There are several different forms of pancetta; some can be served raw but others need to be cooked.

Using data from the USDA FoodData Central database, here is the basic nutritional profile for a pancetta product by a brand called Daniele International (2).

Since pancetta is made from pork belly, it offers a good amount of dietary protein.

Furthermore, it is a rich source of B vitamins and minerals such as phosphorus and selenium (3).

On the negative side, there are also some potential drawbacks to pancetta.

The first of these is the high sodium content; pancetta contains approximately 1643 mg of sodium per 100 grams. This is roughly 70% of the 2300 mg daily sodium limit recommended by the Dietary Guidelines for Americans (2, 4).

Even a moderate 50-gram serving of pancetta would represent around 35% of this recommended figure.

While sodium is an essential electrolyte mineral with important functions, excessive intake can potentially lead to increases in blood pressure.

Since sodium and potassium work together to regulate blood pressure, high sodium intake may be particularly problematic for individuals not consuming enough dietary potassium (8, 9, 10).

Additionally, very high sodium intakes can have a significant impact on the blood pressure of individuals with salt-sensitivity hypertension (11, 12, 13).

The use of preservatives in cured meats such as pancetta is vital to prevent the emergence of foodborne pathogens. However, these preservatives can potentially lead to the generation of nitrosamines (14).

Nitrosamines are organic compounds that form from nitrites reacting with secondary amines (15).

Nitrites can be found (or formed) from preservatives such as sodium nitrate and sodium nitrite, while amines are present in sources of protein like meat.

The nitrosamine-forming reaction is more likely to occur in the presence of high temperatures. For example, in one particular study, frying bacon at either 171°C or 210°C led to the formation of nitrosamines, but microwave cooking did not (16).

Nitrosamines can potentially lead to carcinogenic activity in the body. Some researchers believe this may explain the association between processed meat intake and colorectal cancer risk in population-based observational studies (16, 17, 18).

However, it is worth noting that nitrates and nitrites can also have potential benefits due to their ability to provide the body with nitric oxide (19, 20).

Key Point: The high sodium content and the preservatives that pancetta may contain are two potential health concerns.

How To Use Pancetta

There are many different ways to use pancetta, but here are some of the most common ideas:

These are just a handful of ideas. For more ideas on how to use this cured meat, there is a wide variety of recipes available here.

Where To Buy Pancetta

The best place to find the most authentic, traditional pancetta would be an Italian butcher or deli if there are any local options.

Additionally, it should be possible to find cheaper, ready-packaged pancetta in larger grocery stores. In most cases, this will be the sliced and diced pancetta rather than the more expensive rolled variety.

Although fresh pork belly is probably a healthier choice, pancetta is a traditional cured meat that offers a lot in the taste department.

This Italian cured meat is a popular ingredient in platters and dishes around the world due to its delicious flavor.

When used in moderation, there is no reason why pancetta can’t fit into a healthy dietary pattern.

What Is Jamón? A Complete Guide To the Spanish Ham

What Is ‘Nduja? The Spicy and Spreadable Salami