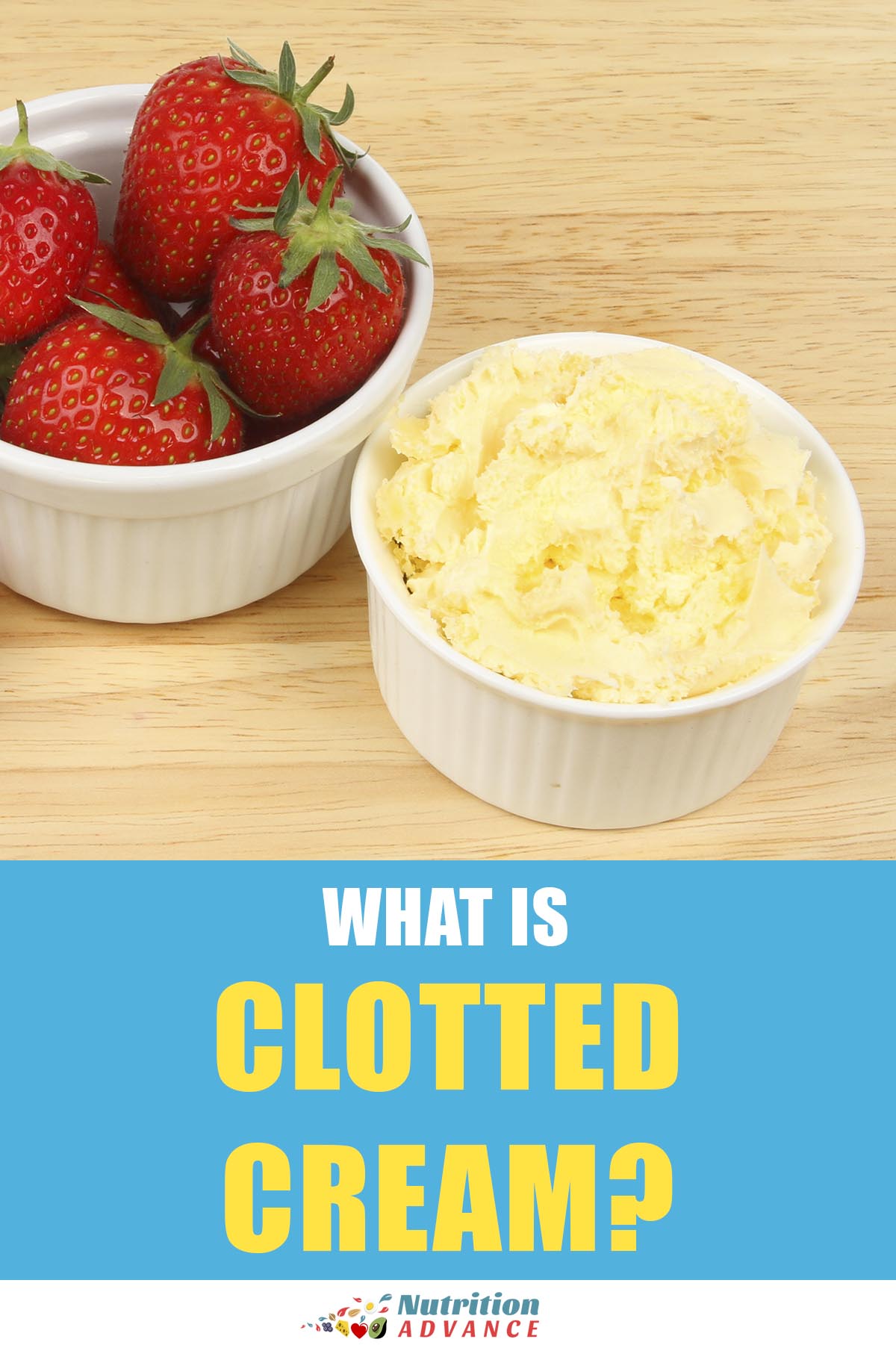 Clotted cream is a popular dairy food from England with a thick texture and a delicious taste.

With a high fat content, clotted cream is incredibly rich, and it comes somewhere in between heavy cream and pure butterfat.

Traditionally served alongside English tea and scones, this dairy product has a history going back hundreds of years.

But what exactly is clotted cream?

In this article, we examine its nutrition profile, how its made, and how to use it.

What Is Clotted Cream? 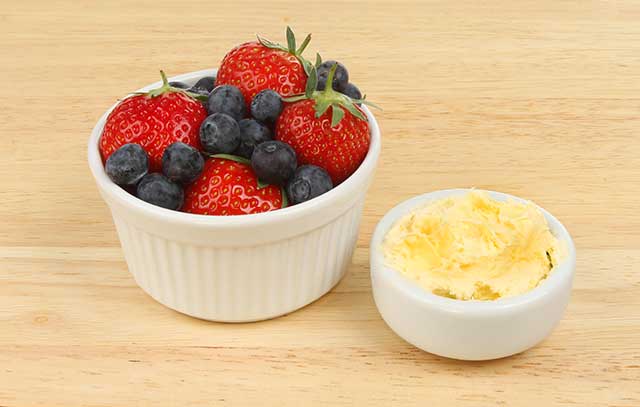 Clotted cream is a type of English cream that contains a much higher butterfat concentration than typical heavy cream.

Unlike regular cream, it does not have a liquid consistency, and it is thick and spreadable in a similar way to cream cheese.

The cream is thought to originate from either Cornwall or Devon in the United Kingdom, and it is also known as either ‘Cornish cream’ or ‘Devonshire cream.’

Since 1998, Cornish clotted cream has held an EU Protected Designation of Origin (PDO) within the European Union.

This PDO means that no product can be called ‘Cornish clotted cream’ unless it meets the following criteria (1);

While the butterfat content has to be a minimum of 55%, clotted cream typically exceeds this, and it will vary from brand to brand.

Some speculation suggests that clotted cream was first made by monks in the 11th century (2).

However, the first recorded mention of the cream comes from the desserts section of a traditional recipe book published in 1658 called ‘The Compleat Cook’ – not a spelling mistake! (3).

Producers use pasture-raised fresh milk to make clotted cream, and the grass in these regions is notoriously high in beta-carotene (1).

For this reason, clotted cream has a trademark creamy yellow color, as you may have noticed in the above image.

The taste is something like a regular cream, although it has a richer flavor.

Due to the texture, you cannot pour clotted cream like you can with other creams and can either eat it spread on food (or with a spoon).

In short; it is very rich, thick, and delicious.

Key Point: Clotted cream is a tasty traditional English cream that is very high in fat.

Based on the USDA’s record for ‘English Luxury Clotted Cream,’ here are the full nutritional values for clotted cream.

In the table below you can find the calorie and macronutrient content per ounce (28-gram) serving and per 100 grams (4);

As shown, the cream is very high in fat, it offers minimal amounts of carbohydrate, and contains no protein. 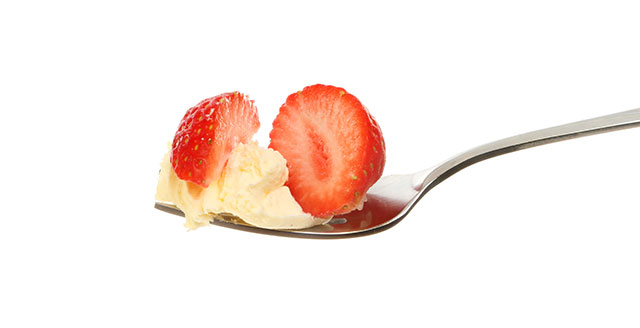 As an (almost) isolated source of fat, clotted cream is not particularly rich in nutrients.

However, it does contain a fair amount of vitamin A.

1) Very High In Vitamin A

Clotted cream provides a good amount of retinol, which is the type of vitamin A found in animal foods.

Retinol is often called ‘pre-formed vitamin A,’ and it is several times more bioavailable than vitamin A carotenoids found in plant foods (5).

Vitamin A helps to strengthen immune response, and it also provides benefits for our vision (6).

Key Point: Clotted cream provides more than one third of the RDI for vitamin A per serving.

2) A Rich Source of Dairy Fat

The days of fearing all dietary fats are over, and research has shown that high-fat dairy products are probably beneficial/neutral for health.

For instance, some recent controlled trials and systematic reviews on dairy fat have demonstrated that;

While butter may raise LDL levels in some individuals, cream does not have this effect due to the milk fat globule membrane (MFGM).

MFGM is a kind of structure that surrounds lipids (fats) in milk and helps to regulate postprandial (post-meal) cholesterol, inflammation, and insulin response (8, 9).

Furthermore, the fats in clotted cream may help to increase the absorption of fat-soluble vitamins A, D, E, and K.

Note: for sources of dairy fat that are also high in protein, Greek yogurt is worth a look.

Key Point: Clotted cream is full of dairy fats, but recent research suggests that these fats are neutral or potentially beneficial for health.

Here are a couple of concerns about clotted cream related to the nutrient profile and texture.

Nutritionally, there is nothing particularly “bad” about clotted cream. However, it is worth noting just how rich in calories the cream is.

As always, the caloric content of a food has no bearing on how healthy (or not) it is.

That said, with over 500 calories per 100 grams, it can add a significant contribution of extra energy/calories into our diets if we don’t measure our serving carefully.

Generally speaking, a serving should be around one ounce (28 grams).

If consuming clotted cream in large concentrations, it is better to use it as an occasional treat.

Key Point: Clotted cream is extremely high in calories, so it is easy to over-consume – especially when it tastes so good.

I love the texture of clotted cream; it’s thick, creamy, and delicious.

However, depending on what you want to use the cream for, clotted cream might not be suitable due to its thickness.

In other words; this is all fine as long as you don’t expect clotted cream to behave in the same way as regular (liquid) cream.

Key Point: Clotted cream is very thick and does not have a liquid consistency. Therefore, it is not as versatile as regular cream.

How Is Clotted Cream Made?

The process of making clotted cream is quite straightforward, and it doesn’t rely on any advanced techniques or equipment.

The production process of clotted cream follows these steps;

It is thought that this process of ‘clotting’ cream was first undertaken as a way of preserving fresh cream for longer periods.

Key Point: Clotted cream has a very traditional preparation method, and it doesn’t require any kind of advanced technology.

To make genuine 55% butterfat clotted cream, it would require a lot of milk and a lot of time and effort to separate all the cream.

However, for anyone who wants to have an attempt at making clotted cream at home, it is possible to make something similar.

You can make your own clotted cream providing you have some cream with a high concentration of butterfat.

For instance, in the United States, heavy whipping cream (36% butterfat) or preferably manufacturer’s cream (40% butterfat) would be ideal.

In the United Kingdom, double cream (48% butterfat) would be ideal.

The terminology of high-butterfat cream will vary by country, but basically, anything around 40% butterfat or higher would be best.

Also, using non-ultra-pasteurized cream will provide a better taste experience. In short; the better quality cream you use, the better the taste will be.

To make clotted cream, stick to the following simple steps;

Key Point: It is simple to make a clotted cream-alike recipe at home.

How To Use Clotted Cream 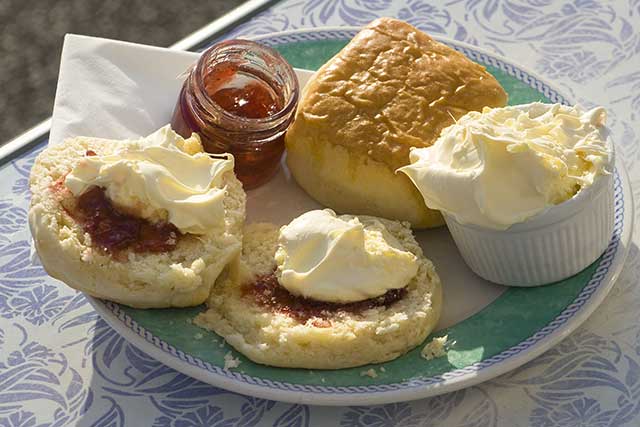 First of all; you can use clotted cream in any way you wish. Since the cream tastes so good, some people even enjoy it by the spoon.

However, here are a few different ways you can use it.

While it isn’t quite the same as regular (liquid) cream, eating fresh berries alongside a thick dollop of cream tastes great.

The classic/traditional/old-fashioned way to eat clotted cream is with scones and strawberry jam (jelly). This way is how most people in the UK consume clotted cream.

For the tastiest scrambled eggs of all time, clotted cream can give eggs a thick and fluffy texture and a delicious taste.

To make these, just add a little (extra) clotted cream to your favorite scrambled eggs recipe.

Clotted cream can be hard to find in the United States, but some Whole Foods stores sell it.

Additionally, several online stores (like Walmart and Amazon) sell it, but the price can be a little on the expensive side.

If you can’t find a reasonably priced option, it may be worth trying the homemade version.

For those that live in the UK, it should be possible to find clotted cream in almost any larger store for a reasonable price.

Availability in other countries will vary, but checking local import shops or an online search may help to find it.

Clotted cream is a delicious dairy food, and it is worth trying at least once for those who have never had it.

Although the nutrition profile isn’t anything spectacular, it is an excellent source of vitamin A.

But the best reason to try it is the incredible taste it offers.

Agreed! It works well with raspberries too.