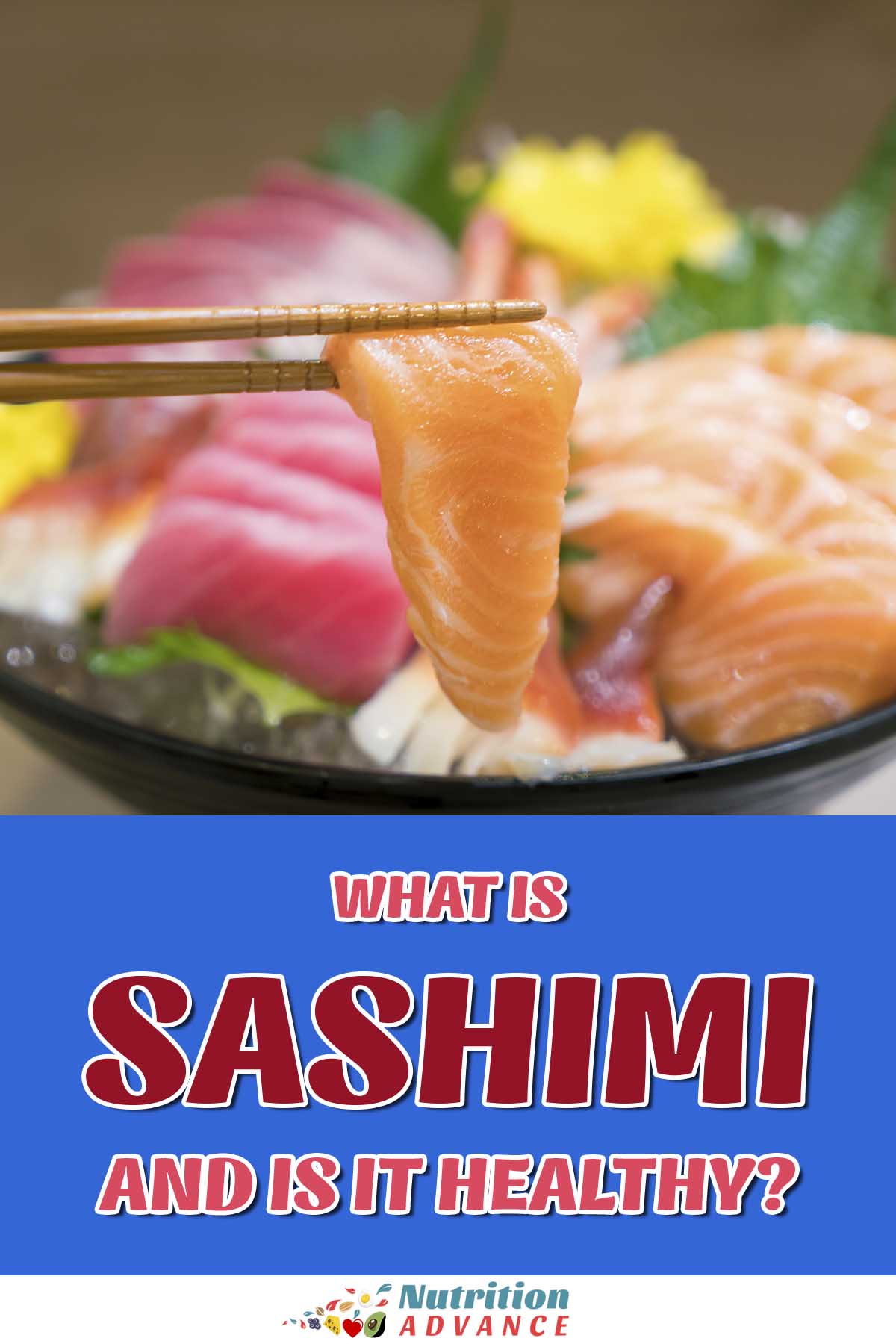 Sashimi is a delicious type of Japanese food that enjoys popularity around the world.

Unlike sushi, there is no rice involved, and sashimi is merely thin slices of raw fish.

In this article, we examine what sashimi is, the most popular varieties and their nutritional values, and the potential benefits and risks of raw fish. 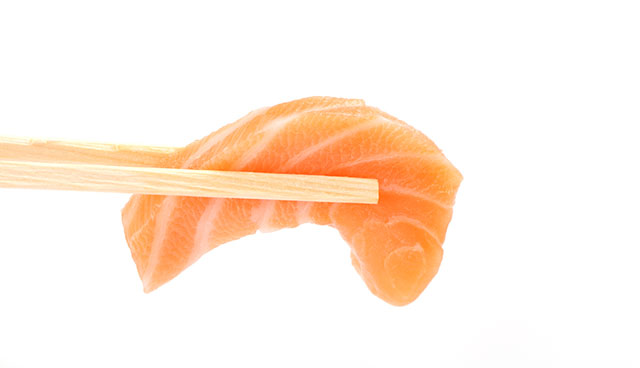 In Japan, seafood is usually served raw, and sashimi is the name given to thinly sliced pieces of raw fish.

The precise thickness of the sashimi will depend on the species of fish.

Japanese people consider sashimi to be a delicacy, and the dish can involve a wide assortment of different fish.

While some people get confused between sushi and sashimi, there is a clear difference;

Although many different condiments may be served alongside sashimi, soy sauce, wasabi, and ginger are common ingredients. Sometimes pickled ginger, known as ‘gari,’ is served.

The reason for this is because freshwater fish is more likely to be contaminated with parasites (1).

Although ‘sashimi-grade’ (or sushi-grade) fish has no official quality checks or guarantee, it is still important to look for this kind of designation when buying fish for sashimi.

In short, sashimi-grade means that the sellers confirm it is safe to eat the raw. This means that the fish has been stored at appropriate temperatures to prevent any potential bacteria from growing (2).

Ikejime involves inserting a metal spike into the brain of the fish. This ‘spiking’ happens from behind the head as soon as the fish lands on the boat. This method is thought to be the best way of killing the fish for two main reasons;

Salmon and tuna are two of the most commonly known types of sashimi, but there are dozens of different varieties.

The following table lists some of the most popular kinds of sashimi, including their Japanese name, species, and description.

While it is difficult to ascertain the precise nutritional values of sashimi, the average piece of sashimi weighs approximately 1 oz (28.3 grams).

Based on this, and using nutrition data from the USDA Food Composition Databases, here are the basic nutrition facts for several popular types of raw fish (where available) (4, 5, 6, 7, 8, 9, 10, 11).

Firstly, most of the potential health benefits from consuming sashimi come from the nutrient content of the fish itself.

In other words, they are not unique benefits, and cooked fish can also provide these same nutrients.

However, sashimi might offer one particular benefit due to the fact it is raw.

Here is a summary of the benefits.

Oily fish is the best dietary source of omega-3 fatty acids, which play an essential role in human health.

On this note, numerous studies show that a higher intake of oily fish has benefits for cardiovascular health (12, 13, 14).

Key Point: Sashimi can be an excellent source of omega-3.

Research shows that cooking method (and temperature) may affect the omega-3 content of fish (15, 16).

For example, one study tested cooking skipjack tuna in several different ways to analyze chemical (nutritional) changes within the fish.

In other words; cooking fish at higher-heat temperatures may lead to losses in the omega-3 content.

As a result, sashimi most likely offers more omega-3 than any form of cooked fish.

Key Point: Since sashimi isn’t exposed to high temperatures, all the beneficial omega-3 fatty acids should be preserved.

As shown in the nutrition facts section, all sashimi (and fish in general) is a rich source of dietary protein.

Per 100 grams, sashimi offers around 20-25 grams of protein, depending on the fat content of the fish.

Additionally, protein from fish is ‘complete,’ meaning that it contains all nine essential amino acids in adequate concentrations (17).

Sashimi from fatty fish such as mackerel, salmon, and tuna can provide a good source of vitamin E tocopherols (18).

Vitamin E is an essential nutrient that has an antioxidant role within the human body (20).

Additionally, fish can contain a wide range of antioxidant compounds including (21, 22);

Among these compounds, there is a fair amount of research on a carotenoid called astaxanthin. This carotenoid occurs in seafood with orange pigmentation such as salmon and shrimp (23).

Furthermore, a recent small randomized controlled trial suggested this effect may extend to humans too. In this two-month study, astaxanthin supplementation appeared to reduce UV-induced skin deterioration compared to a placebo (26).

Key Point: Dependent upon the particular type of fish, sashimi may provide a range of antioxidants.

Rich In Essential Vitamins and Minerals

Generally speaking, most fish is an excellent source of vitamins and minerals.

For this reason, sashimi can add a lot of nutrients into our diet.

Based on the nutritional profiles of mackerel, roe, salmon, and tuna, we can see that raw fish offers particularly high amounts of B vitamins, magnesium, selenium, and vitamin D (5, 6, 8, 9).

In addition to these nutrients, fish offers a wide range of additional vitamins and minerals.

Concerns and Potential Drawbacks of Sashimi

While well-sourced and prepared sashimi can be a healthy choice, there are also some potential concerns about eating raw fish.

Unfortunately, sashimi can have parasites such as tapeworm and roundworm.

Freshwater fish, or fish that spend time in freshwater such as salmon and trout, can carry a type of tapeworm larvae belonging to the Diphyllobothriidae family.

These tapeworms can infect humans, which leads to a condition known as diphyllobothriasis (27, 28).

Infection with diphyllobothriasis is short-term but may cause symptoms such as constipation, fatigue, diarrhea, and general abdominal pain (29).

It is also possible for marine fish, or fish that spend time in the ocean, to contain parasitic roundworms. Certain species of roundworm can infect humans and cause various problems (30).

Firstly, Anisakis roundworms can cause an infection in the gastrointestinal tract called anisakiasis (31).

Symptoms of this infection include gastrointestinal issues such as nausea, diarrhea, and abdominal pain, as well as a muscular weakness (32).

Additionally, another type of roundworm species called Gnathostoma, which is native to South-East Asia, can cause human infection. This infection is called gnathostomiasis, and it can cause painful abdominal symptoms (33).

In some cases, the infection can spread beyond the intestines and potentially lead to severe conditions like meningitis and encephalitis (34).

Once again, the roundworm that can cause this gnathostomiasis is native to South-East Asia, and it is unusual in the Western world.

Source of and Storage of Sashimi Is Important

Since sashimi can harbor parasitic infections, it is vital to buy the fish from a trustworthy source.

Sashimi-grade fish is usually flash-frozen at a temperature of -37°C (-35°F) for 15 hours. According to the Food and Drug Administration (FDA), this temperature is a reliable way to kill parasites (27, 35, 36).

Key Point: Parasitic infection is a possibility with raw fish, but flash-freezing is a way to kill any potential parasites present.

While the risk of food poisoning from sashimi consumption is low, there have been several types of bacteria found in raw fish.

The risks posed from food poisoning are more pronounced in individuals who are pregnant or who have weak immune systems, such as the very young and the elderly (38).

Once again, sourcing sashimi from a trustworthy seller is one of the most important ways to minimize any potential issues.

Proper storage and hygiene procedures are the best ways to prevent the bacterial contamination of sashimi (39).

Key Point: Similar to most raw foods, food poisoning can be a concern, especially in the absence of proper food hygiene.

While not a unique concern to sashimi, allergy to finfish and shellfish is a potential concern.

For instance, according to research, an estimated 2.3% of the United States’ population has a seafood allergy (40).

Seafood allergies can cause symptoms such as abdominal pain, cramps, dizziness, nausea, and severe cases may lead to anaphylaxis (41).

People with any suspected seafood allergy should consult with their doctor before trying sashimi.

Some seafood can contain high concentrations of heavy metals such as mercury.

Among typical fish species used for sashimi, tuna and swordfish are particularly high in methylmercury (42, 43).

On this note, one study demonstrated that just one piece of tuna sashimi contained more mercury than the provisional tolerable weekly ingestion (PTWI) for adults (44).

Fish used for sashimi that contains low concentrations of mercury include roe, salmon, shrimp, and trout. For further information, the FDA maintains a listing of the mercury levels in commercial fish here.

While sashimi alone contains very little sodium, it is often served alongside soy sauce, which contains large amounts of salt.

For example, just one tablespoon of soy sauce provides 900 mg of sodium, which is equivalent to 38% of the daily recommended intake (45).

While this may not be a concern for everyone, this may be an issue for individuals with salt sensitivity or hypertension. Research shows that large doses of sodium can significantly raise blood pressure in these individuals (46, 47, 48).

As shown in this article, sashimi can be a healthy choice. This Japanese dish offers a good range of nutrients, more omega-3 than cooked fish, and several other compounds with potential benefits.

On the downside, there is a risk of parasitic and bacterial contamination.

However, buying sashimi from trustworthy sauces appears to confer minimal risk. In the United States, there were 2,646 illnesses and 11 deaths from consuming any seafood (not just raw fish) over 33 years (49).

While any foodborne illness is regrettable, these figures do show that the absolute risk from eating sashimi is quite low.

All in all, sashimi is a delicious dish that offers several benefits and minimal risk.

For more on seafood, see this guide to the best fish sources of omega-3.