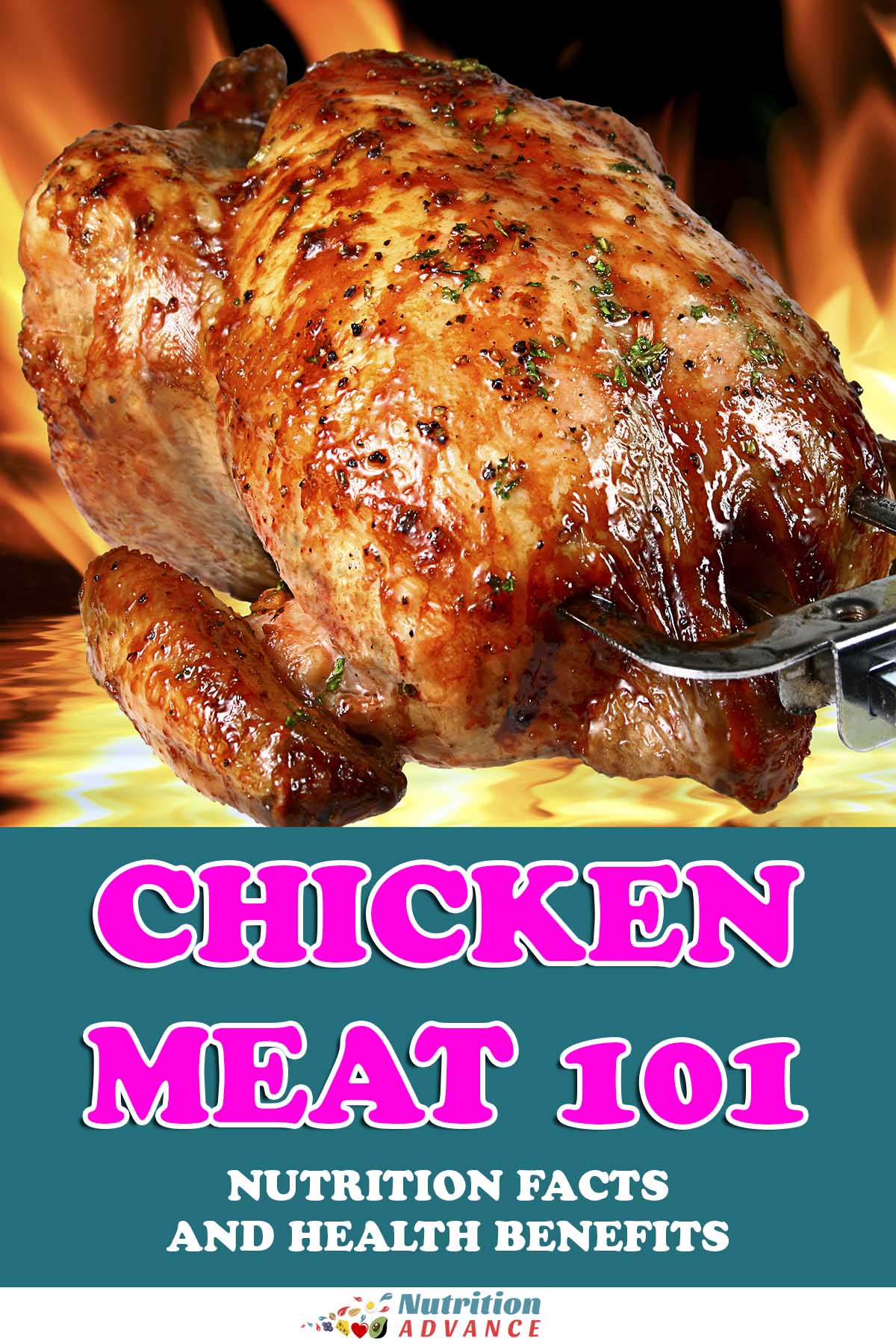 Chicken is the most popular type of poultry, and it is the second most consumed meat in the world.

This “white meat” is affordable, nutritious, and it offers a wide range of nutrients for very few calories.

However, there is a common belief that chicken is a poor nutritional substitute for red meat. Is this true?

In this article, we examine chicken’s nutrition profile and the potential benefits that it offers. 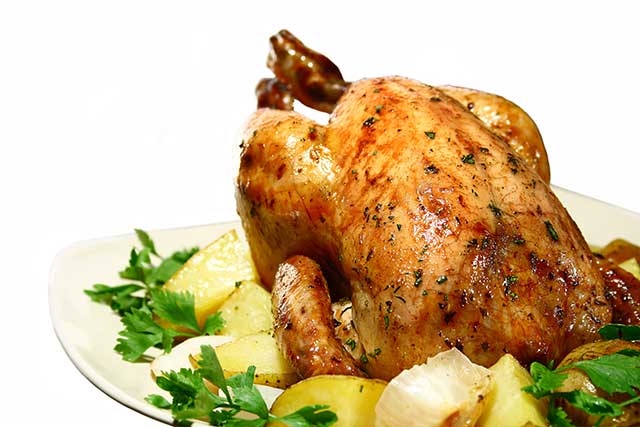 Before we look at some of the benefits chicken offers, let’s first take a look at the full nutrition profile.

The following data, sourced from the USDA Food Composition Databases, displays the nutritional values per 100 grams of raw chicken.

For convenience, you can see the nutrition data for two of the most popular varieties; chicken breast and chicken thigh, either with skin or without (1, 2, 3, 4).

Key Point: Chicken is an excellent source of protein, B vitamins, and selenium.

The benefits of chicken include the meat’s nutrient profile and several bioactive compounds that chicken contains.

Here are some of the benefits that chicken offers.

1) Chicken Is A Source of Creatine

Chicken is a good source of creatine.

Creatine is a compound that the human body produces naturally from three amino acids; arginine, glycine, and methionine (5).

However, we can also obtain creatine from various foods and supplements.

Depending on the exact cut, chicken offers between 300 and 500 mg of creatine per 100 grams. This amount is similar to the creatine levels found in red meat (6).

Research shows that we can expect to find around 850 mg of creatine per 200 gram serving of skinless chicken breast (7).

Creatine may have various benefits for our health, and research demonstrates that it can enhance physical performance, recovery, strength, and stamina (8, 9).

Additionally, ongoing research suggests that the compound may have benefits for cognitive health (10).

Key Point: Chicken provides one of the best dietary sources of creatine.

While most types of meat offer a similar protein content, their protein density can vary a lot.

For example, 100 grams of chicken breast provides more than 23 grams of protein for only 110 calories (1).

Although foods like bacon and fatty steak are delicious, they can’t compete with chicken for protein density.

Since chicken offers such a concentrated source of protein, it is an excellent dietary addition for anyone looking to increase their protein intake without consuming large amounts of extra calories.

Getting enough dietary protein is important for numerous reasons, and among its many other functions, protein helps with (11, 12);

Key Point: Chicken is one of the most protein-dense foods we can eat.

Chicken provides a large amount of a compound called anserine.

Anserine is a bioactive antioxidant compound found in a wide range of animal foods. However, anserine concentrates in muscle tissue, making chicken breast one of the very best sources (13).

While there is not a large amount of research on this compound, studies on anserine supplementation show promise.

This particular study suggested that anserine supplementation may protect against negative age-related structural changes in the brain (16).

Key Point: Chicken is among the best food sources of anserine.

4) Provides An Excellent Source of B Vitamins

Chicken supplies good concentrations of all the essential B vitamins.

These B vitamins have numerous vital roles in the human body, and they play a crucial role in energy metabolism and brain health (17).

Chicken meat contains a large amount of vitamin B3 (niacin), offering 56% of the RDI per 100 grams. In other words; a typical chicken breast should provide the full reference daily intake of this vitamin (1).

The human body requires sufficient vitamin B3 for hundreds of enzymatic reactions (18).

While chicken is not quite as concentrated in B vitamins as red meat like beef and lamb, it is still a good source of them.

See this full guide to the differences between poultry and red meat for more information.

Key Point: Chicken is a rich source of B vitamins.

Most people know that collagen is good for the health of our skin.

However, our body produces collagen through the synthesis of amino acids.

Generally speaking, the most concentrated sources of glycine include meat cuts from near the bone, skin, and connective tissues.

Therefore, chicken thigh (including skin) is one of the very best dietary sources of glycine. Per 100 grams of chicken thigh, there is a supply of approximately 1137 mg of glycine (20).

Glycine may also have further benefits beyond collagen synthesis.

Notably, research suggests that an optimal balance of methionine (found in muscle meat) and glycine may have longevity benefits.

The most concentrated mineral found in chicken meat is selenium.

Selenium is an essential mineral that works as an antioxidant in the body.

Additionally, some researchers believe that selenium may potentially reduce oxidative stress and inflammation in the body, but the existing research is as yet unclear on this (25, 26).

On the negative side, selenium status can be low in areas where the soil is deficient in the mineral. For this reason, selenium is a potential nutrient of concern for those who live in such areas and avoid animal foods (27).

7) Chicken May Help To Promote Satiety

The satiating properties of food can wildly differ.

For instance, a sugar-crusted donut and a can of cola may make you feel full for an hour or so. However, urges to eat more food usually appear sooner rather than later.

On the other hand, high-protein foods like eggs can promote satiety (28).

While the exact mechanisms behind increased satiety are a topic of dispute, the existing research points to proteins being an essential factor. Protein is thought to be the most satiating out of the three macronutrients (29).

Since chicken meat is such a protein-dense food, it likely plays a beneficial role in improving levels of satiety.

Key Point: Chicken is a rich source of protein, and it may help to enhance satiety levels and reduce food cravings.

8) Chicken Meat Is High In Carnosine

In addition to its anserine content, chicken is also a good source of carnosine.

Carnosine is a compound synthesized from the combination of the amino acids beta-alanine and l-histidine in skeletal muscle (30).

Interestingly, existing research suggests that carnosine may have some useful health benefits, likely from its ability to bind excessive glucose in the blood (31).

For example, a systematic review of animal, human, and in vitro studies demonstrated that carnosine could help to inhibit the formation of advanced glycation end products (AGEs) (32).

AGEs form by sugars combining with proteins or fats in the body, and they have links to an increased risk of cardiovascular disease and other chronic illnesses (33).

Key Point: Chicken meat is one of the best dietary sources of carnosine.

As this article shows, chicken provides more nutritional benefits than many people believe.

Firstly, it is high in protein, and it supplies a good range of vitamins and minerals.

While chicken isn’t quite as nutrient-rich as red meat, nutritionally it still has a lot to offer.

As a bonus, there are not many foods that taste as good as oven-roasted chicken.

For more articles on poultry, see this guide to turkey meat.

I have relied on chicken breast protein and nutrients for 6 years. I never buy or eat with skin on or cook with skin on. I pair it with 4 cups of vegetables and seldom use carbs intentionally. I consume about 12 pounds a month and use salmon as a second go to protein. Hamburger and steak are tasty but seldom used. Anyway the chicken and salmon protein is certainly healthy and keeps me going for 6 hours or more at gym and moderate speed on my bicycle ….. Losing weight slowly and healthfully as I learn to eat better… Read more »

Congratulations on your weight loss progress! Slow and steady loss is often the most sustainable. Salmon and chicken are certainly good sources of protein. However, unlike you, I rarely eat the chicken without the skin – it’s just too tasty…