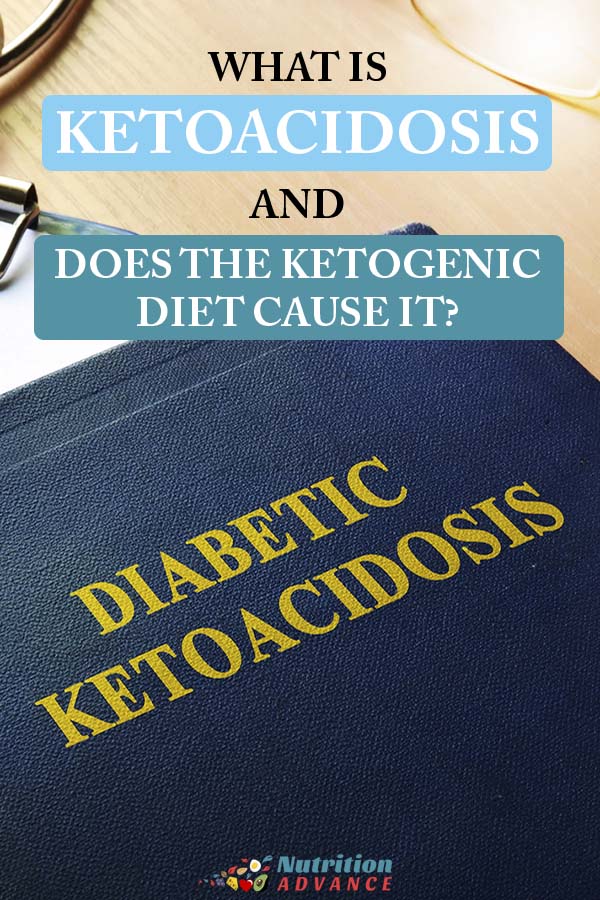 Ketogenic diets can be good or bad for our health.

The relative health merits of the diet primarily depend on the formulation, and whether it is the right fit for the individual.

However, we can often see stories warning us about the “dangers of keto.”

In these stories, one common point that often comes up is ketoacidosis.

In short; the biological state of ketoacidosis is a medical emergency, but do ketogenic diets cause it?

This article examines this question and analyzes the critical differences between ketosis and ketoacidosis.

According to the American Diabetes Association, “diabetic ketoacidosis is a serious condition that can lead to diabetic coma (passing out for a long time) or even death” (1).

Sadly, ketoacidosis has very high mortality rates, and it is the most common cause of death in young people with diabetes (2).

Put simply, diabetic ketoacidosis is a complication of type 1 diabetes, and it occurs when ketones in the blood become too high (3).

Ketones are compounds that form from the breakdown of fatty acids within the body, and they are an alternate fuel source to glucose when carbohydrate (or total food intake) is very low.

When our body increases the production of ketone bodies for energy purposes, we can refer to this metabolic state as “ketosis.”

Since people undertake ketogenic diets with the aim of “achieving ketosis,” will these higher ketone levels cause ketoacidosis?

However, there are some clear differences between ketosis and ketoacidosis.

Key Point: Ketoacidosis is a very dangerous (and potentially fatal) condition caused by extremely high ketone levels in the blood.

How Do Ketogenic Diets and Ketosis Work?

Before we examine whether ketogenic diets can cause ketoacidosis, we first need to understand how a keto diet (and nutritional ketosis) work.

First, there are multiple reasons why someone might want to start a ketogenic diet, and these include;

If someone has made their mind up to start a ketogenic diet, then they will need to cut carbohydrate intake to increase the production of ketones.

For someone to start producing high enough levels of ketones, it is necessary to restrict the available fuel (glucose) the body has to use.

If the body cannot fuel its energy needs from glucose, it will start to make more ketones (7).

To “enter ketosis” generally requires limiting carbohydrate intake to a maximum of around 50 grams per day.

However, this is not a set figure, and some people will require even less carbohydrate, and others may be OK with a little more.

Once someone is in the nutritional state of ketosis, their body will start producing higher and higher levels of ketones.

Key Point: Ketogenic diets restrict sources of glucose. This lack of glucose encourages the body to increase the production of ketone bodies.

Do Ketogenic Diets Cause Diabetic Ketoacidosis?

The simple answer is no, but this answer does require some nuance, which we will come to later.

Importantly, healthy people can regulate their production of ketones better than someone with type 1 diabetes can.

In people who are metabolically healthy, ketone levels will rise in response to carbohydrate restriction.

If the amount of available glucose is very low, then ketone levels will progressively become higher and higher.

However, there is a mechanism through which our body can stop ketones from becoming dangerously high, and it requires insulin.

How Does Insulin Lower Ketones?

Insulin can lower the concentration of ketone bodies in the blood, and it does this through three mechanisms (8);

A small insulin release regulates ketone levels and stops them from becoming too high.

Additionally, the PH of the blood stays the same during ketosis, and it does not become acidic (9).

If you know anything about type 1 diabetes, then you can probably understand why a problem can occur here.

First, a person with type 1 diabetes will start to produce ketones as they enter ketosis.

As ketone levels rise, insulin becomes vital to regulate and control them.

However, people with type 1 diabetes are unable to produce sufficient amounts of insulin.

At this stage, assuming that someone with type 1 diabetes does not use an appropriate insulin dose, then extremely high levels of ketones could develop, which can cause ketoacidosis (10).

Key Point: For people with type 1 diabetes, levels of ketones in the blood can rise to dangerous levels without careful and appropriate doses of insulin.

Are High Ketone Levels Only a Risk For People With Type 1 Diabetes?

As previously mentioned, the answer to this question needs some nuance.

One significant consideration is this: ketoacidosis can often be the first symptom of type 1 diabetes (11).

As a result, many people do not know they have type 1 diabetes.

What makes this potentially more dangerous is the fact that these people will not have adequate control of their insulin levels. Sadly, numerous undiagnosed type 1 diabetics die of ketoacidosis every year.

One study, which dubbed ketoacidosis ‘a silent death,’ found that nearly a third of deaths from diabetic ketoacidosis occurred in individuals who did not know they had diabetes (12).

Another potential concern is something referred to as “non-diabetic ketoacidosis.”

Although very rare, there have been a small number of cases where a non-diabetic has developed ketoacidosis on very low carb diets.

These cases were all women who were breastfeeding.

In total, there are around 6 or 7 reports of non-diabetic mothers developing ketoacidosis while breastfeeding on a low carb diet (13, 14).

The reason for this is not fully understood, but it is known that lactating women have higher glucose requirements (15).

For context, it is worth remembering that these occurrences are extremely rare.

However, safety is the most important thing, and I think it is something to at least be aware of.

Key Point: Ketogenic diets almost never lead to ketoacidosis in healthy people. However, it appears that there could be small risks for non-diagnosed diabetics and lactating mothers.

The list below shows some of the most common symptoms of ketoacidosis (16);

Anyone who feels they have ketoacidosis symptoms should seek medical attention immediately.

As this article demonstrates, ketosis and ketoacidosis are very different things, and ketogenic diets are almost never a cause of ketoacidosis.

That said, it is important to do things the right way, and a well-planned ketogenic diet needs careful research before starting.

In the early stages of the diet, it could be a good idea to measure ketone levels to monitor how things are going.

Lastly, people with type 1 diabetes should always carefully plan their diet and medication in conjunction with their medical team.

For more on ketogenic diets, see this guide to how keto and basic low-carb differ.

2 thoughts on “What Is Ketoacidosis and Do Ketogenic Diets Cause It?”