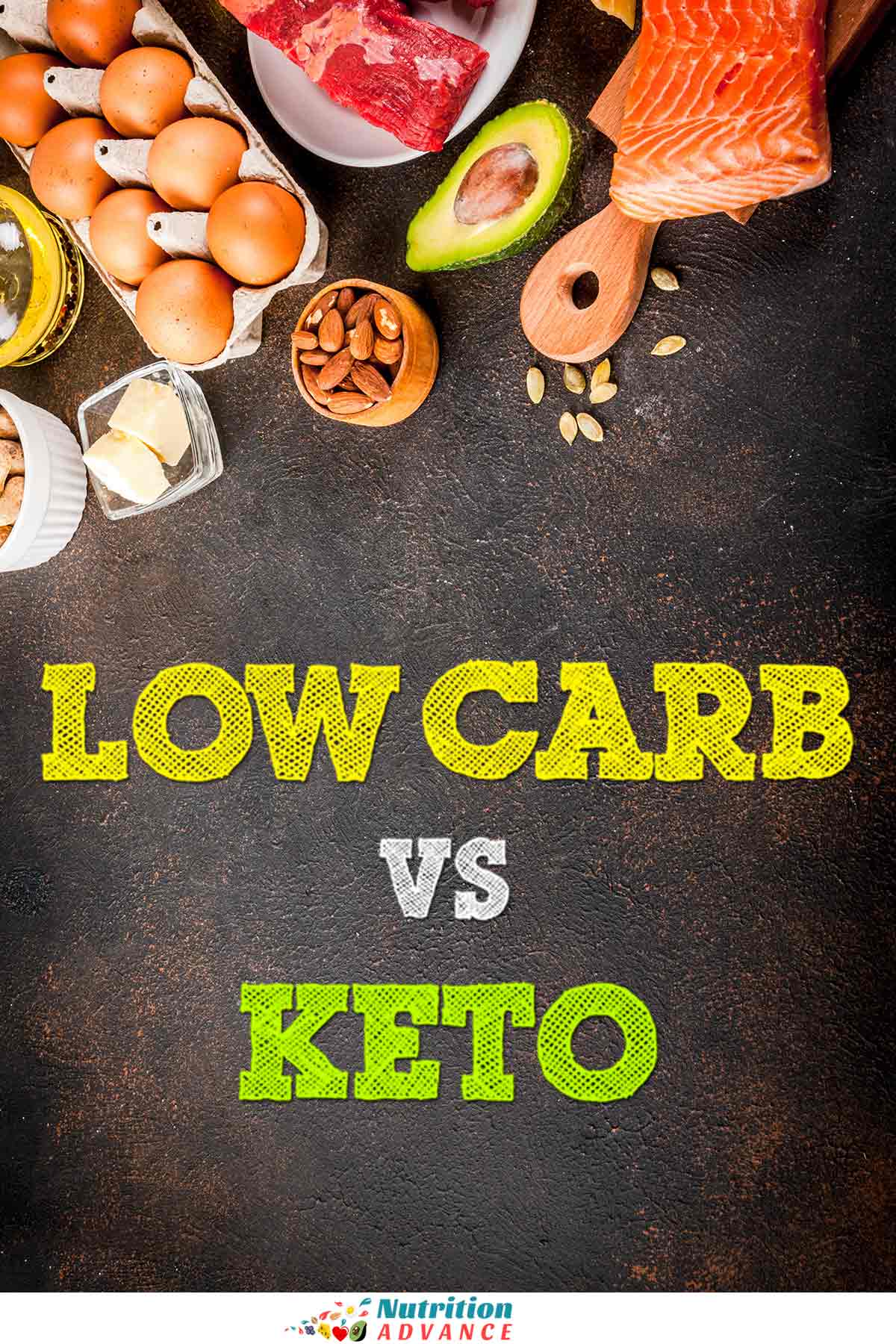 Low carb and ketogenic diets are a way of eating that many people find beneficial.

However, there are some clear differences between keto and general low-carbohydrate diets.

This article looks at how the two diets differ, their benefits and drawbacks, and what some of the latest scientific research demonstrates.

Why Do People Do Low Carb and Keto Diets? 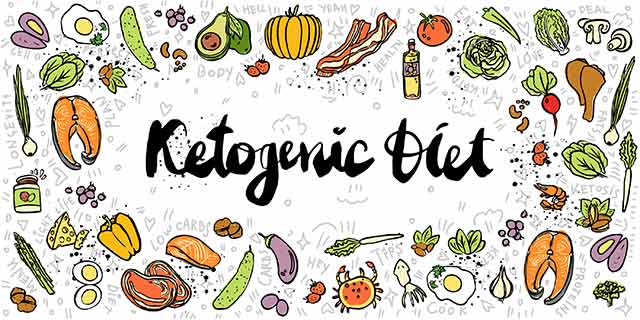 Firstly, people opting for either of these diets may have similar aims such as weight loss, managing a health issue, or just better overall health.

However, by the very nature of these two diets, people doing them may have different objectives/targets.

Here are some of the reasons people may do either diet;

Individuals opting for a ketogenic diet often have similar reasons for starting, but there are a few slight differences;

The main reason why people choose a liberal low-carb diet is (usually) for general overall health.

On the other hand, people starting a ketogenic diet may have more specific objectives from their diet.

Key Point: There are similar reasons for starting low carb and ketogenic diets. However, ketogenic diets are more widely used as a medical intervention.

Macronutrient Ratio: How Much Carbohydrate, Fat, and Protein?

While these macronutrient ratios are not set in stone, the following energy intake percentages are typical of each diet;

Based on a typical 2000 calorie diet, this would make the upper carbohydrate limits 100 grams on low carb, and 50 grams for keto.

One of the reasons for the more extensive macronutrient variations for the low carb diet is because there are two primary forms of ‘low carb’;

What Foods Can You Eat On Low Carb vs. Keto? 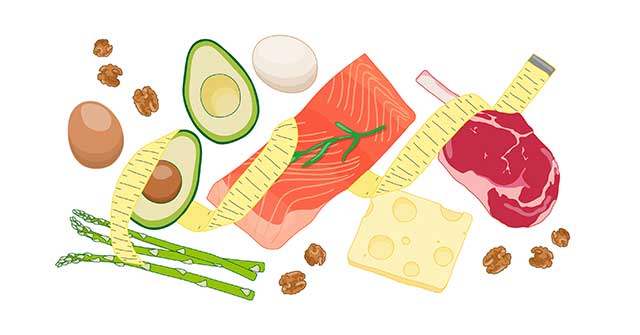 Any diet that involves carbohydrate restriction will necessitate restricting certain types of food.

Since general low carb diets have a higher upper limit of dietary carbohydrate, they are more lenient in this regard.

The table below shows which foods are suitable (and not suitable) for each diet.

Foods such as fruit, legumes, candy/sugar, and grains are too high in carbohydrate to be suitable for a ketogenic diet.

However, low-sugar fruits and root vegetables can fit into a ketogenic plan.

Regarding low carbohydrate diets, a “liberal” plan of around 20% carbohydrate could technically include most of these foods. That said, high-sugar fruits and legumes would quickly fill up the carbohydrate allowance and potentially displace other foods.

For people who enjoy eating higher amounts of fruit and vegetables, the ketogenic diet might be too restrictive. In this case, a general low-carb diet would be a better fit.

Key Point: Due to the need for strict carbohydrate restriction, many foods are not compatible with ketogenic diets. Low carb diets may be a better choice for those who want to enjoy a wider choice of foods. 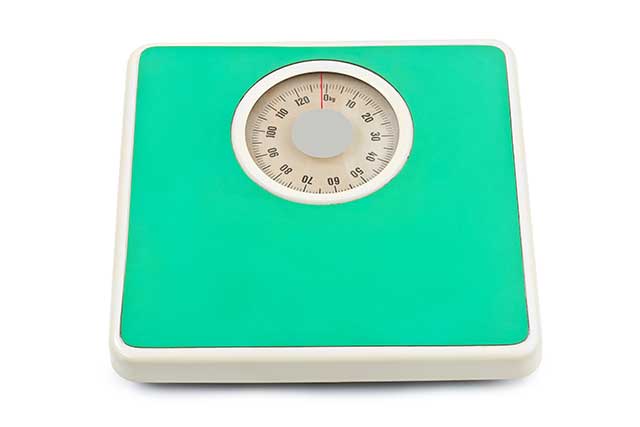 First of all, neither low carb nor keto diets guarantee weight loss.

It is possible to find claims about eating unlimited fat and not gaining weight, but the evidence does not support this.

One of the reasons why low carb and ketogenic diets can be an effective strategy for weight loss is that they encourage satiety and thus help to regulate appetite.

While we don’t know precisely why this is, there are a few potential factors to consider.

How do low carb and ketogenic diets compare for individuals looking to lose weight?

First, there have been numerous controlled studies on using low-carb and very-low-carb (ketogenic) diets for weight loss.

The majority of these studies have featured overweight/obese patients or people with type 2 diabetes.

Since all intervention studies have different designs and provide different levels of support/education, it is impossible to compare these studies in an accurate manner directly.

However, for a general overview, here is an analysis of weight loss results from randomly selected low-carb and ketogenic diet studies.

For this comparison, we are classing low-carb diets as anything from 50 grams carbohydrate per day to <20% of total energy intake.

The following results are from studies investigating the effects of <50 g (or <10% energy) carbohydrate per day on weight loss.

Summary: Both Low Carb and Keto Diets Are Proven For Weight Loss

As shown, both low carbohydrate and ketogenic diets are evidence-based weight loss interventions.

While it is possible to read claims about why one is better than the other, the actual research shows both are beneficial.

Ultimately, whichever of the two diets an individual enjoys and feels comfortable with will encourage adherence and, therefore, dietary success. 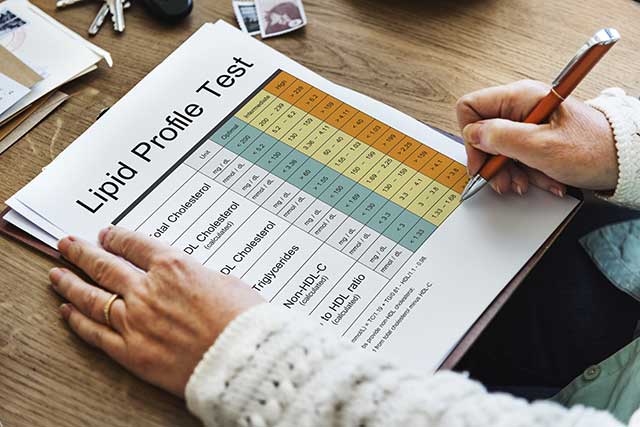 Diets higher in fat may also raise LDL levels in some people, mainly if there is a high ratio of saturated fat (11).

Ketogenic diets usually have a more pronounced effect on all of these markers compared to more liberal low carb diets. The main reason is that the diet is both higher in total fat and lower in carbohydrate.

Overall, studies demonstrate that both diets (when well-implemented) may improve markers of cardiovascular risk (14, 15).

In or Out of Ketosis: Does It Matter?

Many people following a ketogenic diet aim to be in a constant state of ketosis, but is this important?

First of all, unless the diet is being used specifically for this purpose as a medical intervention, there is no requirement to be in ketosis constantly, nor is ketosis necessary for weight loss, which is another common myth.

There are also more important issues to consider above and beyond the level of ketones in the body.

For instance, if a diet allows someone to feel healthy, gives them good markers of health, and has a positive effect on their body composition, why would the number of ketones their body is producing matter?

In other words; being “in ketosis” isn’t the most important thing – good health is, and some people overlook this.

That said, ketosis can have some health benefits, and if it is essential to someone, then a ketogenic diet is going to be the preferred choice.

For other people who just want to improve their general health, a more liberal low-carb diet is probably the easier option.

Key Point: Being in or out of ketosis isn’t necessary for losing weight or achieving good health.

Low Carb vs Keto: How Do They Compare?

To try and further summarize both diets, here are some of the ways they positively and negatively compare.

Key Point: Both low carb and keto diets have potential benefits and drawbacks.

Keto vs. Low Carb: Which Is Better?

The simple truth is that neither diet is “better” than the other.

In short, we all have different needs from our diet, and the best diet is the one that best suits an individual’s lifestyle.

Providing each diet is well-researched before starting, either can be a healthy choice.

6 thoughts on “Low Carb vs. Keto: What Are the Differences?”