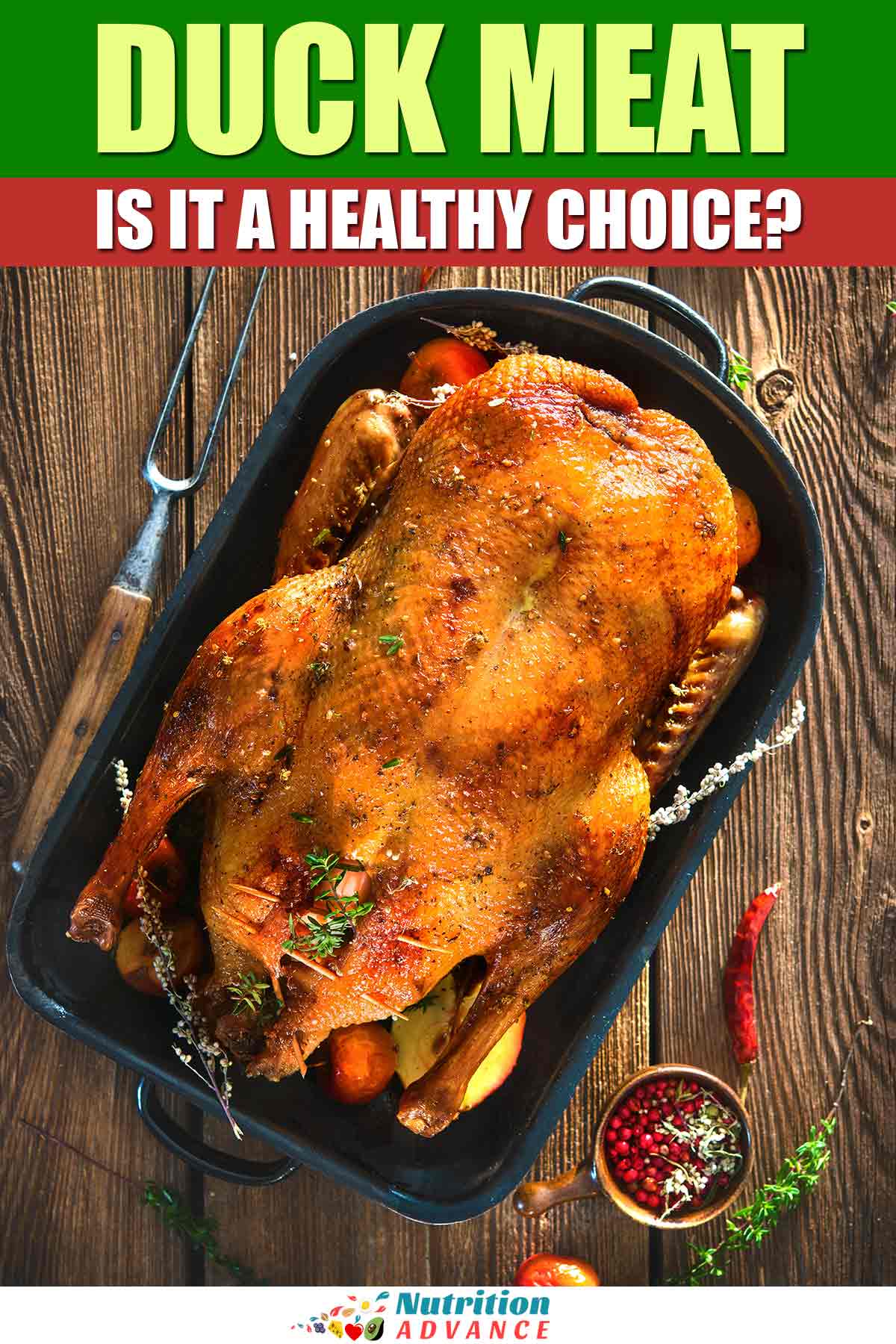 Duck meat is often simply referred to as ‘duck,’ and it is one of the less commonly consumed meats in the Western world.

However, is duck a healthy choice or best avoided?

This article examines the nutrition profile, benefits, and potential negatives of duck meat.

What Is Duck Meat?

Duck is a type of poultry, and it is especially prevalent in China, the home of the ‘Peking Duck.’

China is by far the world’s biggest producer of duck meat and produces around 65% of the global total.

Following China, France is the second biggest producer, and the United States is in ninth position (1, 2).

Although duck is not one of the more popular meats in the Western world, consumption has been increasing over recent years.

The Chinese dish ‘Peking Duck’ is the most famous duck meat dish in the world.

However, nations around the world consume a wide range of roasted and steamed duck dishes.

Generally, duck meat has a higher fat content than other poultry such as chicken and turkey, and the meat is darker in color.

Although duck can sometimes look red in its raw state, it is considered to be a type of white meat.

Duck meat has a much stronger flavor than both chicken and turkey.

The nearest comparison would be the darker parts of other poultry, but duck is still more flavorful.

As is the case with many foods, the higher fat content positively contributes to the overall taste profile.

Key Point: Duck meat is a type of poultry that is darker and fattier than chicken. The meat is most popular in China and France.

As shown in the table, duck offers a moderate amount of protein and a relatively higher fat content compared to other meats.

However, the majority of this fat comes from the skin, which anyone who wants a lower fat/calorie intake can remove.

The fat content is primarily saturated and monounsaturated fatty acids.

Similar to many other kinds of meat, duck is predominantly a source of B vitamins.

Selenium is the most concentrated mineral in duck, and the meat is high in phosphorus, iron, zinc, and copper.

Key Point: Duck is a high-fat variety of poultry that offers moderate protein content, and it is high in B vitamins, selenium, phosphorus, and iron.

Most of the health benefits of duck meat relate to the protein and nutrients it contains.

However, it does offer a couple of unique benefits that other meats lack.

1) Duck Skin Is a Significant Source of Glycine 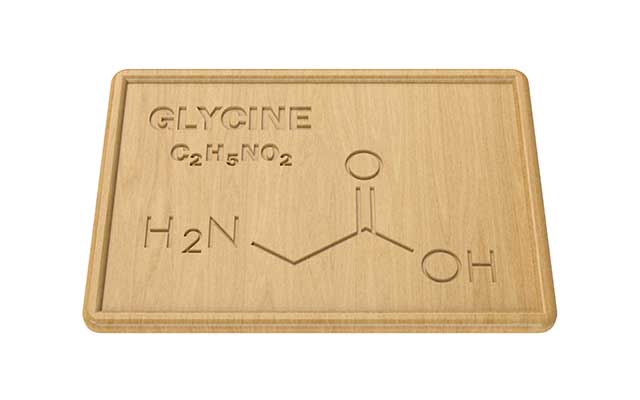 Presuming we eat the whole duck including skin, then duck offers a substantial amount of dietary glycine.

Glycine is an important amino acid that plays a wide range of roles within the body, and duck offers 1614 mg per 100 grams (4).

Although it is technically a non-essential amino acid (meaning our body can make limited amounts of it), there is evidence that dietary intake of glycine can have various benefits.

For example, glycine plays a crucial role in skin health and wound healing (5, 6).

The idea behind this effect is that balancing dietary glycine and another amino acid called methionine mimics a methionine-restricted diet, which is associated with longer life (10).

Lastly, even though glycine is classed as “non-essential,” some research suggests that we do not consume adequate amounts of it through our diet (11).

2) A Good Source of Dietary Protein

Per 100 grams, duck (including the skin) offers 19 grams of protein.

However, just the pure duck meat without skin provides an even more significant amount, supplying 23.5 grams per 100 g (12).

Protein plays some key roles in the human body, and among others, it is responsible for; 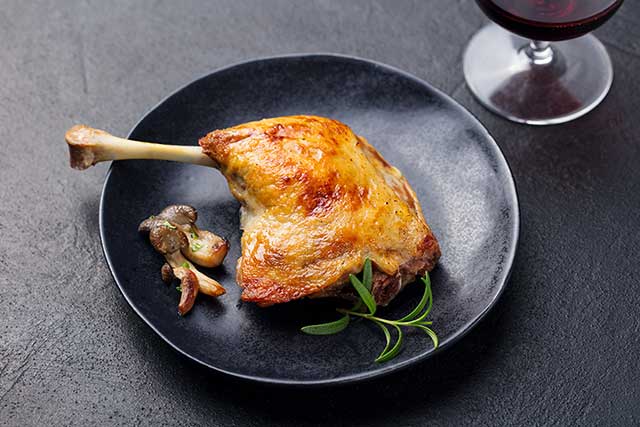 The primary mineral in duck meat is selenium, and this mineral offers a lot nutritionally.

Selenium is thought to be a kind of antioxidant, and it has benefits related to inflammation and immune response (13).

Notably, one study found that elderly female participants with the lowest blood levels of selenium had “significantly higher” risk of mortality over a 5-year period (14).

On the negative side, an inadequate intake of selenium is believed to affect up to 1 million people around the world (15).

Key Point: Duck is a rich source of the essential mineral selenium.

4) Full of B Vitamins

Duck meat contains a good range of B vitamins, and it is particularly high in niacin (vitamin B3).

Key Point: Duck provides good amounts of all the different B vitamins.

While duck is a healthy food that contains a variety of health-promoting compounds, there is one potential drawback to be aware of; contamination.

Firstly, research suggests this issue does not affect commercially raised duck, and it is more of an issue for wild birds.

However, one study found that duck species living in aquatic systems near to areas of environmental pollution showed excessively high levels of mercury and selenium.

Another study noted that this “could be a health concern” to human consumers of the ducks (20, 21).

A further study warns how ducks often live in aquatic habitats contaminated with a high degree of heavy metals. As a result, tests on duck meat regularly find mercury contamination levels that can exceed the amounts in high-mercury seafood (22).

For anyone eating wild duck on a regular basis, it would be beneficial to research the habitat from where the duck comes.

Key Point: Environmental pollutants such as mercury can be an issue with duck meat. 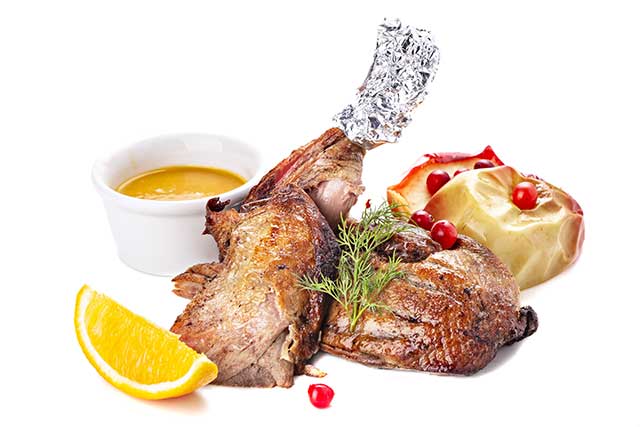 Since many people are unsure how to cook duck, here are two delicious recipe ideas; one for roasting and one for steaming.

If there is anything that tastes better than roasted meat, it is slow-roasts.

Salt, lemon, and herbs flavor this slow-roasted duck, and it only requires 30 minutes of prep.

The full recipe is available here.

For a French-style dish, this steamed duck recipe features a variety of flavorful herbs to give the duck a bold taste.

With ingredients including bay leaves, cloves, garlic, peppercorns, and salt, this one is big on flavor.

See here for the full recipe.

Duck is a nutritious meat that offers several beneficial nutrients and a great taste.

While it may be wise to check the origin of duck if it is wild (or game) meat, the overall nutrition profile makes duck a healthy choice.

For more on poultry, see this full guide to turkey.

2 thoughts on “Duck Meat: Is It a Healthy Choice? (and Full Nutrition Facts)”