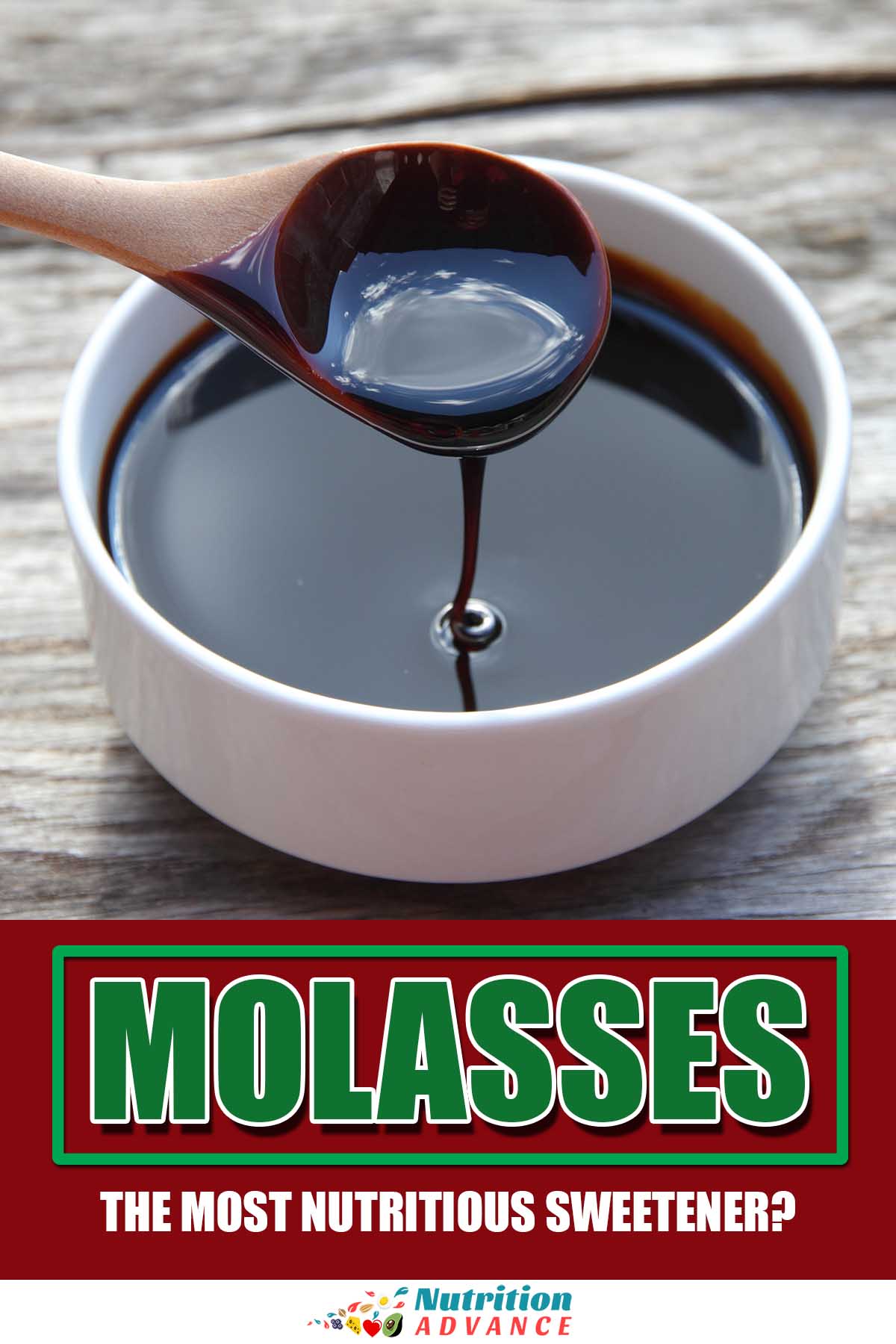 Molasses is a viscous sweetener with a deep black color.

Compared to some other caloric sweeteners, molasses sometimes gets praised for being a source of nutrients rather than just sugar.

In this regard, it is also easy to find information highlighting the supposed benefits of molasses.

However, can something so high in sugar be beneficial?

This article takes a look at the research on molasses as well as its nutritional values. 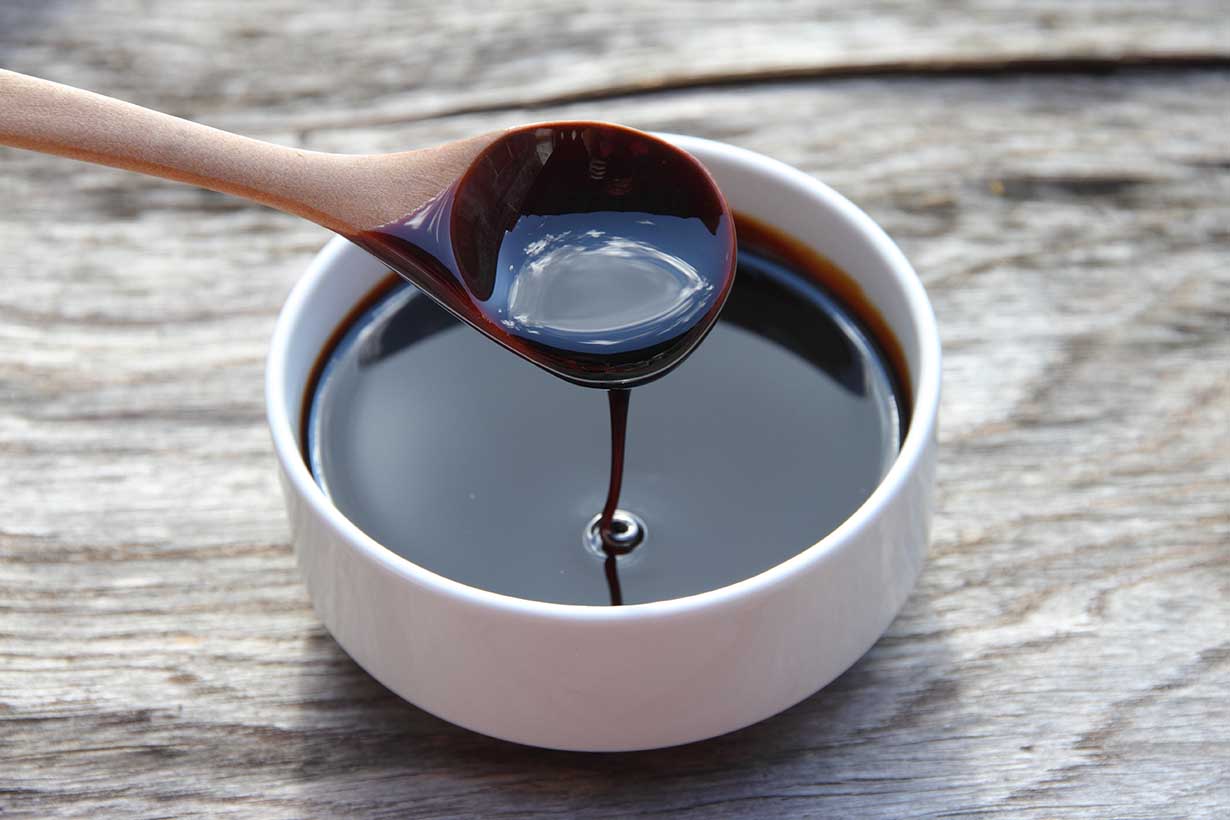 Firstly, molasses is different from many of the commercially available sweeteners.

For one thing, the product is far less refined than most other sweeteners, and it contains a broad range of nutrients.

Interestingly, molasses is a byproduct of sugar refining.

During the production of sugar, boiling extracted juice from the sugar cane turns it into a thick syrup-like liquid, and eventually, sugar crystals form.

After removing the crystallized sugar, the leftover sticky liquid is known as molasses (1).

Another name for molasses is ‘black treacle,’ and it has a thick and sticky texture that is somewhat similar to honey.

Molasses is used in a wide variety of baked goods, and it is a common ingredient in commercial rum production.

There are three different varieties of molasses. The first variety described above is known as ‘first syrup.’

If the leftover syrup is then boiled for a second time to extract more sugar, the remaining molasses is referred to as ‘second’ or ‘dark’ molasses.

Following the production of dark molasses, if the syrup is then boiled down for the third time and further sugar extracted, then the leftover thick paste is known as ‘blackstrap molasses.’

Compared to first syrup, blackstrap molasses has a darker appearance, and a much stronger, slightly bitter taste (2).

Key Point: Molasses is a thick and sticky sweetener, and it is a byproduct of commercial sugar production.

Molasses is primarily a source of simple sugars.

Using data from the USDA, the table below shows the basic nutritional values of molasses per tablespoon serving (3).

Molasses differs from other refined sugar products due to its provision of vitamins and minerals.

Using data from the USDA nutrition database and the FDA’s published daily values, here are the nutrients that molasses provides per tablespoon (20g) serving (3, 4).

As shown above, just a tablespoon serving of molasses provides a surprising amount of manganese, magnesium, and copper.

Key Point: Molasses is primarily a source of sugar, but it also contains moderate amounts of manganese, magnesium, copper, potassium, and selenium.

Molasses Has a Similar Glycemic Index To Refined Sugar

Despite being more nutritious than regular sugar, molasses has a very similar glycemic index to other refined sugars.

The glycemic index is a tool designed to show the relative impact that carbohydrate-containing foods have on blood glucose levels (5).

On this note, according to Harvard Medical School and the Linus Pauling Institute at Oregon State University, sucrose has an estimated glycemic index of 63-65 (7, 8).

In contrast, according to the University of Wisconsin’s Department of Family Medicine, molasses has a slightly (but not substantially) lower glycemic index of 55 (9).

In other words: the impact of molasses on blood sugar levels will be somewhat similar to regular sucrose.

For this reason, individuals trying to maintain tight blood glucose control may prefer to use a non-glycemic sweetener such as aspartame or monk fruit.

Key Point: Molasses has a slightly lower glycemic index than sucrose, but it is still moderately high GI.

Molasses Is a Rich Source of Polyphenols

Molasses is a relatively rich source of polyphenols, which are bioactive compounds found in plant foods. The polyphenols found within molasses include chlorogenic acid, caffeic acid, vanillin, and numerous other compounds (11).

Furthermore, in a study that compared the antioxidant activity of 12 commercial alternatives to refined sugar, dark molasses had a higher antioxidant content than honey, maple syrup, and all other sweeteners (12).

Several studies have analyzed the impact of molasses polyphenols in cell (in vitro) studies. In one instance, extracted polyphenols from molasses showed protective effects against colon cancer cells (13).

However, cell studies using extracted isolated compounds tell us little about how smaller concentrations of that compound as part of food acts inside a living human body.

Therefore, any potential benefits that molasses polyphenols may have would need confirming by human trials before any strong claims of benefits can be made.

An animal study suggested that regular, chronic intake of molasses may potentially have a detrimental effect on the humoral immune response (14).

In this study, for two months, the treatment groups of rats received drinking water that contained 0.057 grams of molasses per ml; the control groups received normal drinking water.

Two weeks before the study’s end, the rats were all immunized, and their antibody response was evaluated. In the analysis, the researchers found that the molasses treated rats had a significantly lower humoral immune response. Specifically, they had substantially decreased levels of anti-antigens.

The researchers noted that these findings demonstrated that molasses might potentially have a detrimental effect on the immune response.

However, it is always better not to over-interpret the results of one small study. For one thing, people tend to consume molasses occasionally, and they do not continuously feed on it at every meal.

Hence, it is debatable as to what relevance these findings have for molasses and human health.

Furthermore, other studies have demonstrated that chronically high sugar intake also affects the immune response, so this would not be an effect unique to molasses (15).

Key Point: A rodent study showed that continuous feeding on molasses may have a negative impact on immune response.

Is Molasses Good For You?

It is always difficult to say whether a specific food is “good” or “bad” with clarity.

One reason for this is because nutrition is all about substitutions: if someone doesn’t consume one thing, they’ll be consuming something else.

As for molasses: while it does contain a good range of nutrients, it is also very high in sugar.

Furthermore, the nutrients available in molasses are available elsewhere from more nutritious foods.

However, using molasses as a replacement for a heavily refined sweetener—such as table sugar or corn syrup—would be a positive swap.

All in all, there is no reason to start consuming molasses, but it would be a suitable (and more nutritious) replacement for refined sugars.

Molasses can be used in the same way as other sugar and syrup products.

For example, it can be added to foods and drinks as a sweetener, in sauces and marinades, or it can be used for baking purposes.

If anyone wants more ideas, there is a useful collection of molasses recipes here.

Artificial and Natural Sweeteners: A Guide To 19 Popular Options

Is Honey a Healthy Alternative To Sugar?

Is Aspartame Bad For You? An Evidence-Based Guide

Monk Fruit Sweetener: Is It a Healthy Choice?