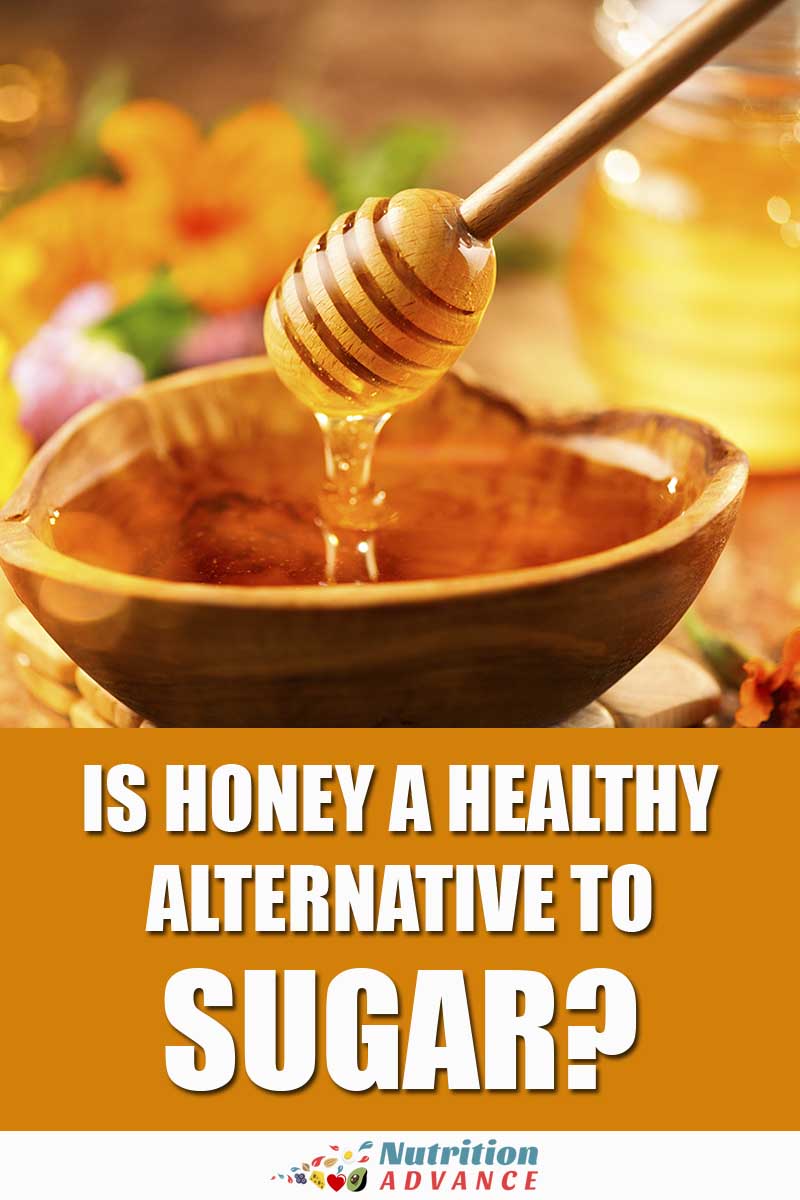 Compared to regular table sugar, honey seems to enjoy a healthier reputation as a sweetener.

While refined sugar frequently features in negative newspaper headlines, many people view honey as “natural” and a healthier choice.

However, is honey really a healthy alternative to sugar?

In this article, we examine how the two compare. 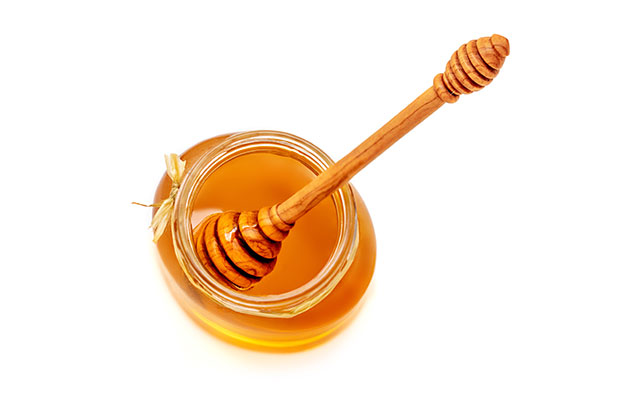 Honey is a sweet and sticky natural sweetener mainly made by bees. It has a sweetness level similar to sugar, and studies suggest that humans have been using it for at least 9000 years (1).

To make honey is quite a complicated process. Firstly, foraging bees collect nectar and pollen from flowers and take it back to their colony.

Once the nectar has the desired qualities, the bees store it in cells within the hive and thousands of bees then use their wings to generate heat within the hive.

This heat enables the water content of honey to fall from 70-80% to around 15%, which results in the sweet and sticky texture honey is known for.

People use honey in many different ways, but some of the most common uses include;

Global production figures for honey are currently close to 1.8 million metric tonnes, and the global market is worth seven billion US dollars (2).

Honey is a concentrated form of sugar, and it is not a significant source of nutrients.

However, you can see the basic nutrition profile for honey below per tablespoon (21-gram) serving (3);

Honey also contains a variety of vitamins and minerals, but these are only in trace amounts, which are not especially meaningful.

Aside from the nutritional content, honey also contains water (around 15-18%) and a variety of enzymes (4).

For a sweetener with a bit more nutritional value, molasses is a good choice.

Types of Sugars In Honey Versus Sugar

How do the naturally occurring sugars in honey compare to regular table sugar?

Firstly, sucrose (table sugar) is 100% sugar, and it is a molecule containing one part fructose to one part glucose. Sucrose is extracted and refined from plants such as sugar cane and beets (5).

On the other hand, honey is not 100% sugar since it also contains water and small amounts of nutrients and enzymes. Generally, the sugar content is around 80%.

Additionally, the exact sugar composition of honey can vary depending on the specific variety.

On this note, a recent study analyzed more than 20 samples of honey and found that the average sugar profile was (6);

That said, the individual samples in this study varied significantly between a ratio of 64% fructose to 34% glucose and 50%-50%.

Key Point: Sucrose is a molecule composed of one part fructose and one part glucose. Honey contains varying proportions of fructose and glucose, but it generally has a higher amount of fructose.

Does Honey Have Any Benefits?

Many people assume honey is healthier than table sugar since it is natural.

However, just because something is more natural does not necessarily mean it is healthier, and this is known as an appeal to nature.

That said, there are a few advantages that honey has over sucrose.

First of all, due to the water content, honey is not as concentrated a source of sugar as sucrose.

The table below shows how the two compare nutritionally per 100 grams (3, 7);

As shown in the table, honey contains fewer calories and less sugar than sucrose.

If people use equivalent serving measures, these small amounts could add up over the longer term.

Key Point: Gram for gram, honey is lower in sugar and calories than regular table sugar.

2) Honey Provides a Range of Trace Minerals, Sugar Does Not

While such small quantities of minerals are far from being a major benefit, regular table sugar does not offer these nutrients.

Key Point: There are a range of trace minerals in honey, and sugar does not provide these.

3) Honey Has a Lower Glycemic Index Than Sugar 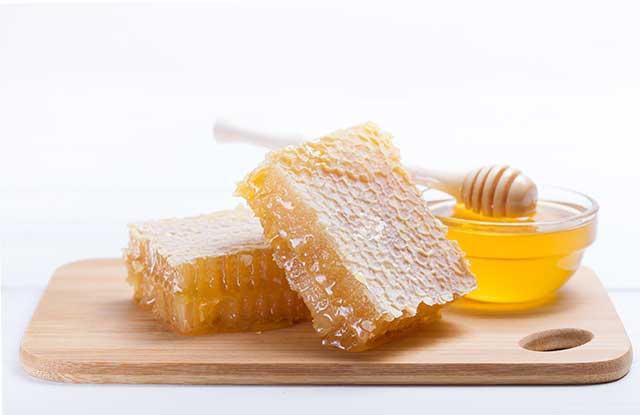 The glycemic index ranks the effect of a specific food on blood-sugar levels; the greater the glycemic rating, the more significant an impact the food has.

The reason for the wide-ranging differences in the glycemic index of honey is the ratio of fructose to glucose it contains.

Fructose has a glycemic index of only 19, while glucose is 100. Therefore, the higher the ratio of fructose to glucose in honey is, the lower the glycemic index will be (12).

Since honey (generally) has a lower glycemic index than sugar, it has less of an effect on blood-sugar levels.

Why is the Glycemic Index Important?

There are several reasons to consider the glycemic index (GI) of food.

Since the majority of honey has a lower glycemic index than sugar, those who regularly consume sugar may benefit from switching to honey.

Sweeteners like sucralose, stevia, and sugar alcohols are a better option for managing blood sugar levels since they are zero glycemic.

Key Point: Most honey has a glycemic index lower than sugar.

4) Contains a Variety of Bioactive Compounds

Honey contains a range of polyphenols, including compounds such as flavonoids and phenolic acids (16).

Interestingly, more than 200 different polyphenolic compounds have been discovered in honey samples (17).

Researchers believe these compounds have anti-microbial and anti-inflammatory properties. However, there is a lack of evidence to show these polyphenols have a beneficial impact on human health (18).

In particular, there are many health claims about manuka, which is a type of monofloral honey. Manuka honey is graded by a ‘UMF’ rating, which stands for ‘unique manuka factor’ (19).

According to the Honey Association, a higher UMF rating—which can range between 10 and 25—signifies that the honey has more substantial antibacterial properties (20).

It is worth noting that this kind of honey can be costly, and there is limited research to confirm its benefits.

Key Point: Honey contains a range of polyphenols, and some honey may have anti-bacterial properties.

Drawbacks and Side Effects of Honey

There are also some negative points about honey consumption as well as some possible side effects.

1) Fake and Adulterated Honey Is Prevalent

Unfortunately, there have been many cases where fake and adulterated honey has been discovered on the market.

For example: in 2018, a scandal dubbed ‘Honeygate’ broke out after tests demonstrated 27% of honey brands were adulterated.

Sadly, these tests found that many commercial honey brands were cut with sugar cane, corn syrup, and other cheaper sugars (22).

Even worse; tests showed that two out of two New Zealand manuka honey samples were adulterated.

According to research, honey is the world’s third most adulterated food after olive oil and milk (23).

Key Point: Honey is one of the world’s most adulterated foods. Unfortunately, tests have demonstrated that food fraud affects more than 25% of honey brands.

2) Honey Is Still a Source of Concentrated Sugar (and Calories)

Honey offers several nutrients (in small quantities) as well as a range of polyphenols.

However, it is still an energy-dense form of sugar, and it contains very little nutritional value.

While honey has some advantages over regular sugar, it isn’t significantly more nutritious.

3) Honey Is Not Suitable For Very Young Children

Foodborne botulism is a serious disease classed as a medical emergency (24).

Botulism spores naturally occur in soil, but honey can also contain these spores (25).

While most people have a degree of immunity to botulism spores, young babies have not yet developed this immunity.

For this reason, the Centers for Disease Control and Prevention (CDC) recommend that children under 12 months old do not consume honey (26, 27).

Key Point: According to governmental health advice, honey shouldn’t be given to infants before their first birthday.

4) The Medicinal Properties of Honey Are Exaggerated

While there are many claims about the medicinal properties of honey, there is very little clinical human research available.

The majority of studies showing potential health benefits have been in vitro (test tube/cell) and animal studies (28, 29).

Key Point: There are many claims about honey’s anti-inflammatory and disease-fighting abilities. However, there is a lack of available research to support the claims.

All in all, it is probably fair to say honey is a slightly healthier alternative to sucrose. It contains trace amounts of essential nutrients, and it has a lower glycemic impact.

That said, honey is still a significant source of sugar and it is very energy-dense.

For those that enjoy eating honey, there is nothing wrong with small amounts, but less is probably better.

Generally speaking, a tablespoon of honey contains more calories and sugars than a piece of fruit, yet does not offer as much nutritionally.

Artificial and Natural Sweeteners: A Guide To 19 Popular Options

Is Molasses Good For You?

What Is Sucralose and Is It Safe?

Monk Fruit Sweetener: Is It a Healthy Choice?

Thanks for the detailed article. I tried some honey supplements a while back and found not much if any difference, now I think i know why.

Yes… that doesn’t really surprise me too much.