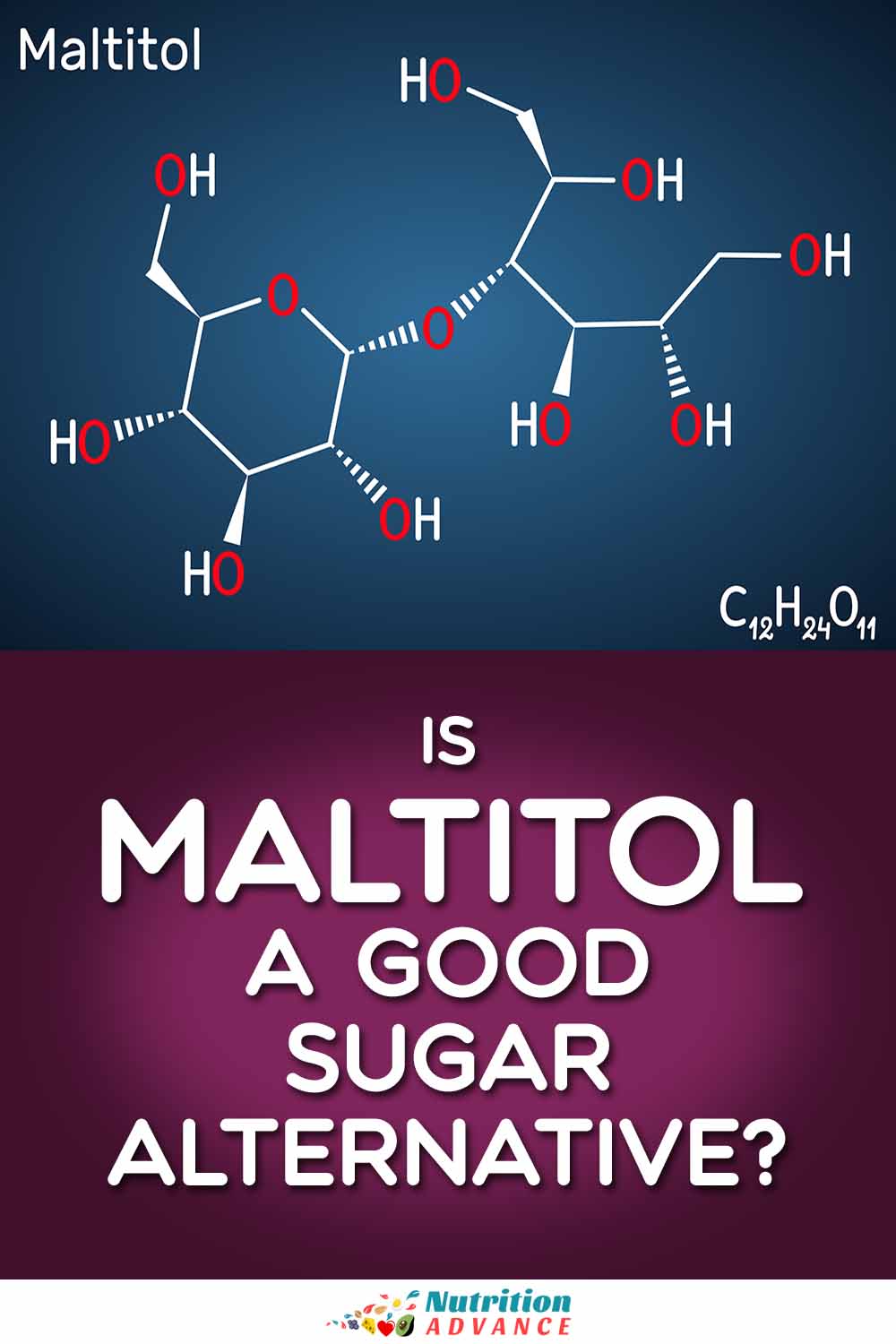 Maltitol belongs to the ‘sugar alcohol (polyol) category of sweeteners, similar to erythritol and xylitol.

However, maltitol has its own distinct properties, quite different from the sweeteners mentioned above.

This article provides a guide to maltitol, its properties, and how it compares to other sweeteners and regular sugar.

Is it a good sugar alternative?

Before we begin to look at the characteristics of maltitol, let’s first examine what it is and its production process.

Maltitol is a sweet, white crystalline powder produced from the hydrogenation of maltose.

Maltose is a type of disaccharide (sugar) created from the breakdown of starches, typically from cereal grains or sweet potatoes (1, 2).

Structurally, maltose contains two glucose molecules linked together by a bond. After hydrogenation, it becomes maltitol, which contains a glucose and sorbitol molecule bonded together (3).

Maltitol is partially indigestible by enzymes in the small intestine, known as disaccharidases, that break down complex sugars into simple sugars (such as glucose). Instead, the maltitol passes through to the large intestine, where gut bacteria ferment it (4, 5).

Since maltitol is not fully digested, it has a lower caloric content. In other words, consuming equivalent amounts of maltitol will not lead to the same energy intake as table sugar.

Maltitol can also come in the form of maltitol syrup. Notably, it has a slightly higher glycemic index of 52 in its liquid form (8).

Additionally, maltitol syrup has a similar production process and relies on the hydrogenation of corn syrup.

However, maltitol tends to be more common in its crystallized powder form.

Key Point: Maltitol is a low-calorie sweetener and it is a type of sugar alcohol (polyol). The sweetener has a glycemic index ranging from 29-52, depending on whether it is a crystalline powder or syrup.

How Does Maltitol Compare To Regular Sugar?

As previously mentioned, there are some key differences between maltitol and regular sugar:

Per gram, the energy content of maltitol is 2.1 – 2.4 calories, whereas table sugar is four calories. Therefore, if we calculate the caloric content of a typical teaspoon (4-gram) serving, the difference would be as below:

As we can see from this example, the caloric difference between sugar and maltitol will increase more with higher intakes.

Interestingly, maltitol has a lower melting point than sugar.

For those who wish to use the sweetener for baking or cooking, this means that maltitol can be a direct replacement for sugar. In addition, there will be no need to worry about the maltitol not melting at typical temperatures.

Although very similar, maltitol is not quite as sweet as sugar.

According to research, maltitol has a relative sweetness of approximately 90% that of table sugar (10).

Thus, maltitol can be used as a natural gram-for-gram sugar alternative if users don’t mind a slightly less sweet taste.

That said, just adding approximately 10% more maltitol than the amount of sugar a recipe calls for would neutralize this difference in sweetness.

Additionally, maltitol only has a very minimal cooling effect in the mouth compared to other sugar alcohols like erythritol and xylitol.

Some people don’t mind this cooling effect, but foods using erythritol or xylitol can taste quite different from foods sweetened with table sugar for this reason. In other words, maltitol will offer a taste experience closer to that of regular sugar.

Key Point: Maltitol tastes similar to sugar despite having a lower energy content, a smaller glycemic index, and a lower melting point. For this reason, maltitol can replace sugar in recipes on a gram-for-gram basis.

Maltitol Is a Glycemic Sweetener and Will Raise Blood Sugar Levels

Maltitol is a glycemic sweetener, unlike sweeteners like aspartame, sucralose, and stevia.

Since maltitol is partially digested, consuming it will impact blood sugar levels.

For this reason, human trials have demonstrated that maltitol does not cause as significant a spike in blood glucose levels as sugar/glucose. However, it is vital to be aware that maltitol increases blood sugar levels (11, 12, 13).

Sadly, the ‘sugar-free’ labels on many maltitol-containing products could potentially be misleading in this sense. Just because maltitol isn’t sugar does not mean it can’t increase blood sugar levels.

It is essential for individuals trying to regulate their blood sugar levels to be aware of maltitol’s glycemic impact and take it into account.

Key Point: Maltitol is a glycemic sweetener and it will have an impact on blood sugar levels.

Owing to its unique characteristics, maltitol has some potential benefits for those using it.

Maltitol has a taste much closer to table sugar than other sugar alcohols.

Using maltitol as a direct replacement for sugar may also decrease total calorie intake and help contribute to weight loss.

That being said, most people should not be consuming substantial amounts of sugar (or maltitol), so this effect would likely only be very slight.

Additionally, using a calorie-free sweetener like aspartame or a lower calorie sweetener, such as erythritol, would provide more benefits in this regard.

May Inhibit Oral Bacteria and Reduce the Risk of Dental Caries

It is no secret that excessive sugar intake can increase the risk of dental caries, also known as ‘tooth decay’ (14).

On the positive side, this is not the case with sugar alcohols like maltitol, which is why we can often find these sweeteners in chewing gum.

The US Food and Drug Administration (FDA) noted that this is because maltitol is non-cariogenic. To explain further, this means that “bad” oral bacteria cannot metabolize maltitol in the way they do with sugar (15).

Since the oral bacteria cannot metabolize maltitol, they cannot produce acids, and thus dental plaque is not as easily formed as with sugar.

Interestingly, a randomized controlled trial found that the frequent use of maltitol-containing chewing gum inhibited some bacterial species associated with tooth decay. However, uncertainty existed over the effects on longer-term plaque accumulation (16).

Other studies have looked into this issue, and the findings appear to show that maltitol may lower dental plaque. However, it was difficult to detect an additional benefit of using maltitol in oral conditions unfavorable to the development of caries (17, 18).

In other words, the researchers are saying an additional benefit is unlikely in individuals who have good oral hygiene and follow a healthy eating pattern.

Key Point: Maltitol may potentially help to improve oral health and lower the risk of developing caries. However, researchers note that good oral hygiene is the most important factor for lowering risk.

Similar to most foods and sweeteners, maltitol can have potential downsides too.

Aside from its impact on blood sugar levels, maltitol may cause some digestive intolerance symptoms at higher doses.

Research has demonstrated that maltitol can have a laxative effect at high doses and cause diarrhea.

In a human trial featuring 12 participants aged between 18 and 45 years old, high doses of maltitol caused diarrhea in most participants (19).

Importantly, low to moderate doses did not see this effect.

In the study, the daily dose of maltitol was increased by 10 grams each week until diarrhea symptoms presented.

The results were as follows:

When discussing the study, the researchers pointed out that these dosages were consumed all in one go. For this reason, spreading the dosage throughout the day may not have the same effect.

Additionally, maltitol doses of less than 50 grams per day did not cause any digestive symptoms of note.

Key Point: Significant doses (>50 grams per day) of maltitol may lead to gastrointestinal issues such as diarrhea.

Here are some more common queries regarding maltitol and its properties.

1) Can maltitol help with weight loss?

The answer: it depends. Significant effects are unlikely, but all else being equal, if an individual replaced their sugar intake with maltitol, they would lower their energy intake. Over time, this may lead to slight weight loss. However, using a zero-calorie sweetener would have a better effect than maltitol.

3) Is there an acceptable daily intake (ADI) for maltitol?

An ADI has not been established for maltitol, and aside from digestive issues at higher doses, there is little evidence of harm. The Joint FAO/WHO Expert Committee on Food Additives (JECFA) extensively studied maltitol and decided to give it an ‘ADI not specified’ rating (20).

Is Maltitol a Good Sugar Alternative?

In summary, answering the question “is maltitol a good sugar alternative?” depends on the circumstances and what someone wants from a sweetener.

If looking for a sweetener that:

and the following don’t matter:

Then maltitol may be a good alternative to sugar as a sweetener.

However, there are many different sweeteners available, and if maltitol doesn’t meet the above criteria, there are arguably better alternatives.

19 Types of Sweeteners: How Do They Compare?

What Is Xylitol? A Review of the Benefits and Side Effects

What Is Erythritol and Is It a Healthy Sweetener?

Is Aspartame Bad For You? An Evidence-Based Guide

What Is Sucralose and Is It Safe?

Is Stevia a Safe Sweetener? Health Benefits and Side Effects