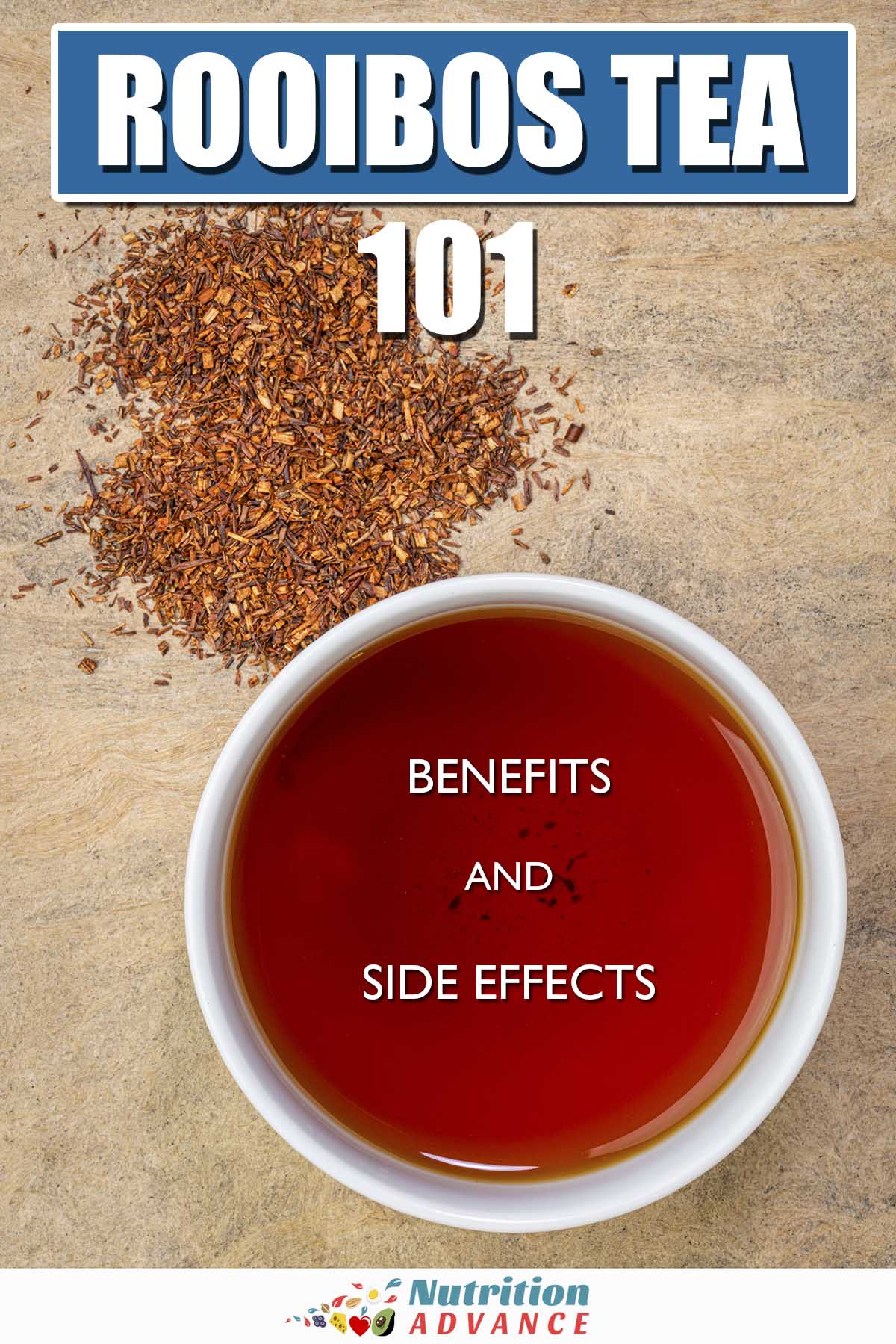 Rooibos is a refreshing herbal tea that comes from the Cederberg mountains in the Western Cape of South Africa.

Otherwise known as ‘redbush tea’ or just ‘red tea,’ the drink is famous around the world.

There are also many claims of health benefits, but which of these are supported by science?

This article presents a complete guide to rooibos tea and its potential benefits and side effects.

What Is Rooibos Tea? 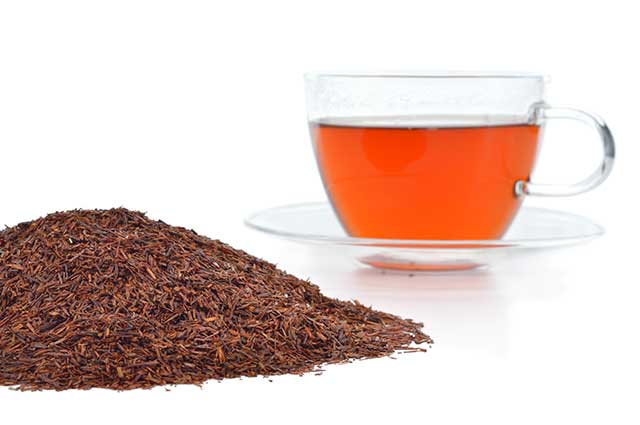 First of all, unlike green and black tea, rooibos is not known as a ‘true tea’ because it does not come from the Camellia sinensis plant.

Instead, rooibos is a type of herbal tea.

Rooibos tea comes from the dried leaves of the rooibos plant, also known by the scientific name of Aspalathus Linearis (1).

To make rooibos tea, the leaves of the plant undergo an oxidation (fermentation) process.

During this fermentation process, an enzymatic process occurs which causes the leaves to turn the rusty red color that rooibos is famous for. The leaves are left to dry in open fields under the sun.

However, it is worth noting that rooibos tea comes in two distinct forms; green and red.

The green version does not undergo an oxidation process, but it is more challenging to produce and has a strong bitter taste (2).

For this reason, red rooibos tea is significantly more popular (and prevalent) than green rooibos, and it is the focus of this article.

Rooibos tea is closely related to honeybush tea, and they are both forms of red tea.

If a slightly milder and sweeter tea sounds interesting, you can find more information on honeybush tea here.

Rooibos has a light flavor, and it does not have the same bitter notes as green and black tea because it contains fewer tannins (3).

Although it is difficult to describe the flavor accurately, rooibos has a fruity, nutty, floral, and slightly sweet taste.

How To Drink It

For instance, some people like to drink pure rooibos, and others prefer to serve it with a small amount of milk and possibly sugar.

Key Point: Rooibos is a flavorful herbal tea that is caffeine-free and people enjoy drinking it either alone or with milk.

Due to the various compounds it contains (or doesn’t contain), rooibos tea may have several benefits.

While caffeine can have various benefits such as enhancing focus, it can also have adverse effects on some individuals.

For instance, some people metabolize caffeine very slowly, and it can interfere with good sleeping habits (4, 5, 6).

Additionally, some individuals appear to suffer from caffeine sensitivity, symptoms of which may include anxiety, gastrointestinal symptoms, nervousness, and more (7).

For such people, rooibos could be an excellent alternative to tea or coffee.

It is also worth noting that the American Pregnancy Association recommend no more than 200 mg of caffeine per day (8).

Generally, 200 mg of caffeine would mean a maximum of one cup of coffee, so rooibos may be a good caffeine-free alternative during pregnancy.

For more caffeine-free tea options, rose tea may be worth a look.

Key Point: Rooibos is a suitable drink for those who wish to limit their caffeine intake.

Contains a Wide Range of Polyphenols

Rooibos is a rich source of polyphenols, which are bioactive compounds that may have benefits for human health (9).

Various cell (test tube) and animal studies suggest that these compounds may have health benefits.

For instance, these polyphenols have been shown to have anti-cancer properties in skin cells (11, 12).

However, it is important to note that studies using cells outside of living organisms and studies in rats are not equal to research using human participants.

Therefore, adequate human studies would be required to confirm these (potential) benefits transfer to humans.

Key Point: Rooibos contains a range of polyphenols that may offer benefits.

Suitable For People Who Have Issues With Oxalates

Oxalates (oxalic acid) are a type of anti-nutrient found in certain plant foods.

Tea and coffee are very high in oxalate, and they are both significant contributors to average dietary oxalate intake (15).

While oxalates are not usually a big issue for healthy individuals, some people may need to follow low oxalate diet plans.

Generally speaking, these low-oxalate diets are prescribed to patients with kidney stones or those at risk of stone recurrence.

On the positive side, rooibos tea does not contain oxalic acid, so it is a suitable tea for low-oxalate diets.

Rooibos Is Lower In Tannins Than Regular Tea

Tannin, also known as tannic acid, is a type of polyphenol with a strong, bitter taste. We can find tannins in various foods, and tea and wine contain particularly high amounts (17).

While tannins may have various benefits, they can also bind the minerals zinc and iron.

In other words; consuming a source of tannin alongside food containing iron and zinc may affect the bioavailability—the amount we absorb—of these two minerals (18).

For example, clinical trials show that drinking tea with a meal reduces iron absorption compared to eating a meal alongside water (19).

One study compared the effect of rooibos intake with green tea and water on iron absorption.

The table below shows the mean iron absorption when consuming iron alongside either green tea, rooibos, or water (22);

As shown, rooibos only had a small inhibitory effect upon iron absorption.

For this reason, rooibos may be a better alternative to green and black tea for those concerned about iron status.

Key Point: Rooibos contains only small amounts of tannin, and it has little impact on iron absorption.

May Improve Markers of Cardiovascular Health

Overall, there are a limited number of human trials on the effects of rooibos.

However, one controlled clinical trial investigated the effects of rooibos in adults with a high risk of cardiovascular disease.

In this study, a relatively large amount of rooibos—six cups per day for six weeks—had a beneficial impact.

The results found that in 40 participants who completed the study, this large intake of rooibos (23);

Studies suggest that a lower ratio of non-HDL to HDL and triglycerides to HDL are both associated with reduced cardiovascular risk (24, 25).

Key Point: Large intakes of rooibos may lead to beneficial changes in markers of cardiovascular health.

Provides Some Essential Minerals (But Only In Small Amounts)

There are claims that rooibos contains many different minerals, but how true is this?

Firstly, rooibos does provide several essential minerals, but these are only available in low amounts equal to less than 1% of the recommended intake.

However, since these minerals are only present in trace amounts, rooibos should not be seen as a “good source” of nutrients.

Key Point: Rooibos contains a range of minerals, but they are not present in high enough amounts to significantly contribute to nutrient intake.

Side effects and Concerns 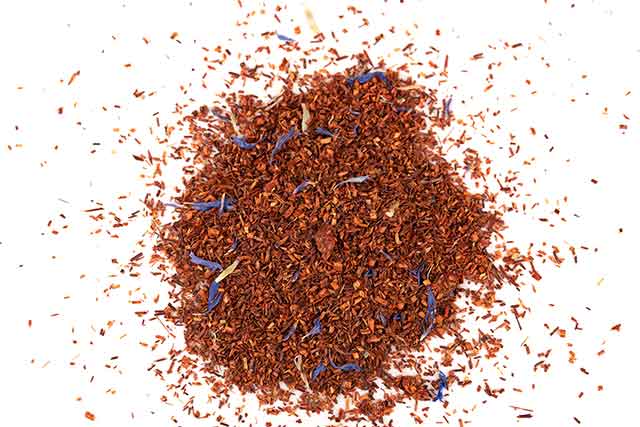 In addition to the benefits of rooibos, there are one or two concerns and potential side effects of drinking the tea.

May Have Estrogenic Activity

Some research demonstrates that rooibos can slightly increase the production of the female hormone, estrogen.

According to researchers, this estrogenic activity is a result of several flavonoid compounds that rooibos contains, including luteolin and orientin (30, 31).

While the absolute effect on estrogen production is only small, it may be an important consideration for individuals with hormone-sensitive illnesses.

For instance, the respected Memorial Sloan Kettering Cancer Center notes that “patients with hormone-sensitive cancers should use caution before taking rooibos” (32).

Research shows that in rare cases, rooibos tea has had a hepatoxic effect. In plain English, this means that rooibos has caused injury to the liver.

Two separate case studies, of a 42-yr-old woman and a 52-yr-old man, suggest that rooibos intake significantly increased liver enzymes and led to symptoms such as jaundice (33, 34).

In both of these cases, liver enzymes normalized after the patients stopped drinking rooibos tea.

While this sounds scary, there are only two reported case studies, and millions of people have drunk rooibos without issues.

While rooibos tea may have potential benefits, the strength of clinical evidence from human trials is limited.

Overall, rooibos tea is a delicious and refreshing herbal tea, but we should probably think of any benefits as a potential bonus.

For more on herbal tea, see this review of chaga mushroom tea.